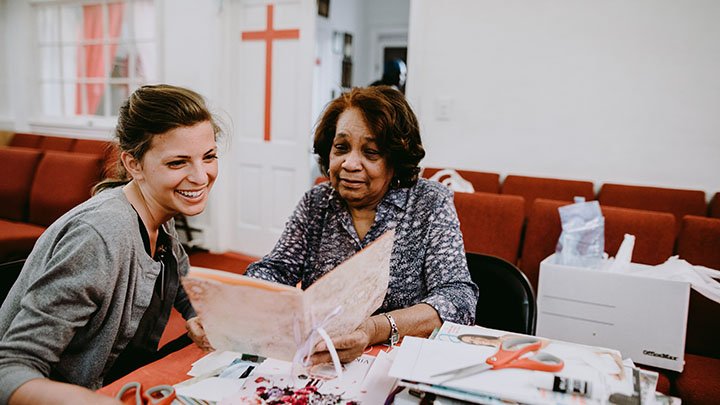 The Calvin College nursing department has been listening to their neighbors in Grand Rapids for years. Faculty and students have worked alongside a few core-city communities in providing both education and health-related services for an array of public health issues. In recent years, a new concern was voiced: mental health. And faculty took notice.

And coming out of these focus groups, it was clear that the women desired education and support around these issues. So Doornbos says she and her colleagues took their neighbors input and concerns as marching orders, and they created a curriculum that entailed all of the things the women said they wanted to learn. And, with the help of students, began to teach.

“Nursing at Calvin is not ‘can I use people to practice my teaching/skills?’” said Doornbos. It’s ‘this is what our neighbors want and have asked for,’ and that changes the whole dynamic. We believe that our neighbors can identify both their concerns and the potential solutions.”

In fall 2011, a five-year pilot study: “Women Supporting Women: Supportive/Educative Groups for Ethnically Diverse, Urban, Impoverished Women Dealing with Depression and Anxiety” was launched in all three neighborhoods. The program included six sessions, each 90-minutes in length, spanned over four months each semester. The goal? To see an increase in the mental health self-care of the women in the program.

“One of the barriers for these women was they didn’t have any medical coverage to cover a counselor or a therapist, and they needed to see someone for therapy, they were high risk, some suicidal,” said Veronica Quintino, a community health worker who is working with Calvin
in the Burton Heights neighborhood. “I saw the change [in these women] within weeks of them being in the program, saw how the depression was getting better, how they were taking the tools and applying them.”

While Quintino speaks highly of the program now, she wasn’t always an ardent supporter. When she first heard of Women Supporting Women, she was working as a social worker at Cherry Street Health Services. She said one of her clients who was struggling with mental health issues was having a hard time getting the help she needed. Quintino didn’t know much about the Calvin program, and she had some preconceived notions about Calvin College. But, she says she was desperate to find help for her client. So, she went with her to a meeting in Burton Heights. It didn’t take long for her to go from skeptic to advocate, shattering her stereotypes along the way.

“I always had stereotypes of Calvin College, but working with them and seeing them really implement the mission and vision … has taught me … that Calvin does care about the community, and [they] do teach students to be culturally competent,” said Quintino. “They practice their faith and value every individual as somebody who is a son and daughter of God. That’s one of the biggest learnings. I was stereotypical, but my client really needed someone. But I learned so much, and that’s why I keep coming back.”

And it’s why a couple of years ago she recruited Miss Josie, another community health worker in Burton Heights, who spent nearly 40 years working as a community liaison for Grand Rapids Public Schools serving in many roles including as a para pro and a translator.

“I’ve never seen a college like Calvin College,” said Miss Josie. “They are truly … it’s just like I’m in church, if not better. I’ve never felt so much love and so much interest. Everyone is important to them. I’ve never felt that.”

A year after the first pilot study was completed, the results are in, and the program has been deemed a resounding success. Utilizing data from pre-testing and post-testing, organizers found that participants experienced a significant increase in knowledge for self-care for depression and anxiety and a significant decrease in anxiety and depression symptoms. And the women were highly satisfied with the intervention.

So much so, that some have asked to go through the program again, and many have become ambassadors for the program in their community.

“We teach them how to fish, instead of just giving them a fish. We encourage them to keep connecting with each other, continue building relationships they established while in the program,” said Quintino.

And the program has been a partnership every step of the way. The community health workers serve as facilitators, and Calvin College nursing students do much of the teaching under the supervision of Calvin faculty.

And in the past year, Women Supporting Women, taking the feedback from its partners in the community, has taken on more of an interdisciplinary approach, now incorporating an art project into the program: a book, created by the women, that helps map their journey with mental health issues.

Morgan Quist, a nursing major and studio art minor, is facilitating the art project alongside art professor Anna Greidanus in the Baxter/Madison neighborhood. She’s seen this really augment the education around mental health.

“We’re trying to reinforce what the nursing students teach them about depression, anxiety, the need to take breaks, take time for themselves, that creativity is individualized and that what they make is valuable. We’re trying to tell them these messages through the art,” said Quist.

“Sometimes they can’t say it, but they can write it down, how they are feeling. It’s helped them a lot,” said Miss Josie.

“As you are doing the artwork you are able to express your ideas and feelings, and at the end you feel a sense of completion, accomplishment,” said Quintino.

For Quist, she is seeing how her passion for art and science are working together in meaningful ways.

“People always say science and art are so different, but to me they always seem to overlap in really unique ways,” said Quist. “My chemistry lab is so similar to the ceramics studio. Whether I’m working with glazed formulas or science experiments, there’s similar creativity in both, just manifested in different ways.

“And, in nursing, you have to individualize your care, but there’s also this scientific, research-based care—it’s the melding metaphorically of art and science. And this [project] is very tangible art—looking at the person holistically and promoting self-esteem and empowering them. I feel creativity is a way to do that,” said Quist.

Now that the pilot study is complete, the Women Supporting Women program will be repeated for five more years with the immediate goal of verifying and validating the successful results of the first five years. If the results are consistent, organizers say this could serve as a model to be used in other urban settings with other schools of nursing.

“I think this is Calvin’s mission coming alive,” said Doornbos. “[Provost] Cheryl [Brandsen] talks about robust learning experiences. This is it—real life experiences where students engage in nursing practice with persons from cultures different from their own.

“I don’t think that it gets better than this in terms of students taking what they are taught in nursing, in the Honduras semester [Spanish language skills used in the Burton Heights group), and in art classes and using it to meet real needs of real people.  They learn the reality of the research process, what cultural sensitivity entails, what vulnerability looks like, and how to pursue justice as an agent of renewal in the Kingdom of God,” added Doornbos.