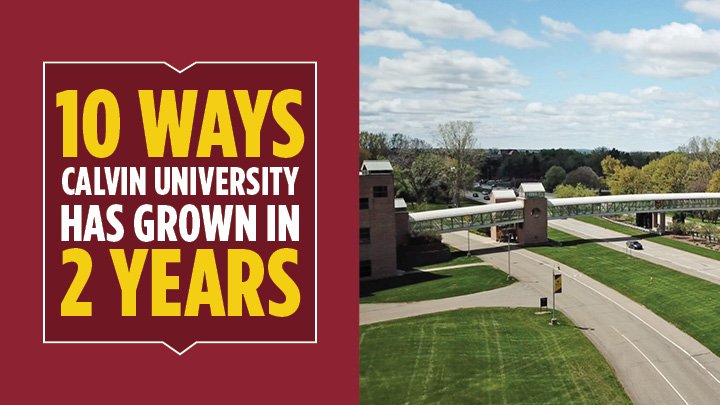 On July 10, 2019, in a grand celebration, Calvin announced the changing of its last name from “college” to “university.” This move was part of Vision 2030. In short, its goal is to allow the mission of Calvin to be accessible to a greater diversity of learners worldwide through becoming a university, becoming a trusted partner, and through deepening and strengthening the institution’s commitment to Reformed Christian faith. There’s no question that in just two years, Calvin is leaning into this new vision. Here are ten of the ways Calvin has done so in just 24 months.

2. Established the School of Business, the first school in the university structure. In March 2021, Calvin broke ground on the new $22.25 million building

3. Launched The de Vries institute for Global Faculty Development in an effort to deepen and strengthen the university’s commitment to the integration of faith and learning.

4. Completed two of the best fundraising years in Calvin's 146-year history, including a record-shattering 2020 with $64.3 million in gifts and new pledges.

5. Graduated the first two cohorts from the Calvin Prison Initiative program marking the first time in the history of the state of Michigan that inmates earned bachelor’s degrees behind bars.

6. Launched the Spanish Immersion program allowing high school students who are fluent in Spanish to have the opportunity to earn a minor in Spanish before coming to college.

8. Calvin opens new doors for students with disabilities. A $1.2 million grant from the U.S. Department of Education puts Calvin on a path to be the first university in Michigan to offer a Comprehensive Transition and Post-Secondary program.

9. Calvin led during a pandemic. It developed a playbook for reopening for private institutions in Michigan, developed summer courses to help churches and citizens navigate living in a COVID-shaped world, secured a first-of-its-kind partnership with a diagnostics company, opened up its on-campus conference center for first responders, became a vaccination clinic, and rallied community members to serve outside of their normal job areas to ensure students could live and learn on campus during 2020-2021.

10. Calvin students became Fulbright and Goldwater scholars, Lilly and Hertz Fellows, and even helped develop a patent for Toyota. And professors continued to advance scholarship and receive top honors in their fields, from being named a fellow of the American Academy of Nursing to receiving the rank of chevalier from the General Consul of France.