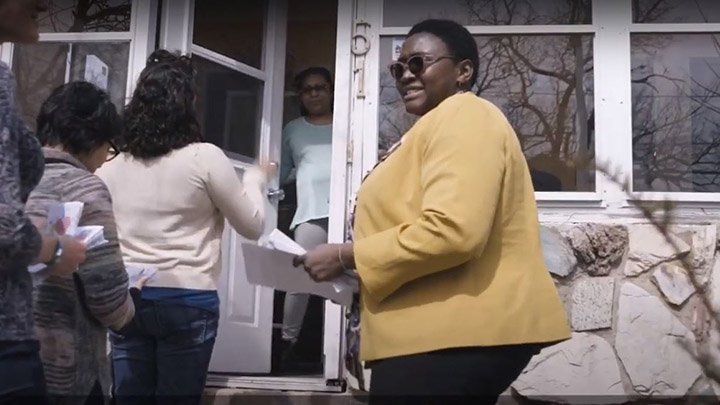 Note: This photo was taken before COVID-19 restrictions were in place.

On Saturday, October 31, 2020, Adejoke Ayoola, professor of nursing at Calvin University, will be inducted into the 2020 Class of Fellows of the American Academy of Nursing. The induction takes place during the organization’s annual Transforming Health, Driving Policy Conference.

Ayoola is one of three nursing professors in the state of Michigan and among just 230 distinguished nurse leaders around the world to be recognized for their significant contributions to health and health care. The honor is a significant milestone in her profession.

“When I saw the email (this summer) I was like, ‘wow,’ I was blown away, and I started worshipping God. It’s a great honor, a recognition of a lifetime of work,” said Ayoola. “When someone is considered to be a fellow, it means that many people have reviewed your work, and they feel that you are making an impact not only nationally, but internationally. I was just so very happy, and I give God all the glory for this, for the work that I’ve been doing with all my colleagues, for it to be acknowledged at this level.”

The recognition is significant—among the greatest honors one can receive from their peers in the nursing profession. But it’s not this distinction that brings Ayoola the most joy … it’s the progress that she, her colleagues, and her students have been making in improving women’s health.

It’s a journey that started back in Nigeria, where Ayoola grew up. She saw firsthand the health issues faced by women, particularly related to reproductive health. “I’ve seen a lot of women who have died in Nigeria. Every time I think of it, it pains me,” she said.

So, Ayoola got to work. She earned her bachelor’s and master’s degrees in nursing from Obafemi Awolowo University in Nigeria, and then moved to the United States in 2003, earning her doctorate from Michigan State University in 2007. That same year, she started in Calvin’s nursing department, where she now serves as the department chair.

In 2008, Ayoola helped start a discussion on women’s health between Calvin’s nursing department and women in three Grand Rapids neighborhoods (Baxter/Madison, Creston/Belknap, and Burton Heights). She started by asking the women what they believed they were in need of and how Calvin could help partner to meet those needs.

One of the concerns raised was unintended pregnancy. In response, in 2012, Ayoola created the Preconception Reproductive Knowledge Promotion program, or PREKNOP. Funded by the Robert Wood Johnson Foundation, this program allowed Calvin nursing students under the supervision of Calvin faculty and staff to teach women about the many aspects of reproductive health.

The success of this program led the women to yearn for more. They desired for their daughters to be taught the same things. This led to, in 2016, Ayoola helping establish the annual H.E.A.L.T.H. Camp (Health, Education, and Leadership Training for a Hopeful Future), an interdisciplinary camp with the goal of promoting a culture of health among young girls.

And the list of initiatives goes on. But the approach remains the same. Listen first. Then, design culturally relevant programs to address the spoken concerns.

Ayoola’s made a big investment in Grand Rapids neighborhoods, working alongside her colleagues and students to equip and empower women to make better choices for their own health and the health of their families.

And she’s also placed a premium on investing in her students, which has yielded great returns.

“It’s so exciting to involve students in this work. They are the next generation. They are seeing nursing research in action, and not just research, but together we are actually interviewing residents and addressing their real-life concerns,” said Ayoola. “Many of our nursing students are now doing wonderful work all over the U.S., presenting at national conferences, some grads are assistant professors now or in PhD programs and sharing their own perspective about being involved in real-life research right in the community, real intervention in community.”

And while Ayoola has been invested in helping women flourish in the Grand Rapids community, she’s been helping communities across the U.S. and world design PREKNOP and HEALTH camp programs that are relevant to their cultural contexts. And, in recognition of her expertise in maternal health research and innovative designs of community-based interventions, Ayoola has started collaborative projects in African countries, including in her home country of Nigeria.

“I’ve seen a lot of women go through tough times,” said Ayoola, reflecting specifically on growing up in Nigeria. “And I think of Christ, He’s come to give us life, so what can I do myself being a woman, and what can we do to improve women’s health? Those are questions that got everything started for me.”

Ayoola not just asking, but acting on those questions, has and continues to shape generations of women. 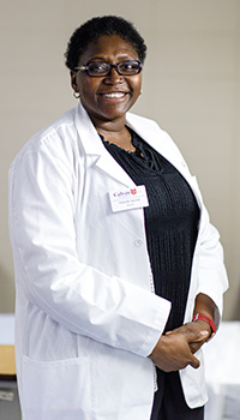