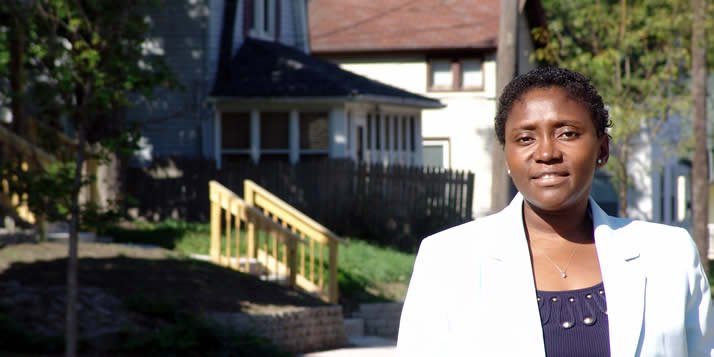 Calvin nursing professor Adejoke Ayoola still thinks about the young mother she met four years ago in a focus group she held in a Grand Rapids neighborhood. The young woman, cradling a baby and tending a toddler, was hugely pregnant with her third child. She confessed herself exhausted by the demands of the family she already had. “How can I recognize this pregnancy?” she asked Ayoola.

“I cried all the way home, and the next day, I cried all the way from home to work,” Ayoola remembered the event. That 2008 incident has been a motivator for her research, much of which is focused on equipping women to have better reproductive health and birth outcomes. Recently, Ayoola landed a $350,000 grant from the Robert Wood Johnson Foundation Nurse Faculty Scholars program to fund her study of promoting reproductive health among women of child-bearing age that are at risk of having unplanned pregnancy.

“Our goal is to increase women’s understanding of their bodies and their self-efficacy,” she said. “We hope with that knowledge, that they will also be able to recognize their pregnancy early and to better plan pregnancy.” Around 49 percent of pregnancies in the U.S. are unplanned, according to a recent study by the Guttmacher Institute.

Ayoola will work in the three Grand Rapids neighborhoods—Creston, Baxter and Burton Heights—where, for years, Calvin student nurses have done their practicums. Students will also work on the project, partnered with community health workers from those neighborhoods.

“This research will be woven into the community-focused practicum course, so nursing students will participate in this exciting opportunity promoting the health of our city,” said Gail Zandee, the community program coordinator for the project. "This is a very prestigious award for Joke that will positively impact both our nursing students and our community. We are all so proud of her for this accomplishment."

The teams will study a sample of 120 women, aged 18–44 years old, gauging what they call “Preconception Reproductive Knowledge Promotion.” In the first stage of the project, the students and community health workers from each of the neighborhoods will administer surveys and do face-to-face interviews.

They will question the women on both demographic information—age, race, number of children, marital status, household income, etc.— and lifestyle information: contraceptive use, incidence of unprotected intercourse, pregnancy planning . They will also query the women on their knowledge of their own bodies: menstrual cycles, hormones, ovulation, the anatomical structures important to reproduction and other key issues of reproductive health.

“Usually, ovulation test kits are used by “women trying to get pregnant,” Ayoola said. “We’re using it to make them aware of their bodies.” The hypothesis for her study is that giving women a thorough knowledge of their reproductive health will help them to both better plan their pregnancies, decrease the risk they’ll have an unplanned pregnancy— and to recognize their pregnancies early ( by 6 weeks). In all, the teams will make nine home health visits to the participants in the study.

One of the main reasons for unplanned pregnancy, Ayoola said, is contraceptive failure: “Some women do not use contraceptives for fear of side effects. At times using condom is seen as a sign of distrust among the partners. Some cases are just failure—inconsistent use of contraceptives. Some are switching between methods.”

The strategy for the RWJF-funded study is based on the feedback from a study Ayoola conducted in 2008 in the three partner neighborhoods. Dubbed the Pregnancy Recognition Project, the study included focus groups with women of childbearing age. (It was in this initial study that Ayoola met the young mother-of-three to be.)

If the intervention proves successful in empowering women to take charge of their reproductive health, Ayoola hopes to extend it into the Heartside neighborhood: Calvin’s newest community partner. “Hopefully, we’ll be able to use it as a model for the whole country,” she said.

Ayoola came to the U.S. from Nigeria in 2003 to earn a PhD in Nursing from Michigan State University. In her home country, which has a 28-percent rate of unplanned pregnancy, she focused her research on female genital mutilation and childhood illnesses.

Of her current work Ayoola said, “I see so much hopelessness.” She takes Jeremiah 29:11 as her guiding verse: “'For I know the plans I have for you,’ declares the Lord, ’plans to prosper you and not to harm you, plans to give you hope and a future.’” She wants to give women hope.

“Women can also be active participants in taking care of themselves and in giving their children a future,” she said. 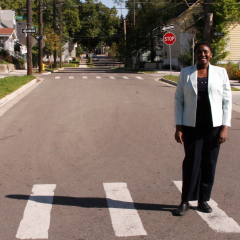