A journey from simple questions to generations of wisdom 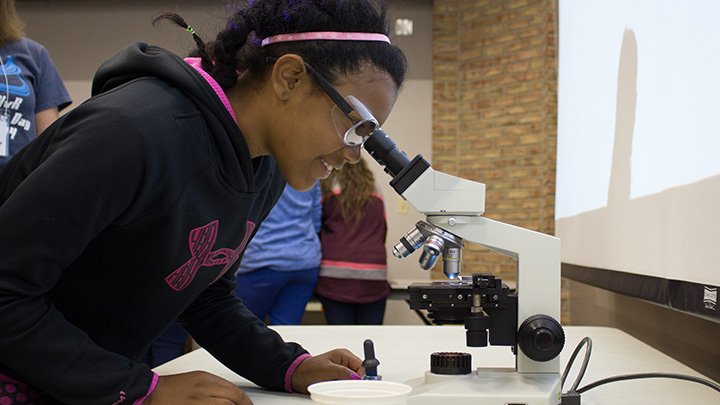 Author Leo Buscaglia once said, “Too often we underestimate the power of a touch, a smile, a kind word, a listening ear, an honest compliment, or the smallest act of caring, all of which have the potential to turn a life around.”

In 2008, Calvin College nursing professor Adejoke Ayoola promoted some of those kind, simple gestures by starting a discussion on women’s health promotion between the Calvin nursing department and women in Grand Rapids, Michigan.

In this first series of focus group discussions, the nursing department asked women from the Baxter/Madison, Creston/Belknap and Burton Heights neighborhoods what they believed they were in need of, and what a partnership in meeting those needs looked like. What would eventually become a journey of discovering more about themselves, their health and the Lord first began with one topic of interest: reproductive health.

Addressing one of their earlier concerns, unintended pregnancy, Ayoola created the Preconception Reproductive Knowledge Promotion program, or PREKNOP, in 2012. Funded by the Robert Wood Johnson Foundation, Calvin nursing students, under the supervision of faculty/staff members, taught women about the many aspects of reproductive health.

Though all was going well, this program triggered eagerness in the women for more information. They then requested for their daughters to be taught the same things.

In March 2015, Ayoola began collaborating with Laura Champion, the medical and administrative director of Calvin’s Health Services, in thinking about how to make this happen.

Ayoola, a Robert Wood Johnson Foundation Scholar, then brought other nursing department professors, including Barbara Timmermans, and many other campus departments into the discussion, leading to the creation of the H.E.A.L.T.H. Camp: Health, Education, and Leadership Training for a Hopeful future.

The camp is free for girls between nine and 15 years old and fueled by the goal of promoting the culture of health, educating girls about their bodies, broadening their vision for their future, and helping them ponder what God might be calling them to in their part of building the kingdom.

The camp took place on Calvin’s campus from June 20-24, 2016. The 50 girls, divided by age into three groups, were provided lunch and transportation to and from camp.

In a physical assessment session on the first day of camp, nursing professor Jaclynn Lubbers taught the girls how to check vital signs just like an actual nurse. Sitting in a circle of chairs, Lubbers demonstrated how the campers could take their own pulse with two fingers on their wrist.

Each girl tried their hand in taking their pulse, with many of their eyes widening. “Whoa!” one of the girls shouted, smiling as she compared her pulse with some girls nearby.

As the girls rotated through the blood pressure, pulse and respiration, and thermometer stations, Calvin senior Elise Veurink said that working with PREKNOP as a nursing major and organizing parts of the HEALTH Camp had been inspiring.

“The HEALTH Camp is important because these girls are the future of these neighborhoods, and it’s empowering for them to understand how their bodies work and how to keep themselves healthy,” said Veurink.

Once all three groups learned how to take vital signs, each girl got to put her skills to the test in Calvin’s Health Services with volunteer clients. Once the girls checked their client’s vital signs, they would report back to Dr. Mauger, who helps Calvin students with mental health issues in Health Services.

Although many girls said it was scary reporting to Dr. Mauger, the experience made some of them more interested in nursing, and, in one girl’s case, even in becoming a surgeon.

Tega Ebeye ’16, a researcher for PREKNOP her four years at Calvin, was inspired to be a camp counselor as she watched her group engage in this educational opportunity.

“Being from Nigeria, where I’m around people who don’t have the opportunity to go to school, it’s wonderful that we’re impacting our local community and not only [focusing on] going to third world countries. It’s wonderful for any girl their age to hear, ‘You can do this too,’” said Ebeye. “The girls told me they had such a good time and learned so much, so I think this camp is really brilliant.”

In addition to learning about various health-related professions, the girls learned about many aspects of health in sessions about reproductive health, exercise, nutrition, chronic disease and more. They were encouraged to be mindful not only of their physical health, but also their mental and spiritual health.

In Ayoola’s reproductive health session, she reminded the girls to respect their bodies, and make sure others respect them as well. She encouraged them to take care of themselves, physically and mentally, sharing with them the words of 3 John 1:2 in a presentation: “Dear friend, I pray that you may enjoy good health and that all may go well with you, even as your soul is getting along well.”

A call to resiliency

At the closing session, dean of intercultural student development Christina Edmondson left the girls with this advice: “You have to decide at some point, ‘I think that could be me—why not?’ Everybody falls down, but resiliency is about getting back up. Being a girl is not an issue of a deficit.”

Barbara Timmermans, dressed in her graduation bonnet, hood and gown, then called each girl by name and handed them their certificates of camp completion.

With more than ten Calvin departments involved in the camp, the interprofessional and interdisciplinary interaction gave the camp extra strength, which Ayoola hopes will continue in the future. Though this year’s HEALTH Camp has come to a close, the plans for next year's camp are already underway, which organizers hope will include research that could be used to inspire those beyond Grand Rapids to reach their community in similar ways.

“We want our scholarship to grow, even beyond our Grand Rapids neighborhoods, to continue to make an impact,” Ayoola said. The Calvin nursing department hopes to eventually write papers, create conferences and assist other communities in building programs like HEALTH Camp.

“We hope the camp brought an increase in knowledge to the girls, but we also hope for change in behavior down the road, that they would actually adopt a culture of health,” Ayoola said. 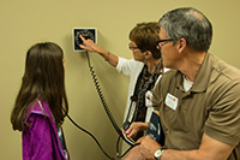 Participants learning in the lab with biology professor Amy Wilstermann. 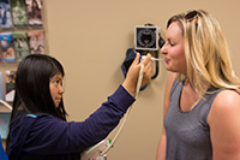