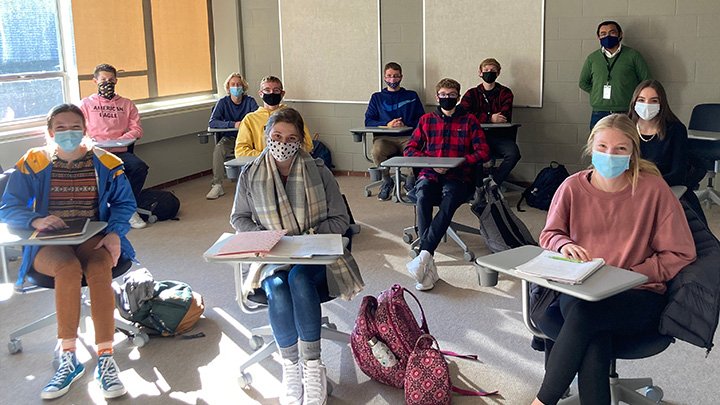 Savoie Bryce, Brady Nichols, and Melissa Scholten have been immersed in the Spanish language their whole lives.

“Elementary school was all Spanish all the time,” said Nichols.

“My parents saw the opportunities it would give me in the future,” said Scholten.

Spanish immersion programs began to gain popularity in the United States around the turn of the century. And Bryce, Nichols, and Scholten, high school juniors at Grandville Calvin Christian, were riding on the front of that wave in west Michigan.

But when they got to high school, the wave they were riding appeared to be nearing its crest.

But how they would do it was made clear over the past few years. Rozema knew it would be difficult to staff a high school immersion program, so she turned to a trusted partner to help navigate a path forward.

“We met with Calvin and said 'Here’s a proposal.' We talked to the Spanish department and they were excited about the opportunity,” said Rozema. “They latched onto it and helped us run with this idea.”

The idea was for Calvin University to help high school students who are fluent in Spanish to build upon their Spanish immersion experience and deepen their understanding of the language. And they’d do this on Calvin’s campus. Better yet, it would allow students to be able to earn a minor in Spanish along with a semester’s worth of college credit before they even graduated from high school.

Calvin University and Grandville Calvin Christian agreed to partner on this endeavor. The first cohort of students were both nervous and excited about the opportunity.

“I was pretty nervous about going and starting a college level class,” said Bryce. “I know that for me it was more how big it seemed to jump from going from high school to college. It seemed big at the time.”

The trio were part of the inaugural cohort of 12 students who started this fall semester in the Spanish immersion program at Calvin. And while it was a big adjustment, it didn’t take long for the group to feel comfortable. A big reason why: Abraham Ceballos. The professor of Spanish at Calvin University has taught in high school and at the college-level for several years, and he has experience with immersion programs, both the curricular needs and the challenges.

‘It was a natural fit for me to be part of this,” said Ceballos. “But there was concern at the beginning [from parents] about whether we were going to be too strict or wouldn’t understand the developmental stage that the kids were at.”

But Ceballos earned the trust of parents as he sought to understand the concerns and address them. “I did several trips to Grandville Christian School, meeting with parents, collaborating with Katy, and answering questions about Calvin.”

“Our students are very well prepared, but until you get there [college] you don’t know what to expect,” said Rozema. “We felt good about what we had done in the 11 years leading up to this. We felt they could do it, and do it well. But there are always kinks to figure out, and this year with COVID we knew we were starting this partnership in the craziest school year. But our students have been great, and the professor’s been awesome.”

The students agree. The transition has been smoother than they’d thought.

“It did seem intimidating as an idea, but once I got into it, it was not nearly as scary as I had it built up in my head,” said Nichols.

“College seemed like a really daunting thing, but having just one class, one college class (this semester) has made it seem more manageable,” said Bryce. “I think what helped was that our professor has been great to explain things really well and has been willing to adjust some things.”

“Having a professor that truly cares about you, always willing to help you, who wants the best for you, learning that eased my mind, gave me peace that going to college will be okay, people at college are there to help you out,” said Scholten.

The mutual respect for the quality of each institution’s educational experiences combined with a set of shared values has led to a strong partnership.

“They (Grandville Calvin Christian) have a strong immersion program, where students learn most or the majority of their content areas in Spanish, and they are bilingual,” said Ceballos. “So, the big picture of this is to make sure all those years of acquiring and learning the language are not wasted, but rather that those experiences, are connected to what we do at the college level. We want to create opportunities for students to see that Spanish becomes part of their identity, and also part of their way of thriving intellectually, academically, and spiritually.”

“We know the integration of faith and learning is done well at Calvin, and our families are paying to go to a school where faith is integrated into all of school life,” said Rozema. “We don’t have a Spanish immersion program so that our students can have a leg up in the business world. Our students are learning a language and a culture in order to interact with people. So, knowing that Calvin would do that as well, knowing that Professor Ceballos in my experience is a great person and he’s going to love on these kids and he cares about them, makes me really excited about this partnership.”

“A lot of our talks are focused on how we can understand different cultures better, how we dive deeper into learning about things we are not a part of. And that’s an important thing in the Christian faith, to reach out to people who aren’t just like you, to engage with cultural backgrounds that aren’t the same as yours,” said Brady.

“Our professor is great at integrating faith and religion into the culture of Latin America and writing on a deeper level of Spanish, which seems like it wouldn’t be easy, but he always ties it together,” said Melissa,” Like we’ll just be talking about something random or a dance and he’ll bring in faith, it’s just great to see the values of going to a Christian high school can continue on into college.”

Getting a head start

And while the students are only one class in, they are already seeing the deep value of this experience.

“Learning Spanish in college as a high school junior is an amazing opportunity, a head start to be able to learn so much,” said Scholten.

“The main thing for me is the depth I’ve gotten, just going deeper into the readings that we’ve done, having substantial conversations with my classmates, being forced to flesh out ideas fully,” said Nichols. “I’ve also gotten more understanding about cultural things.”

“It’s nice to see doing the Spanish immersion Program and all the time we spent learning Spanish can have some benefit to our lives, and it can actually help us go somewhere in the future,” said Bryce.

“I’ve been enjoying the questions they have, the things they say, how they explain things,” said Ceballos. “I’ve seen the students use the different conceptual tools I’ve given them to explain cultural phenomena. It makes me proud to see them use those ideas we talk about in class in their papers and in participation.”

“I feel like this partnership gives opportunities to our students that we couldn’t have offered in our program,” said Rozema.

In addition to the intangible benefits, the Spanish immersion program provides high schoolers with: