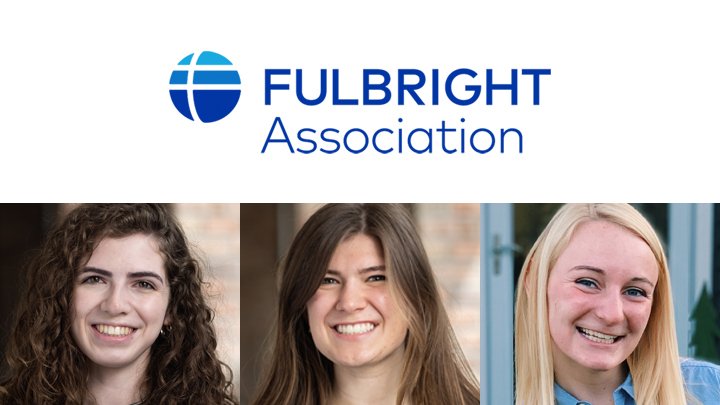 “It will be scary, but I’m excited,” said graduating senior Maggie Backus. “I definitely feel like I have the skills, people, and faith needed to rely on as I take this next step.”

Earlier this month, Backus learned that she received an English Teaching Assistantship through the prestigious Fulbright U.S. Student Program. This highly competitive award was also received by senior Ravyn DeWitt, and senior Juliana Knot was selected as an alternate.

Fulbright reported a record high number of applicants for the U.S. Student Program this year and an 11.9% increase over the previous cycle.

“To be selected as an alternate or a finalist for a Fulbright award is a considerable academic honor,” said Professor Dwight TenHuisen, Calvin’s Fulbright Program Advisor and professor of world languages. “The Fulbright awards are merit-based and incredibly competitive, but more importantly, multiple selection committees all have deemed the student a worthy candidate with an outstanding proposal who is well suited to represent the United States abroad. The fact that three Calvin students were named finalists or alternates from among 11,700+ applicants is a considerable accomplishment.”

Backus, a double major in linguistics and Spanish, will be teaching English abroad in South Korea for a year. She will live in a less populated city in the country with the goal of reaching a more underserved population. DeWitt, a special education K-12, Spanish education K-12, and elementary education major, will be assisting in an elementary English class in the Canary Islands. Knot, a German, mathematics, and philosophy major, is an alternate for teaching English in Germany.

Equipped to Teach English as a Second Language (ESL)

Backus came to Calvin as a freshman with an interest in languages.

“I had been doing Spanish since middle school and I was hoping I could continue with that,” said Backus. “I didn’t even know that linguistics was a field until I looked at what majors Calvin had, and I thought, ‘Oh, you can major in languages in general. That’s so cool!’”

Throughout her time at Calvin, she had several experiences that helped draw her to teaching ESL. As a freshman, Backus participated in a program to teach English in China for a summer. During her sophomore year, she did a semester in Spain and was encouraged to get involved in the community in some way. She connected with a local school and helped teach English in classes there. She also has been able to participate in the ESL tutoring at Woodland CRC that is located across the street from Calvin.

“Those experiences really made me feel like if I got this award, I could do it,” said Backus.

“From my stance, it is impossible not to see how the Fulbright Program resonates so well with Calvin’s mission to equip students to think, act and live as Christ’s agents of renewal in the world and our vision of learning across religious and cultural differences as we seek to promote the welfare of the city and the healing of the world,” said TenHuisen. “These students will be outstanding cultural ambassadors for the U.S. and Calvin, and we are excited for their opportunities.”

A Calling to Teach

With a major in Spanish, one could assume that Backus would be heading to a Spanish speaking country, but the Fulbright program encourages applicants to apply somewhere that they have less familiarity with. The hope is that awardees can learn as much as the people that they are teaching. Backus has taken several Korean classes at Calvin, but she has much more to learn about the language and culture.

“I feel led to teach, and to teach in Korea for a while,” said Backus. “I would call it a calling not only because I feel like it’s been put on my heart as something to try and it is something that I’ve seen hinted at me in different ways in my life, but also because it scares me a little bit. I feel like if it’s really my calling, then it probably will be a little bit scary!”

Backus is grateful for the support that she has received during her time at Calvin and how it has prepared her as she moves forward after graduation.

“I’ve really appreciated the sense of family that is cultivated in my two departments, English and Spanish. It’s something that everyone says, but I feel like it is so true,” said Backus. “Having this network has helped me through class and now it’s helping me take this next step.”