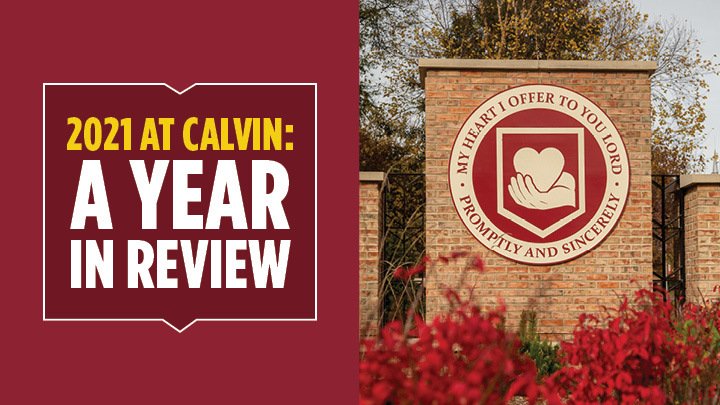 As 2021 draws to a close, News and Stories looks back and highlights ten ways in which Calvin has experienced momentum over the past year. This is not meant to be an all-encompassing list, but rather a small sampling to express how God has demonstrated his faithfulness to the Calvin community yet again over another calendar year!

1. Calvin students became Fulbright and Goldwater scholars, Lilly and Hertz Fellows, and even helped develop a patent for Toyota.

3. The university established the School of Business, hired its first dean, Jim Ludema, and broke ground on a building to support the new school, thanks to an anonymous $22.25 million lead gift—the largest single gift in the history of Calvin.

4. Calvin announced the launching of a School of Health. An anonymous alumni donor provided a transformational $15 million lead gift to establish the school – the second-largest single donation in the institution’s history which funds a signature step on Calvin’s path toward Vision 2030.

5. The National Endowment for the Humanities awarded Calvin University $500,000 in relief funding as part of the American Rescue Plan that was passed by Congress earlier this year. The funding is being used to retain tenure-track faculty in the humanities, freeing up some of their time so they can envision and implement strategic initiatives to re-energize the humanities across campus.

6. Since January 2021, Calvin has launched six graduate programs, and now currently offers 11 graduate programs either online or in-person with more launching in fall 2022. In 2021-2022, Calvin’s incoming graduate-level enrollment was up 50% year-on-year. It’s first-year undergraduate enrollment also ticked up 15% from 2020.

7. Calvin celebrated the Class of 2020 and Class of 2021 graduations. It was a festive doubleheader held at LMCU Ballpark on a beautiful and warm late May day. It was an historical day for a number of reasons. It marked the 100th ceremony where bachelor’s degrees were conferred in the institution’s history, the first conferring of bachelor’s degrees to inmates in the state of Michigan, and the first ceremony where Ready for Life certificates were conferred.

9. Calvin celebrated Cheryl Brandsen’s tenure as provost since 2014, and selected Noah Toly as her successor. Toly came to Calvin from Wheaton College where he served as executive director of the Center for Urban Engagement, chair of urban studies, and professor of urban studies and politics & international relations.

10. The Calvin University presidential search committee launched an international search for Calvin’s 11th president. Michael Le Roy served Calvin faithfully since 2012, citing a desire to be closer to family on the west coast as the reason for not renewing his contract beyond the 2021-2022 academic year.