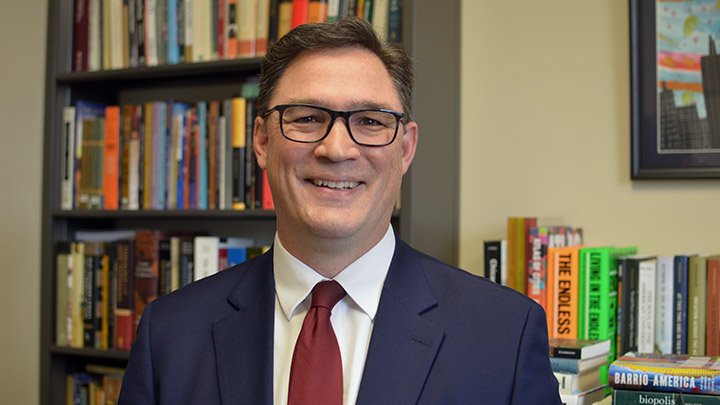 Calvin University’s provost search committee has recommended Noah Toly as the university’s next provost. Toly currently serves at Wheaton College as executive director of the Center for Urban Engagement, chair of urban studies, and professor of urban studies and politics & international relations.

Calvin conducted a national search for the provost position, and Toly’s name rose to the top of a highly qualified and diverse pool of candidates. President Michael Le Roy and professor of chemistry and biochemistry Kumar Sinniah co-chaired the 13-member search committee which included representatives from the university’s faculty and administration.

“We are delighted to welcome Noah to Calvin. He is an accomplished academic, a deeply committed Christian, and is enthusiastic about the Calvin community and the Reformed faith,” said Le Roy, who appointed Toly following the search committee’s recommendation. “His teaching, scholarship, and community engagement represent his commitment to seeking understanding and promoting the flourishing of all people, which is what we are aspiring to as well at Calvin—to be a trusted partner.”

Toly has spent much of his time in academia at Wheaton College. It’s where his journey started as an undergraduate studying interdisciplinary studies and Spanish, and where he later returned to teach after earning a masters and doctorate from the University of Delaware in urban affairs and public policy. With almost two decades spent at Wheaton, the past 15 as a professor, he knew it would be hard for him to leave.

But, in recent years, Toly, an accomplished academic and public intellectual, started to get calls—people asking him to consider positions at other institutions. With this becoming a more frequent thing, a confidant of Toly’s suggested that he make a short list of specific positions at specific institutions he’d be willing to leave Wheaton for.

“I made a very, very short list,” said Toly.

“I have always admired Calvin,” said Toly. “It is a university that has made room for a flourishing of life and mind across the disciplines. It is known for deep commitments to excellent teaching, outstanding scholarship, and fidelity to Reformed Christianity.”

These were things that stood out to Toly from a distance. But Toly’s proximity to Calvin and its faculty over the past decade would tighten. He spent a couple of weeks one summer at Calvin for a Seminars in Christian Scholarship conference, co-keynoted another conference, co-taught classes at the Au Sable Institute, and is currently a co-principal investigator on a Council for Christian Colleges and Universities grant, all alongside Calvin faculty members.

“I’ve had a lot of collaborators and friends at Calvin over the years. Through them, I’ve had the privilege of learning not only about their work but about the good work underway across the university,” said Toly.

And the closer Toly got, the more attracted he became to Calvin’s mission and its values.

“Calvin’s entire mission statement is a beautiful articulation not only of what Christian educators should be doing, but what we should aspire to as Christians, what the church should aspire to,” said Toly. “And, especially that last part of the mission statement: ‘live wholeheartedly as Christ’s agents of renewal in the world.’ It seems appropriately ambitious, and I think it requires faith, and hope, and love—we need all three of the theological virtues to do this work. Faith in God who works through creation and redemption, hope in his transformative work of new creation, and love for God and for our neighbors are all required if we are to live as Christ’s agents of renewal in the world.”

And equally as attractive to Toly is Calvin University’s vision, which includes aspiring to become a trusted partner—to come alongside groups of all different Christian traditions, all over the world and ask how Calvin can best partner with them to promote flourishing. Aiming to become known as a trusted partner is something Toly has demonstrated a commitment to for years.

“Some institutions can become turned in on themselves and exist for their own sake,” said Toly, “but Calvin seems to be a place that knows it exists for the church and world.”

Toly points to the work happening through the Calvin Prison Initiative as one tangible example of that vision being lived out and says he’s been watching that program closely at a distance for the past couple of years.

And as this vision is realized at Calvin, the search committee saw no better person to lead this effort than Toly, who has been living out the central tenets of Calvin’s vision during his time at Wheaton, perhaps most clearly demonstrated through his leadership in relocating the Wheaton in Chicago program to the southside neighborhood of Woodlawn, where the program has connected with community organizations and churches, developing new practices of community engagement that help students, faculty, and staff to learn from local partners.

“Our center, community partners, and others at Wheaton were aligned in the hope that the move would help the college to learn and grow when it came to diversity, inclusion, justice, and unity. We prayed that God would teach us through the move, and he has been teaching us,” said Toly. “We moved to a neighborhood where the fresh wounds and old scars of racial injustice were as poignant and salient as they are anywhere in the country, and that has required us to learn new modes of community engagement. We’ve had to adjust the pace of our work to match our community partners—moving from ‘decide slowly, commit late, implement quickly’ to ‘decide quickly, commit early, and implement slowly.’ We had to become more aware of our blind spots.”

One of the tangible outcomes of this work was the launching of an initiative that brought first-generation students from Woodlawn and select adjacent neighborhoods into the Wheaton in Chicago curriculum and offering co-curricular experiences for credit at no cost.

“I’ve had many opportunities to contribute to the work of diversity, equity, and inclusion at the college level, but my work in the Center for Urban Engagement and Urban Studies program has required consistent focus on these issues,” said Toly. “Semester-in, semester-out, week-in, week-out—with students, colleagues, our advisory board, and partners—it has required steady, long-term focus. I’ve still got a lot to learn—this is not an issue where you “arrive” and you’re done growing—but I’m grateful for the many opportunities I’ve had to learn and grow in these areas already. It is some of the most difficult work we have to do, and at the same time, some of the most rewarding and important work that we do.”

For the search committee, they saw that Toly’s teaching, scholarship, and community engagement demonstrated a commitment to values that are important to Calvin as it pursues its mission and vision.

“Noah’s breadth of experiences and vision aligns well with Calvin’s pursuit of its goal to be a leading global institution of Christian higher ed and to provide resources and walk alongside people from different Christian and cultural traditions,” said Sinniah, who co-chaired the search committee.

A commitment and appreciation for Reformed theology

Sinniah also says the search committee saw in Toly someone who is deeply committed to the Reformed faith.

“Noah recognizes that central to Calvin’s vision is its commitments to Reformed Christianity. He frames the pursuit of all program innovations, educational experiences, and community involvements through a reformed Christian lens,” said Sinniah. “He will bring fresh insights and new energy to these pursuits.”

Toly, who has spent more than two decades in confessionally Reformed churches says that his commitment to and appreciation for Reformed theology was a key attractional pull for him to this position.

Looking back with gratitude

Toly will begin his tenure as provost on July 1 and be formally installed as provost during the Fall Convocation ceremony in late August. He steps into the role Cheryl Brandsen is retiring from after faithfully serving as provost since 2014.

“Those of us who serve in administrative leadership roles at Calvin respond to God’s call for a season. We entrust our work to God and have faith that God will provide the next leader to carry the mission forward,” said Le Roy. “Outgoing provost Cheryl Brandsen has served Calvin faithfully and commendably with the deep commitment to Calvin’s mission. We are grateful for her service and for her commitment to helping Noah to make a seamless transition into this leadership role at Calvin.”

Toly says he’s heard many great things about Brandsen and her leadership, including her commitment to fostering a community of high trust. For Toly, he aims to continue in this good work, and hopes that he’ll be “known for gentle and faithful leadership, and for empowering others on campus.”