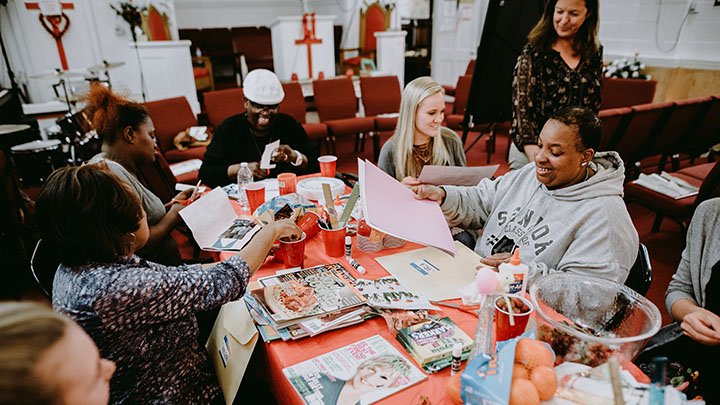 Women Supporting Women is one of the groups formed out of the Public Health Initiative.

In 2015, two nursing department faculty were awarded four years of funding from the Office of the Provost. Their work was one of the three major research initiatives launched by the college at that time.

“The provost's office wanted to support some initiatives where faculty got together around specific topics. One of the ones that the nursing department approached the provost's office with is the issue of public health,” said Gail Zandee, nursing professor and co-director of the Public Health Initiative.

Calvin's Public Health Initiative seeks to create a model for research that promotes population health, health equity, and social change. The focus of this initiative is public health and the goals are to offer faculty development seminars, support multidisciplinary public health research projects in the local community and abroad, and develop inter-professional and interdisciplinary collaborative opportunities for faculty and learning experiences for students.

While the Public Health Initiative is concluding its fourth year, the project truly began back in 2002. “When nursing professors were creating a new curriculum for nursing students years ago, they wanted to form partnerships with local communities in need that faculty and students could go back to year after year,” said Zandee. “Over the years, we have formed partnerships with four urban neighborhoods: Baxter/Madison, Creston/Belknap, Burton Heights, and Heartside.”

Calvin researchers have implemented a sophisticated approach using assessment and data analysis to translate their research into real social change. The scope of the project is broad and interdisciplinary, from scientific research of populations to the production of peer-reviewed articles, theological works, and the visual arts.

“Our goal for the Public Health Initiative has not only been to support neighborhoods and promote public health, but to do more interdisciplinary education and collaboration—going across departments and working together on public health issues,” said Zandee.

In the past four years, the Public Health Initiative has collaborated with a number of departments supporting projects such as: The Fall Prevention program, local church congregational survey, H.E.A.L.T.H. Camp, Women Supporting Women, Rare Disease Symposium, and more.

In addition, the initiative has hired 20 different students to work with faculty as research assistants over the years. Erica Heetderks, senior nursing student, works as a research assistant for Women Supporting Women—a position funded by the Public Health Initiative.

“I am passionate about supporting women’s health related to women in poverty,” said Heetderks. “We see high levels of anxiety and depression, and these mental illnesses hold women back from being able to live joyful life.” Heetderks said she loves offering support groups for mental illness because it empowers women. She feels that providing individuals with tools to properly cope with anxiety and depression enables them to live a fuller life.

The Public Health Initiative also began supporting the neighborhood community assessment work that was already in progress at Calvin. The data that is collected during these assessments is presented back to residents of the neighborhoods in order to identify strategic solutions to problems the residents feel are a priority. “This process is not about us coming in and deciding what the top health concerns are, but coming in to listen to what is needed,” said Zandee. “Residents know what will work in their neighborhoods.”

“My biggest takeaway from my work as a research assistant is the importance of listening to the communities around you instead of stepping in and trying to help in the way you think will be best,” said Heetderks. “We call this community based participatory research. I think this is a good model for research, but also for learning [how] to live in community in general.”

“I’m grateful that [the] Calvin administration and the provost's office had a vision for this four years ago, because there has been a lot of incredible research that has happened, educational experiences that have come out of it, research opportunities, and more connections [made]—both within Calvin and outside Calvin.”

Zandee said she and her team have ideas about the next steps for the Public Health Initiative and look forward to continuing their collaborations and partnerships in the coming years.