Calvin College graduates the Class of 2018 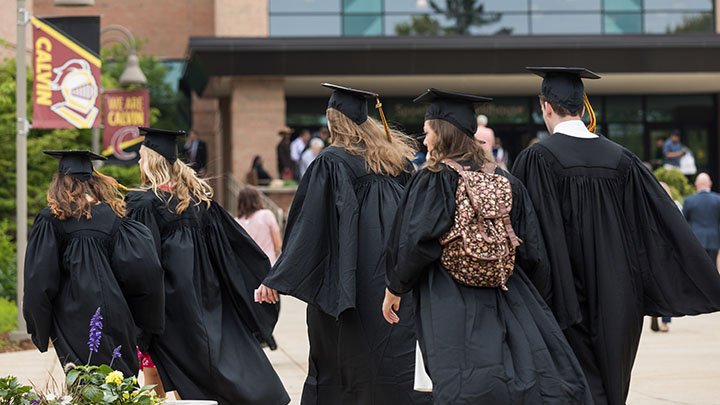 On Saturday, May 19, 2018, nearly 900 students will participate in Calvin College’s 98th Commencement ceremony, held at 2 p.m. in the Van Noord arena. The graduates represent more than 60 majors within the arts and humanities, social and natural sciences, and professional programs. The Commencement address will be given by John Ortberg, best-selling author and senior pastor of Menlo Church in the San Francisco Bay Area.

Established in 1876, Calvin operated first as a prep school and then as a junior college before conferring its first four-year degrees in the 1920-1921 academic year.

Today, Calvin is one of the largest Christian colleges in North America and is internationally recognized as a center for faith-anchored liberal arts teaching and scholarship where students are challenged to think deeply, act justly, and live wholeheartedly as Christ’s agents of renewal in the world. The college’s 2017-2018 enrollment of 3,840 students represented nearly every U.S. state, many Canadian provinces and 60 other countries around the globe.

Calvin’s high-quality education is consistently praised in prestigious rankings guides, including, in 2017-2018, receiving the #1 ranking in the Regional Colleges Midwest category in U.S. News & World Report’s Best Colleges Guidebook. The college was also included in places like Princeton Review’s The Best 382 Colleges, the Fiske Guide to Colleges and America’s Top Colleges published by Forbes, to name a few.

Calvin graduates have high placement rates to graduate schools, medical schools and law schools. In a survey of 2017 grads, 99 percent of respondents reported having either secured a job or begun graduate school within nine months of graduation.

And this year’s class appears to be headed in the same direction, with students heading around the corner and across the globe to pursue career opportunities—everything from teaching art to high schoolers in Jakarta, Indonesia, to doing analysis for investment banking in Salt Lake City, Utah, to working for Homeland Security in El Paso, Texas. And students are attending top graduate schools—studying urban and regional planning at the University of Michigan, pursuing a Masters of Divinity at Princeton Theological Seminary, and entering medical school at the University of Pittsburgh, to name a few.

During 2017-2018, students studied on the beautiful 400-acre campus (located just a few miles from vibrant downtown Grand Rapids) and also on six different continents and in more than 30 different countries, exploring everything from justice studies in Honduras to business and engineering in China, to Christianity in West Africa. The most recent Open Doors Report, which is published by the Institute of International Education, ranks Calvin College third among all baccalaureate institutions for the total number of students who participate in a study abroad experience.

Some of the highlights from 2017-2018 include: the college advancing its commitment to sustainability with President Michael Le Roy signing Second Nature’s Presidents’ Climate Commitment, launching the innovative career-readiness program Calvin LifeWork, Calvin College announcing it will become Calvin University by 2020, and the athletics program earning its fourth-straight Commissioner’s Cup—an award given to the league’s top athletics program based on its cumulative performance in all of the league’s sports for men and women.