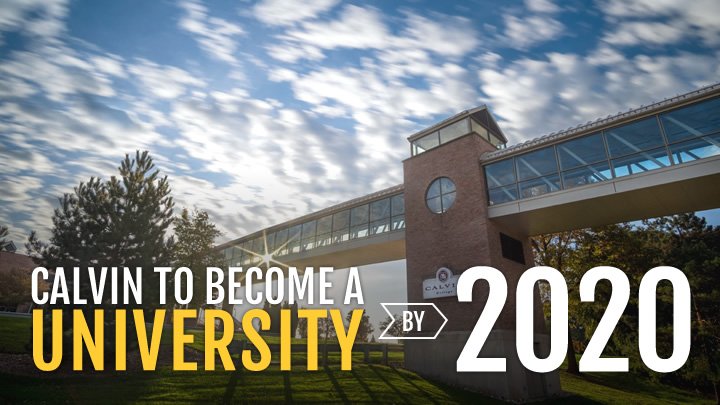 GRAND RAPIDS, Michigan—On Thursday, May 3, Calvin College’s board of trustees unanimously approved Calvin College becoming Calvin University. The move is part of Vision 2030, a statement which provides vision for the college as it fulfills its mission over the next decade.

The shift to university, which was approved during the board’s spring meeting, will happen in 2020 during the 100th-anniversary year of Calvin becoming a four-year college. The board’s decision follows the unanimous endorsement of the college’s faculty senate in late April, marking the culmination of more than nine months of collaborative strategic work taken on by the Calvin community.

“This direction enables us to live into what has already been true about Calvin, and it will better position us for the innovative work that is necessary for the future,” said Michael Le Roy, president of Calvin College. “We see this move providing a great opportunity to introduce more people to Calvin’s distinctive Christian mission.”

Le Roy says the rationale for Calvin becoming a university is strong, including Calvin’s strength, breadth, and depth of its academic programs; new opportunities for academic innovation; and the college’s increasing influence with students and higher education partners around the globe. The college also has a large international student population for whom “university” is more visible and better understood than “college.”

Calvin leaders also see the university structure combined with increased collaboration as creating a more prominent platform for the institution to express its mission through opportunities and innovation within and across disciplines, professional programs, and centers and institutes.

“A move to a university with a liberal arts foundation both names what we already do and liberates us to do that work better,” said Kevin den Dulk, political science professor at Calvin College and executive director of the Henry Institute. “I’m especially enthusiastic about using the university structure to expand our global reach, which is already considerable yet has a lot of room to grow.”

About Calvin College
Founded in 1876, Calvin College is a top-ranked, liberal arts college located in Grand Rapids, Michigan, that equips its more than 3,800 students from 45 U.S. states, 60 countries and five Canadian provinces to think deeply, to act justly, and to live wholeheartedly as Christ’s agents of renewal in the world. Calvin is proud to offer 100+ majors and programs, including graduate-level offerings in accounting, education, and speech pathology and audiology. Calvin students engage in intensive internships, community-based service learning, and significant research that results in publishing and presenting alongside world-class faculty. Discover more at www.calvin.edu