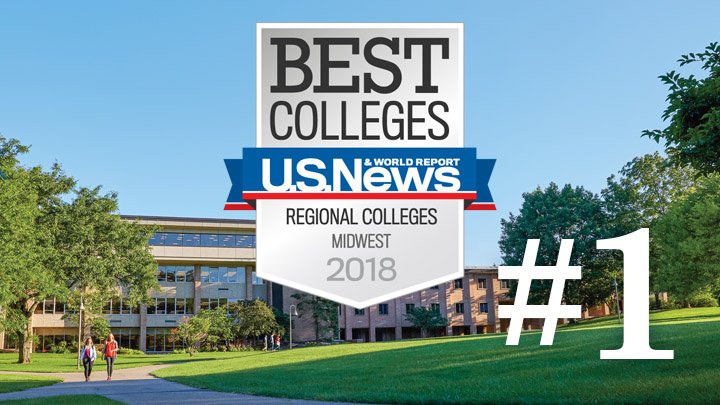 Released online today, the report helps prospective students and their families evaluate colleges and universities based on up to 15 widely accepted indicators of excellence, such as first-year retention rates, graduation rates and the strength of faculty. The report also takes into account qualitative assessments by administrators at peer institutions. See full rankings.

In addition to its #1 overall ranking, Calvin College is also highlighted on a handful of other lists. The college ranks second among Midwest Regional Colleges in U.S. News' “Strong Commitment to Undergraduate Teaching” category; sixth on “The Best Foreign Student Factor” list for the total percentage (11% in 2016-2017) of international undergrads; 19th among "Best Value Schools"; and is included as one of just 42 bachelor’s-granting, regionally-accredited colleges considered to be a stellar example in the area of undergraduate research and creative projects.

“Calvin’s mission to equip students to think deeply, to act justly and to live wholeheartedly as Christ’s agents of renewal in the world drives our educational vision,” said Michael K. Le Roy, Calvin College president. “It is encouraging when independent sources like U.S. News & World Report recognize the exemplary work of our faculty, staff and students.”

And Calvin’s engineering program received special recognition from U.S. News as one of the best undergraduate engineering programs in the country. The college tied for 44th among schools whose terminal engineering degree is a bachelors or masters. Kettering University was the only institution in Michigan to place higher on the list.

About Calvin College
Founded in 1876, Calvin College is a top-ranked, liberal arts college that equips its more than 3,700 students from 45 U.S. states, 60 countries and five Canadian provinces to think deeply, to act justly and to live wholeheartedly as Christ’s agents of renewal in the world. Calvin is proud to offer 100+ majors and programs, including graduate-level offerings in accounting, education, and speech pathology and audiology. Calvin students engage in intensive internships, community-based service learning, and significant research that results in publishing and presenting alongside world-class faculty.

And the college’s 400-acre campus, located in the vibrant city of Grand Rapids, Michigan, serves as a launching pad for students who, in any given year, participate in 40 faculty-led off-campus programs on six different continents. Discover more at www.calvin.edu

A Strong Commitment to Undergraduate Teaching
#2 among Midwest regional colleges
Colleges and universities on this list were cited most often by college presidents, provosts, and admissions deans who were asked to identify up to 10 schools in their U.S. News ranking category with a strong commitment to undergraduate teaching.

The Foreign Student Factor
#6 among Midwest regional colleges
These colleges reported the highest percentages of international students in the 2016-2017 academic year.

Best Value Schools
#19 among Midwest regional colleges
Takes into account a school's academic quality and the 2016-2017 net cost of attendance for a student who received the average level of need-based financial aid.

Undergraduate Research/Creative projects
Included on a list of 42 colleges and universities
College presidents, chief academic officers and deans nominated stellar examples of schools where independently or in small teams, with mentorship by a faculty member, students do intensive and self-directed research or creative work that results in an original scholarly paper or product that can be formally presented on or off campus.

Best Engineering Programs
44th among institutions whose terminal degree is a bachelors or masters
Engineering programs accredited by ABET are ranked based on surveys of engineering deans and senior faculty at accredited programs.