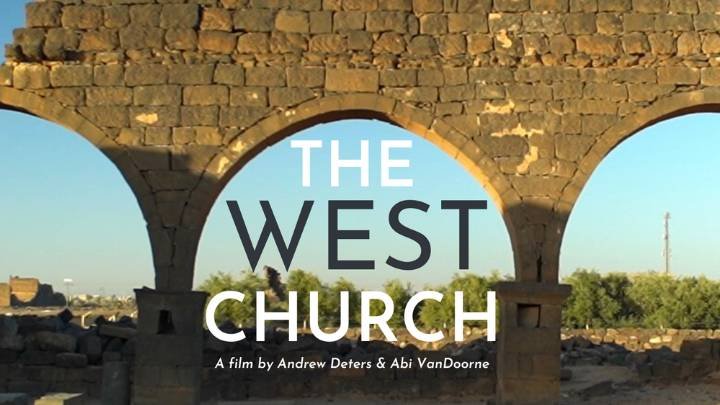 The Jordan flag flies at half-staff, seen closely, then at a distance flying above a city filled with buildings.

A car drives through a busy city, past new rural construction projects, then out to ruins seen through barbed-wire fencing.

“I almost cried,” said Abi Van Doorne, a senior film and media production major from Gig Harbor, Wash., as she watched the documentary she co-directed play out in front of a packed recital hall on Calvin’s campus.

“My heart was bah-boom, bah-boom, jumping out of my chest,” said fellow co-director Andrew Deters, a senior communication and film and media production major from Hudsonville, Mich. “I don’t want to say this documentary is the pinnacle of my Calvin education, there’s a lot of amazing things I’ve accomplished too. But if I can point to something I’m proudest of that I’ve created, it might be this.”

Van Doorne and Deters’ 12-minute documentary titled “The West Church” was their final project for their film and media production class. It was played out at the annual Media Showcase in December 2022.

The project started with an email from Darrell Rohl, assistant professor of history and director of Calvin's archaeology program, to Sam Smartt, associate professor and director of the master of arts in media and strategic communication. Rohl was requesting someone to capture more promotional photos and video footage of the site during his three-week summer course in Jordan as 2022 marked the 50th anniversary of Calvin’s archaeological work in Umm al-Jimal—a project started by the late emeritus professor Bert DeVries in 1972.

When Van Doorne and Deters, both of whom had some previous interest in archaeology, heard of the request, it piqued their interest.

“As we talked about it, we knew we’d be in a documentary class the following fall, so we knew it could be a project we could use for that,” recalls Deters. “We saw the opportunity.”

More than a final project

The two would venture to Jordan with a camera and tripod. A month later, they would return with far more than just hours of footage to sort through.

“I got to participate in the dig, we had one camera and Andrew was behind it most of the time, so I got to be part of the experience,” said Van Doorne. “It was really cool to become engrained in the local community and work on this mutual project together. This project that has been shared through Umm al-Jimal people and Calvin people for 50 years now.”

For Van Doorne and Deters, a goal of their documentary was to generate awareness of Umm al- Jimal and the work happening there. Yes, Calvin has played a role in this work, but the story they discovered is the partnership between the university, its professors, the local community in Umm al-Jimal, and the Department of Antiquities of Jordan.

“We want people to be proud of what Calvin has done there, but also to recognize to the extent the story of Umm al-Jimal is ours to share, it’s not necessarily our story to tell,” said Deters. “There’s an interesting tension that exists there. We should be really proud and happy about what’s going on there, but when it comes down to it, it is their site. If anyone continues to preserve and protect it, it’s going to be them.”

Sharing a story of partnership

“All history is shared history. It is the history of these people in this place,” said Van Doorne.

“I think the people, they are so proud now of Umm al-Jimal. I mean, the local community. And even the people who live around Umm al-Jimal. They are so proud of what we did in the site and what we are going to do,” said Muaffaq Hazza in the documentary, who remembers exploring the ruins as a young kid and now decades later is co-director of the Umm al-Jimal Archaeological Project.

The many partners on the Umm al-Jimal project are working to get the site added to UNESCO’s World Heritage List, which lists the most important sites of cultural significance around the world. For many years, the site has been on UNESCO’s tentative list. Van Doorne and Deters are hoping their documentary will only help the site continue its push to gain UNESCO status. The formal and final nomination documents for World Heritage List status will be submitted to UNESCO by the end of this month.

“With UNESCO World Heritage status, Umm al-Jimal will immediately be recognized as one of those sites that tourists ought to visit,” said Rohl in the documentary.

So, as the credits rolled during the Media Showcase in December, Van Doorne and Deters reflected on the significance of their project and their experience.

“When I saw the photo of Bert De Vries at the end and the credits are rolling, wow … that was a lot,” said Deters. “All at once I was feeling a lot of the emotions that I had over the whole experience.”