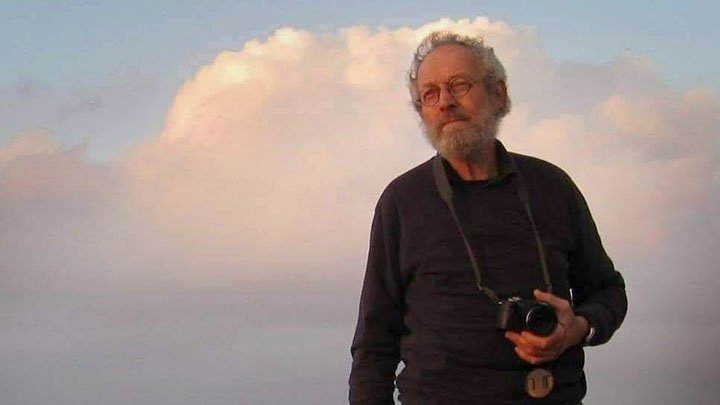 While archaeology and more specifically the Umm el-Jimal Archaeological Project (UJAP) were the focus of the majority of history emeritus Bert de Vries’ career at Calvin, his real passion was the Jordanian people. So much so that de Vries’ career-long project became known as an admirable example of “community archaeology,’ a resource by the people and for the people, long before such practice was valued.

“My principle from the beginning was to include the local people,” said de Vries, in a recent interview about his work. “I always felt like they should be considered part of the team. We usually hired 20-30 local people, and I’ve always felt that they should understand what they are doing and why.”

De Vries, who graduated from Calvin in 1960 and would go on to teach at his alma mater for more than 50 years, died suddenly on March 28. He was 82.

Because de Vries majored in engineering at Calvin and Near Eastern languages and literature at Brandeis University, where he earned his PhD, he was invited to join an archaeological expedition in 1968 as a mapper.

“I figured it out as I went along,” said de Vries, in a 2013 interview, “and I really liked it.” On that trip, an excursion to Umm el-Jimal piqued his interest.

“Nobody was doing anything there at that time,” he said. “Nobody knew what to do with it.”

De Vries was awarded a grant to map the site in 1972, and this would begin his nearly 50-year focus of bringing little-known ruins inhabited by Bedouin to a potential UNESCO World Heritage Monument, aided by hundreds of Calvin students and native people along the way.

Now a museum with artifacts and historical information about the site, an accessible walking tour with interpretive signs, and trained local guides all add value to the site. For his commitment, de Vries was recently bestowed the King Abdullah Medal of Excellence, Jordan's highest civilian honor.

“On a global scale, Bert’s work at Umm el-Jimal is widely recognized within archaeology, cultural heritage, and humanitarian circles,” said Calvin colleague Darrell Rohl. “I have known no one who more closely epitomizes Micah 6:8 in their doing of justice, loving of kindness, and humble walk with God … than Bert de Vries.”

And his enthusiastic zeal for his project and his people infused his teaching.

“Bert was remarkable at seeing the potential in students and colleagues, invested himself in them, and worked with them to find ways they could succeed,” said history department colleague Doug Howard. “He did not give up on people but helped them figure things out and find a way to contribute to the larger project.”

He was bestowed  the Presidential Award for Exemplary Teaching, the highest honor that can be awarded a Calvin professor, in 1998.

“Bert was an extremely rare academic,” said Howard, “a world-class scholar, a gifted manager and administrator, and a people person all in one. Most of us work hard to try to do one of those competently.”

Champion for the voiceless

Students both in his classroom and those that accompanied him on digs were deeply affected by his compassion.

“When I was a student and working at Umm el-Jimal, I remember being surprised (and a little confused, at first) by how much passion he put into his interaction with the local community,” said Andy Rau ‘97.  “It seemed strange to me at the time that his work with the local Jordanian villagers (and later, refugees in the area) was just as important to him as his archaeology work. In time, I realized that for Bert, the whole point of his scholarship was to serve other people, especially the voiceless and powerless.

De Vries’ involvement in UJAP would lead him to become an advocate and ambassador of Middle Eastern culture—prescribing peace, understanding, and compassion.

In 2009, concerned about refugee children, Bert and his wife, Sally, helped found Healing Children of Conflict in west Michigan, an organization that works to bring injured children to the U.S. for treatment.

“Bert has been the embodiment of Calvin’s audacious mission and proof positive that this mission can be realized,” said Rohl. “His legacy will live on in Calvin’s archaeology program, the Umm el-Jimal Project, and through students who learn to live as passionately as he did.”

Added colleague Will Katerberg: “The people in the community who worked with him were his family. They, and their essential role in the work at Umm el-Jimal, are his truest legacy in Jordan.

“For Calvin, I think his greatest legacy lies in this aspect of Bert’s work and life: integration of faith, work, and life is not just about ideas but about how following God’s calling for us leads us to love our neighbors.”

A memorial service for colleagues, close friends, and relatives will be held at 2 p.m. on Friday, April 2, at Calvin Christian Reformed Church in Grand Rapids. The service may also be viewed via livestream at  https://www.youtube.com/channel/UCCblmHBbe8AIzEyQxUM1VjA