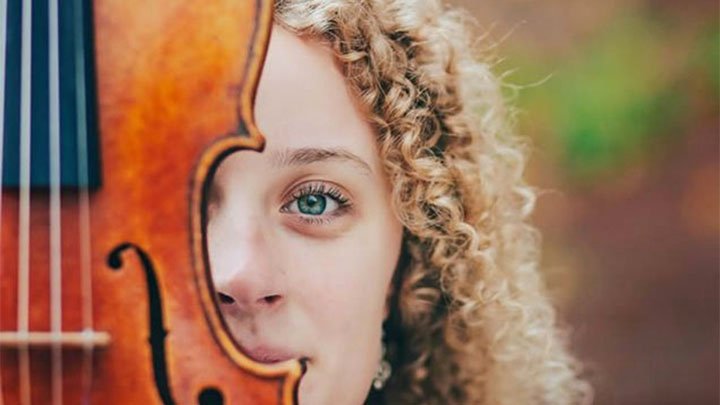 In fall 2018, Sarah Griffioen performed her required senior violin recital. Griffioen, a musical performance and computer science double major, said in preparing she spent months practicing on her own as well as under the private instruction of Calvin music professors.

A campus in harmony

“Calvin has a long tradition of inviting the musical contributions of both majors and non-majors in just about every aspect of our department,” said Benita Wolters-Fredlund, co-chair of the music department. “Unlike some schools where certain ensembles or positions are reserved for music majors, at Calvin everyone is welcome to participate in all aspects of the program.”

While there are approximately 80 music majors and minors, more than 400 students participate in ensembles or private lessons, explained Wolters-Fredlund. “When you add to this all the students participating in the Calvin Theater Company, Rangeela, Chapel, and student orgs like Improv, Dance Guild, Annex Voices, uKnighted, Knightingals, and the Visual Arts Guild, you start to get a picture of how passionate Calvin students, of all majors and minors, are about the arts.”

“Music majors with a concentration in performance are required to give both a half and full recital, and the reason is simple: nothing prepares you better for performing than performing,” said Wolters-Fredlund.

It typically requires months of preparation practicing every day, explained Griffioen. “Not only does this process sharpen a student’s technique and musicality but they learn very practical lessons about how to memorize huge chunks of music, how to schedule a rehearsal, and how to write program notes. For all these reasons, recitals are always very meaningful personal accomplishments for those who pursue them.”

All students giving a concert are required to have a private lesson instructor who helps them choose and perfect pieces that suit their abilities. “Usually we play pieces from a variety of time periods. Not only does playing different eras show off the ability of the students, it is more fun for them,” explained Griffioen.

“The amount of individual attention you get far outweighs what you can get in a group setting. Every time you come into a lesson with that teacher, they are solely focused on you,” she said. “They are going to remember your strengths and weaknesses and cater to you personally.”

Griffioen played both romantic and baroque pieces during her recital this fall. “I knew I loved romantic music and romantic concertos,” she said. “I knew I wanted to play a piece in my concert.” Students often let their instructors know which type of pieces they would like to play, and the instructor will provide them with several options. “The instructor’s knowledge about the repertoire for the instrument is usually much greater than my own,” said Griffioen.

Griffioen played the first movement of this romantic concerto for her half concert in fall 2017, as well as in the concerto competition, which she won. She performed the last two movements of the piece at her concert this fall.

The decision to come to Calvin was an easy one explained Griffioen. “I was looking for a Christian liberal arts school and a good math and science department," said Griffioen. “Those were the areas that I was gifted in and liked, even though I was not quite sure what I wanted to do. Calvin was a great fit because they are super strong in both their math and sciences, and they have a reputation of having a great music department over the years.”