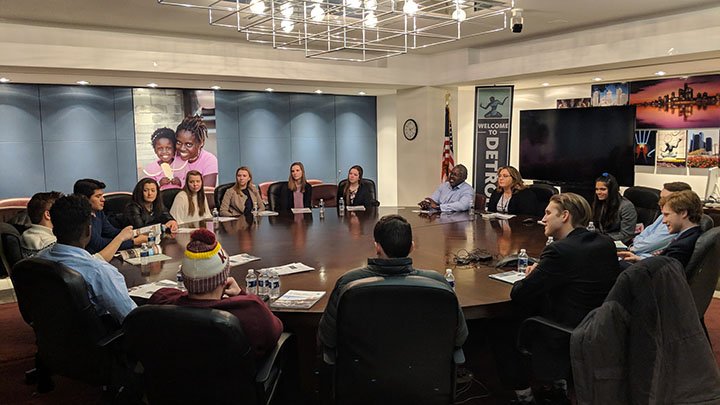 “Cities are vibrant centers where we can celebrate and appreciate the diversity of God’s creation in terms of cuisine, art, entertainment, economic and technological advances, and different cultures,” said Mikael Pelz, political science professor. “However, certain forms of urban renewal take away from this experience by displacing certain residents from their community or offering amenities that are only accessible to one type of group.”

During Interim 2019, Pelz guided students in examining the challenges associated with urban renewal in the City of Detroit. In the course "Detroit and Urban Renewal," students studied the shifts in urban politics toward the latter half of the 20th century, applying literature they were reading to the unfolding story of Detroit.

The final week of their class was spent in Detroit where students met with various decision-makers in the city, toured different neighborhoods, and observed the contradictions of urban renewal for themselves.

Detroit is a city that has experienced the consequences of post-industrialization the hardest, explained Pelz. “Vacant factories, homes, and neighborhoods, structural racism and white flight, lack of economy opportunities and extreme poverty, and poor leadership all characterize this period for Detroit.”

Gradually over the last eight years, Detroit has been making a comeback as people, businesses, and investors see new opportunities and vitality in the city, said Pelz. “Thus, Detroit is a wonderful case study of the first stages of urban renewal and to ponder important questions about redemption, justice, and equality within this process of renewal.”

“As we were studying creation, the fall, and renewal, there was a clear connection to what we were learning about Detroit,” said Bryce Bundens, engineering major. “I think we can all attest that we came out with a better view of Detroit—and a more optimistic view of how the future of some of many midwestern cities looks. Many of my own perceptions were destroyed.”

With a concentration in civil engineering, Bundens explained that the topic of urban politics and renewal piqued his interest. “I think it’s quite a travesty that more people who are involved in designing the environments in which we live are not aware of this,” he said. “The planning of highways, neighborhoods, and public spaces really does influence the way we think about people—if you cannot see someone, how can you share their story?”

“In meeting with various stakeholders in Detroit, I want students to first be inspired vocationally,” said Pelz. “I want students to realize that a successful city requires the contributions of various actors and institutions. The business sector, government leaders, churches, and community liaisons all have important roles to play in decision-making.”

“My highlight of the trip was meeting with the Mayor’s office and the Department of Neighborhoods,” said Stephanie Wynia, an international development and business major. “These meetings I found especially informative because they could speak to specific project successes that are improving the city.”

“Visiting gave me hope, that despite the fall, God is bringing redemption. And if the church is active in the process, city growth can benefit the wealthy and marginalized alike,” said Wynia.

“Clearly Detroit is a fallen city—and maybe all cities are fallen—but I would like to see renewal of God’s kingdom right there in Detroit,” said Bundens. “That’s why I think it is widely important to study urban renewal, because I do not want to be in the dark about what is going on.”

“I believe it is up to Christians to work toward a city that is inclusive and takes into consideration people from all walks of life when making important collective decisions,” said Pelz. “Gentrification will continue to occur in cities, but Christians and other actors can work to manage the negative effects of this process by promoting affordable housing, expanding opportunity, and embracing authentic and diverse forms of community.”