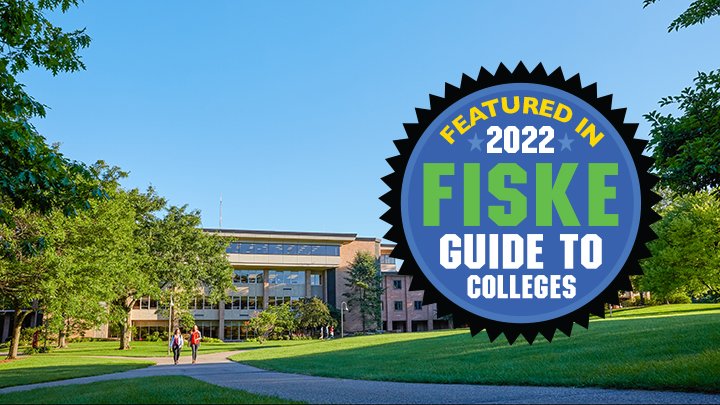 The Fiske Guide to Colleges 2022 edition applauds Calvin University for its affordability and the strength of its engineering program.

Compiled by former New York Times education editor Edward B. Fiske, Fiske Guide to Colleges 2022 is a selective, subjective, and systematic look at 300-plus colleges and universities in the U.S., Canada, and the UK.

In its 38th edition, the guidebook’s editors included Calvin University on its list of colleges and universities with low average debt, joining the University of Michigan as the only other institution in the state to crack the list. Not only do students at Calvin have a lower average debt, they also pay back their loans at an incredible rate. Only 1.6% of Calvin students default on their loans (compared to a national average of 9.7%).

Calvin is also on a short list of inexpensive private colleges and universities. Making Calvin even more affordable is The Calvin Promise. Launched in 2020, the program promises at least $21,000 per year in scholarship and grants for up to four years to admitted students with at least a 3.8 GPA. The university also has one of the most robust Named Scholarship programs, with more than 1,000 named scholarships made available by the generosity of donors.

Fiske also shortlisted Calvin University on its “small colleges and universities strong in engineering” category. Calvin is the only school in Michigan and one of just 16 in the country to make this list. The engineering program is not only highly regarded by academic guidebooks, but also by industry leaders. Students were asked to work on a project for Toyota Motors Company, and this past spring their research efforts over the past few years yielded a patent for one of the largest automotive manufacturers in the world.

For 38 years, the guide has aimed to help prospective students and their families discover the real personality of top colleges and universities based on a broad range of subjects, including student body, academics, social life, financial aid, campus setting, housing, food, and extracurricular activities.

In addition to the guidebook, Fiske Guide to Colleges is also available as an iPad app on iTunes and a web program on CollegeCountdown.com. Fiske Interactive allows families to go beyond the book by viewing photos of each campus, creating school lists, and taking virtual notes.

Edward B. Fiske served for 17 years as education editor of the New York Times, where he realized that college-bound students and their families needed better information on which to base their educational choices. He is also the coauthor of the Fiske Guide to Getting into the Right College and Fiske Real College Essays That Work.

Founded in 1876, Calvin University is a top-ranked liberal arts university that equips its 3,300 students from 46 U.S. states, 66 countries, and four Canadian provinces to think deeply, to act justly, and to live wholeheartedly as Christ’s agents of renewal in the world. Calvin offers 80+ majors and programs, including graduate-level offerings in accounting, business administration, education, exercise science, geographic information science, media and strategic communication, public health, and speech pathology and audiology. Graduate-level programming in data science and public administration will be available starting in fall 2022.

Calvin students engage in intensive internships, community-based service learning, and significant research that results in publishing and presenting alongside world-class faculty. The university’s 400-acre campus is located in the vibrant city of Grand Rapids, Michigan. Discover more at calvin.edu.