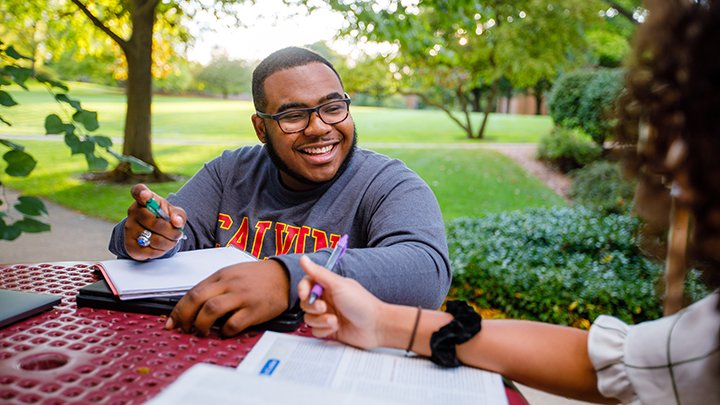 TJ Williams, a junior at Calvin University, is the recipient of three Named Scholarships.

For many high school students, attending the college they want to go to really comes down to the bottom line: how much does it cost? The reality of this answer can lead a high school senior to make a compromise that can significantly shift the course of their life.

So, what if just a 30-minute investment of time could change someone from a feeling of regret to relief, from compromised to confident.

The “it” she’s referring to is a Named Scholarship. In her case, two of them. It only takes about 30-minutes to fill out the application.

“I was going between Calvin and Dordt and these scholarships helped swing it toward Calvin,” said Vander Ploeg.

The first named scholarship was established in 1928, honoring a professor who taught math from 1905-1920 who was killed in a car accident. To remember and honor Professor William Rinck’s love of mathematics, his family and colleagues established a memorial fund in his name that has been providing scholarships to outstanding mathematics majors for 92 years.

Little did the donors know at the time, but the seeds they first planted almost a century ago had multiplied hundreds of times over, blossoming into a beautiful landscape.

“Because we started early and built it up, Calvin is considered a best practice for donor-funded scholarships,” said Jodi Cole, director of development. “We really do have quite an extensive program for the size of institution that Calvin is.”

The program includes 825 named scholarships, and a number of these offer more than one award. In total, 1,200 students are benefiting from 1,400 awards in 2020-2021. The scholarships support students based on everything from academic major to hometown or graduating high school. The average scholarship is $2,500-$3,000, with the largest named scholarship hitting $18,000. These scholarships are completely donor-funded and are in addition to the robust financial aid packages already offered to students.

“We hear time and time again how this scholarship was the deal maker for students, this filled the gap, this $2,500 represents a summer job, so I can do an unpaid internship or I can do an off-campus program,” said Cole about the themes she hears in Thank you letters from students. “This allowed me to choose a Christian education, or I didn’t have to go to a community college first, I could start now. This was my sign from God that this was His direction for my life.”

And some of the scholarships offered through this program are as unique as the students who apply for them, partly due to the fact that a number of the scholarships are created to honor a loved one. And, Cole says, there are some that can get pretty specific.

“For example, there’s a scholarship for a biology major with a first preference given to someone who is a bass fishing tournament participant,” said Cole. “Another one is for someone who has worked on a garbage truck or played the organ.”

Regardless if the scholarship is based on a hobby or an interest, characteristics or demographics, each scholarship has a story and a donor behind it who sees their investment as much more than just financial.

"We hear about donors inviting students over for Sunday dinner and doing coffee dates. One donor sent a weekly devotional to her student recipients as encouragement,” said Cole. “Our students express their appreciation for the relationships that they develop throughout the year.”

“For me, it paved the way for me to stay at Calvin, especially this year,” said Williams, who plans to be an educator somewhere in the world when he graduates. “When someone’s name is attached to something for you, you feel like someone has your back and they believe in you. It motivates me to keep doing better each year I attend Calvin.”

“Knowing that people are out there willing to support me in my musical pursuits helps me work harder in making sure I pursue my gifts,” said Vander Ploeg, who is hoping to be a worship leader in a church someday.

For Vander Ploeg and Williams and so many others, their named scholarships made the bottom line smaller and their decision clearer, and provided them with extra community support and encouragement as they pursue their calling.

“Calvin’s been wonderful, thoroughly enjoyed my time here,” said Williams. “The support that you feel is astounding and amazing. I feel loved on campus, I really do.”

“We have a unique donor base,” said Cole. “So many people care so deeply about this institution and its students.”

Students who are interested in a Named Scholarship, can explore and apply for one or more of the hundreds of options.

The Named Scholarship program awards more than $4 million in scholarships each year.

Note: The Named Scholarship program is in addition to the already robust financial aid packages offered to students. Learn more about financial aid at Calvin, including the $21,000 Calvin Promise.