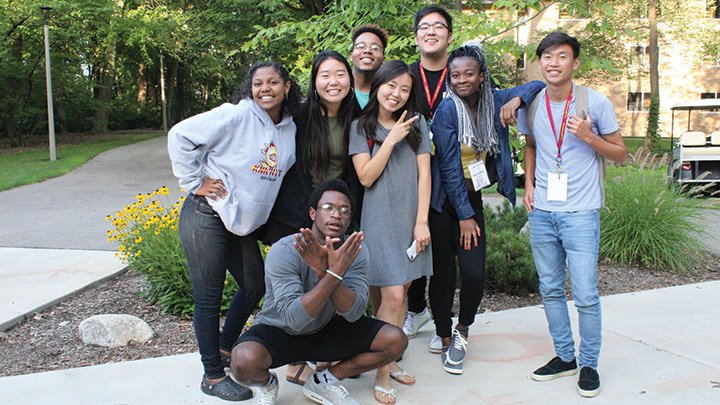 Students pose on Calvin University's campus for a photo during the 2018 Entrada Scholars Program.

It’s an image Rosalba Ramirez uses to describe the feeling some high school juniors and seniors feel when thinking about college.

“I came to the U.S. as an international student, and that was a cultural shock, not knowing a language was intimidating to me, that was a ‘blindfold type of experience.’”

Whether it’s not knowing the language or culture or simply having little to no context of what the college experience is like, one thing is certain: it’s a major barrier.

“That’s why I love this position and why I love being at Calvin, I want to help people that feel overwhelmed by college experiences the same way I felt a long, long time ago,” said Ramirez.

Ramirez and her team are focused on creating programs that foster access, interest, and readiness for postsecondary education. They want to help students, regardless of whether they choose to attend Calvin.

And, this summer, they are expanding their offerings: adding two new programs to help remove barriers for students who want to go to college.

The first, the Career Exploration Program, is open to all high school students. The one-week program provides students who are interested in a specific area of study to experience what majoring in that field would be like.

“Sometimes we choose majors based on what we hear or what we see on TV,” said Ramirez, “but when students come to college and start their classes, they sometimes say, ‘this is not what I thought it would be.’”

So, Ramirez and her team saw a need to help students explore these majors before college, developing a program that help students see the potential careers, participate in hands-on learning experiences, and allow students to visit companies to see what the working environment could look like in a particular field.

“Through this program, we hope to help students save time and money by making decisions ahead of time based on this valuable experience,” said Ramirez.

Another new program is one Ramirez says she would have benefited from greatly: the International Summer Academy.

The academy has two different tracks, a language track and an academic track. The language track is for students, who, like Ramirez when she came to the U.S. for college, need to improve their understanding of the English language before beginning college courses. The academic track is for students who are already at an advanced language level, but who want a first college exposure. Both are residential programs.

The reason the international summer academy was started is in large part because of the success of Calvin’s flagship College Access Program: Entrada.

The two new programs would be wise to take their cues from the successful Entrada Scholars Program, which has lived up to its names’ meaning: “entrance or gateway.” Nearly 9 out every 10 graduates choose to continue on to higher education after going through the program.

The Entrada Scholars Program is an academic achievement program designed to provide AHANA (African American, Hispanic, Asian, Native American) students who are juniors or seniors in high school with the necessary tools for successful college enrollment and completion.

The monthlong residential program provides students with a full college experience, allowing scholars to enroll in a regular college course with college students, earn college credit, and receive skilled advice on how to study in college.

“Having that first exposure before college is extremely valuable,” said Ramirez.

Entrada graduates, to a person, agree.

Dre Davidson, a senior social work and psychology double major at Calvin from Chicago, Illinois, always knew he wanted to go to college, but had a hard time finding a college that his parents could afford.

The financial component made it possible for him to go onto college, but he earned much more from his experience.

“It helped me become familiar with campus, not only where things are but also the resources on campus that are available to students,” said Davidson. “And I built a lot of relationships through Entrada and a lot of my friends from the program are still my friends today. It was great to get to campus and to see familiar faces, I wasn’t starting with an empty slate.”

For Jasmine Slofstra, a senior nursing major from Wyoming, Michigan, the financial aspect of college was the biggest barrier. For her, Entrada provided a path financially as well. But, just like Davidson, it provided so much more.

“The Entrada program really prepared me to successfully step up my college career,” said Slofstra. “I don’t think I would have succeeded my first semester without Entrada.”

Ramirez says that most students who go through the program value their experience so much, they want to pay it forward. Davidson and Slofstra are doing just that. Both served as resident assistants in the Entrada program during the summer after their first year at Calvin.

“I went back because I realized the value of Entrada. There were a select few RA’s who were there for me during and after Entrada, that were a friendly face on campus,” said Slofstra.

“I’ve enjoyed seeing Entrada from the other side,” said Davidson. “I got to meet awesome people and walk with them through this transition period of their life.”

For Davidson, after he graduates he’ll pursue a job in medical social work, but he’s also hoping to be selected as a resident director in Calvin’s Entrada’s program. “The Entrada program has shaped me and my college experience, so I want to continue to give back in any way I can to the program.”

Ramirez can relate. When she came to the United States years ago, she had an ESL professor who was so passionate about what he did, and who inspired Ramirez’s two decades-worth of work in the field of education.

“I was surrounded by good people that supported me in my college years. Without them, I wouldn’t have been successful,” said Ramirez. “I wanted to do the same, to be part of the support system for other students. That’s what I value about Calvin too, the support system that students have when they come here.”

And the students value the friendships they have when they leave.

“My aunt, who was part of the Entrada program back in 1996, will come to Grand Rapids (from Canada) and not visit us, but visit her friends from Entrada,” said Slofstra with a smile. “Some of my greatest friends are from Entrada too.”