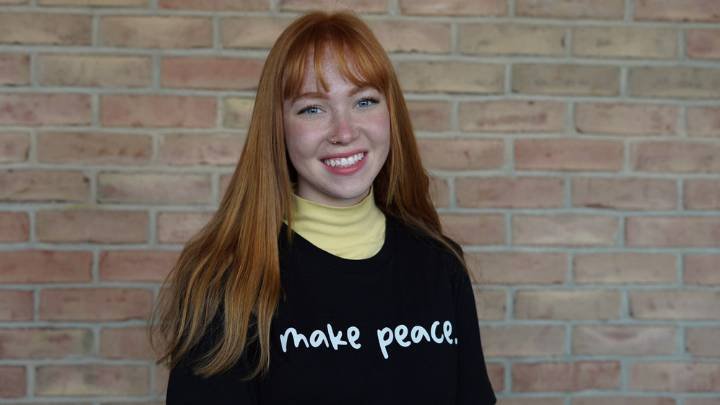 Senior Emily Steen is one of three recipients nationwide to receive The Hatfield Prize in 2023.

When Emily Steen arrived on campus as a first-year student, she says “I was shocked at what I heard.”

Within the first couple of weeks, Nick Nichols, a former inmate who began his studies inside Handlon Correctional Facility in Ionia, Michigan, visited one of her core classes and talked to the class about the Calvin Prison Initiative (CPI) program—now considered a national model for prison education.

“I didn’t know what was happening inside prison until I got to Calvin,” said Steen. “I realized how privileged I was that I didn’t have to know about this before. It completely rocked my world.”

For Steen, the realities of prison were no longer out of sight, out of mind. As a student in the sociology program, she would often have classes that included students who were finishing the degree they started inside Handlon Correctional Facility. She had lots of conversations, developed friendships, and learned of her peers’ struggles. This led her to act.

In her first year, she led the way in starting the Calvin Peacemakers, a student organization aimed at educating the campus community on restorative justice. Through this experience, she was able to engage with community organizers, activists, and state politicians. She also made several visits to the Handlon campus, where the CPI program was started.

What she quickly discovered was the formative impact programs like CPI were having in helping prepare students to be prime citizens. What also became apparent is the real struggles the paroled students faced upon re-entering society.

“I learned about the countless barriers that have been constructed to systemically exclude them from flourishing in their post-incarceration lives,” said Steen. “The shadow of mass incarceration truly looms over them, influencing everything about their lives, from their inability to secure employment to the stigma attached to their very being in neighborhoods in which they struggle to find affordable and safe housing.

Again, this reality that changed lives needed to be met with changed systems led her to further action. She had to do something about this, and so she designed a research project focused on digging deeper into the problem.

Upon the prompting of her mentor and research partner, sociology professor Mark Mulder, Steen decided to apply for the Center for Public Justice’s (CPJ) Hatfield Prize. CPJ is a Christian civic education and public policy research organization based in Alexandria, Virginia.

“When the call for applications came through, I immediately thought of Emily,” said Mulder, who had partnered on research with Steen for the past two years through the Henry Institute for the Study of Christianity and Politics. “Emily’s excellent application combined with CPI being on the leading edge of something that’s really important, as more and more higher ed institutions are doing things that mimic what Calvin has established, made her project appealing.”

Steen’s project was one of just three nationwide to receive the Hatfield Prize, which was established six years ago to honor the late Senator Mark O. Hatfield, a U.S. Senator from Oregon known for integrating his Christian faith and his public policy commitments. The award provides Steen with funding and access to dig deeper in understanding the problem of re-entry and to explore what policies and partnerships could be formed to make it smoother for returning citizens.

The research she is doing in this space is truly groundbreaking.

“Though research has been conducted on educational programs within prison settings, the re-entry of these student parolees is largely a new issue that has yet to be studied,” said Steen. “As the United States (and Michigan more specifically) comes to terms with its unsustainable prison-industrial complex and considers further re-entry strategies, I hope this research will illuminate the necessity of established networks, education, and community in parolees lives post-incarceration.”

While CPI has been lauded by the U.S Department of Education as a model program for prison education, what leaders of that program didn’t anticipate when it was designed was a growing number of their students being paroled. That’s happening more frequently now because of updated legislation that allows for re-sentencing of juvenile lifers. With this new reality, and with a growing number of higher ed institutions beginning programs behind bars because of the expansion of Pell grants for inmates, Steen’s research couldn’t come at a more important time.

“With new opportunities this year to fund higher education for incarcerated individuals through Pell grants, Emily Steen’s research is very timely,” said Emily Fromke, program director of Shared Justice at the Center for Public Justice. “Calvin University’s Prison Initiative provides a good case study for this research at a crucial moment when other higher education institutions are asking similar questions about how to best support incarcerated students and returning citizens as they reintegrate into our communities.”

“De-escalation will cause a greater influx of people returning to society without support structures which will only leave people feeling more out of place,” said Steen. “My hope is that this project will not only provide the Calvin community with a guide for the gaps, identifying where they exist and solutions for how to fill them, but it hopefully will also serve as a guide for any community that is dealing with re-entry and de-incarceration.”

While Steen’s research is groundbreaking and resume-building, her motivation is in no way self-serving. It’s in every way missional.

“This project rounds out my time at Calvin and hopefully gives back to the community that’s given a lot to me,” said Steen. “I love and care about the people in the CPI program and I want the students to be successful.”

Hatfield Prize recipients will spend January to June conducting research and writing, and the reports will be available in September 2023. The Hatfield Prize is made possible through the generous support of the M.J. Murdock Charitable Trust and the Annie E. Casey Foundation.