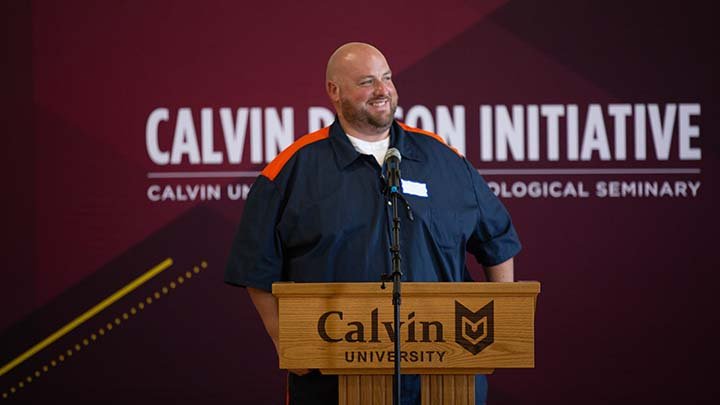 Tim Baker was the student speaker at the 2022 Opening Convocation at Handlon Correctional Facility on September 9.

In the mid 1990s, at six-feet tall and 300 pounds, Tim Baker stood out. But all the young teen wanted to do was fit in. That proved difficult when you add in the fact that he was held back in school so many times that he was able to drive himself to school by the eighth grade.

“Turned out that [getting my license] was more of a curse than a privilege,” said Baker.

Baker had grown up in a strict Christian home. His mom catered weddings, graduations, and funerals and all those events were held at the church hall. “Which meant I spent just about every day in the church. The hall and kitchen she used was at the same Church/Christian School that I attended as a child … I spent more time in the church, than I did at my own house.”

“Once I didn’t rely on my mom for transportation, I began to shy away from the church, and then realized that I have been missing out on a lot of activities,” recalls Baker.

This new freedom combined with a desire to fit in would take him down some dark roads.

“It was around this time in my life that I began to divert from church and God, and I was wanting to upset God, and the best way that I figured I could do that was to go to the complete opposite of what he represented,” recalls Baker.

“I would do anything to fit in,” he said.

Unfortunately for Baker, anything meant anything. He joined the Church of Satan. He started doing drugs like marijuana, which eventually led to harder drugs like heroin and cocaine. These decisions impaired his judgment and would ultimately contribute to him taking a man’s life in a gas station armed robbery at the age of 18.

“I didn’t care about my life, so how was I going to care about another’s life,” recalls Baker of that time.

Baker received a life sentence. His scenery changed; his situation did not.

“For the first three or four years people would describe me as someone trying to fit in, but not quite getting there. For some reason I could never say the right thing, or act the right way, so I was never really liked by the other prisoners.”

Wrestling with his identity

While Baker would stay busy, working jobs in prison since the first year he entered, he still struggled to find his identity or discover meaningful community. And while he was still involved with the Church of Satan, “I still had the knowledge of the Lord and all that he has done for me,” said Baker.

“I was in an internal battle with myself,” said Baker.

It was during this time when Baker witnessed professors from Calvin Theological Seminary and Calvin University starting to regularly come into Handlon Correctional Facility where he was residing. “I was already here [at Handlon] when Calvin came, I was also friends with Troy, who was one of the first people to ask for this program [Calvin Prison Initiative].”

He watched a few cohorts of the Calvin Prison Initiative (CPI)—a partnership between Calvin Theological Seminary, Calvin University, and the Michigan Department of Corrections that provides a couple dozen inmates each year an opportunity to pursue a bachelor’s degree in faith and community leadership behind bars—before applying. “I wasn’t really in the right frame of mind, or at least not religiously [initially]. But after witnessing some of the students in the program and the change that I saw in them, I realized that this may be something that I should look into,” said Baker.

Baker calls his first year “a train wreck,” as he was holding onto his old life while trying to embrace a new path.

“It was a constant struggle, even when I first joined the CPI program,” said Baker, “I wasn’t quite ready to cut it loose [old lifestyle].”

With a first year GPA of 1.67, which he says is “the lowest in CPI history,” Baker was challenged by CPI director Todd Cioffi. Baker was the painter for the facility, it was a passion he had developed over the past 15 years. In fact, even before entering the program, Baker was one of the guys who painted the Calvin murals on the classroom walls.

So, “when Cioffi threatened to take away my ability to paint, because my grades were slipping, I was nervous,” said Baker. It gave him the challenge he needed.

“It took the first year of Calvin for me to begin to kick the Devil to the curb,” said Baker.

But with the support of the CPI community, he kept moving forward.

“Throughout my 20-plus years [in prison] I have never experienced anything like this program,” said Baker. “The Calvin community has been here for me whenever I needed them, in fact sometimes I didn’t even think I needed help and it turned out that I did.

“Last summer I was in the hospital for three weeks, and when I returned I was way behind, and the funny thing was that I didn’t have to ask for help, the community came to me and asked where they could help,” said Baker. “They took time out of their schedule to help me catch up. Without the community I am not sure that I would still be in this program. I owe them more than I can ever repay.”

After the rough first year, Baker is holding a 3.0 GPA, but more importantly he has reestablished an identity. “Now I realize that I don’t have to perform to be accepted. I am part of a community that accepts me as I am.”

On Friday, September 9, 2022, Baker in his senior year of the CPI program, just two semesters away from earning a bachelor’s degree from Calvin University, was asked to speak to the incoming class—a far cry from where he was even five years ago.

“I want them to know that we are all in this together, one may be weak, but together we are strong.”