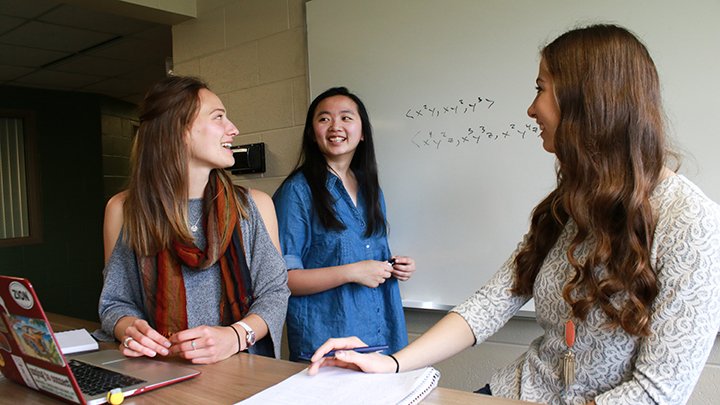 “Our track record of scholars and honorable mentions tells the world what we already know, the caliber of the students and research going on at Calvin are on par with what is going on at best schools anywhere in the country,” said Carolyn Anderson, a professor of chemistry and Calvin’s liaison with the Goldwater Scholar program.

Over the past decade, Calvin has been a national leader in producing Goldwater scholars and those recognized as honorable mentions; this year was no exception.

Each summer at Calvin, approximately 90 students stay on campus to participate in summer research with faculty across the science division. “These projects allow students to work closely with faculty to discover what it really means to be a scientist,” said Anderson. “These experiences are critical, not only for the Goldwater nominees, but for all of our students, as they work to discern their future vocation.”

“I am drawn to the inherent vulnerability of research. Asking questions, designing an experiment, making mistakes, and possibly finding out something really cool in the end, are all parts of the process,” said Hattie Greydanus, one of the this year’s Goldwater honorable mentions.

Greydanus has been working with Dr. Mary Santelmann in the College of Earth, Ocean and Atmospheric Sciences at Oregon State University. Greydanus’ research focused on the co-benefits of urban green infrastructure. “In order to cope with rising sea levels, increased urban population density, and extreme weather, I hope cities can have discussions about ecosystem health, design sustainability, and social justice, and make decisions that reflect these positive, united goals,” she said.

Jackson Ross, Goldwater honorable mention, will be continuing his research with Professor David Benson on an orphan protein. “The larger hypothesis of our work suggests that metal redox cross-links like the ones we study may have something to do with cancer prevention,” he said. “I really enjoy the mix of problem solving and learning involved with research. Of course, it doesn't work, so you do it again but better, but along the way you're constantly learning.”

This past summer, Joyce Chew, fellow Goldwater honorable mention, did research in the field of computational algebraic geometry with Professor James Turner. This year, she will be working with Professor Douglas Vander Griend to investigate the limits of modeling protein oligomerization.

“I am fascinated by the use of computational methods in mathematics to solve relevant problems in the sciences, and I want to pursue a research career in this area,” said Chew. “I am looking forward to integrating all three of my core interests--mathematics, chemistry, and computer science--in a way that contributes to scientific knowledge.”

Goldwater honorable mention, Elysa Wolf, will be working with Professor Rachael Baker this summer on a project titled: Combatting Antibiotic Resistance. “I am excited for the opportunity to take ownership of a project and continue to learn hands-on in the lab environment with an amazing group of students under the mentorship of Professors Baker and Wilstermann,” she said.

The potential to change science

“These are the top students at colleges and universities around the country,” remarked Anderson. Because of this and the national nature of the competition, being a Goldwater honorable mention will be recognized by graduate school admissions committees as a significant accomplishment, she said.

“Students like Joyce, Jackson, Elysa, and Hattie have immense future potential to fundamentally change the face of science. That ability is being honed and focused in the work that they are doing now,” said Anderson. “These experiences will help them to decide exactly what field they will focus on in graduate school and beyond. This is an exciting time for all of our students, as they begin to see themselves as scientists and recognize their potential. It is my honor to walk with them through that process.”