A Common and Rare Purpose 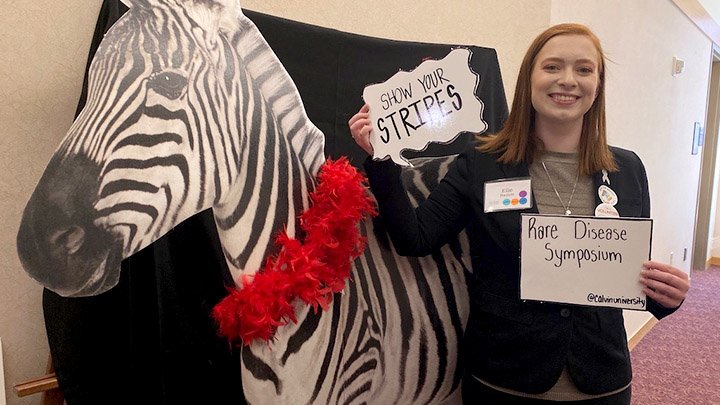 Elle Hazlett has been dealing with a degenerative pain condition for years.

“It almost killed me a year before coming to Calvin,” said Hazlett. Fortunately, she was able to find treatment that allowed her “to have a second life.”

When she arrived at Calvin, Hazlett was determined to do what she could to help others like her, the 35 million Americans who were living with a rare disease—a condition with a prevalence of fewer than 1 in 200,000 in the U.S. (it varies slightly from country to country). With approximately 7,000 different types of rare diseases, collectively they affect 1 in 10 Americans.

The obvious path for her seemed to be a pre-med track. “When you think medicine, you think doctor,” said Hazlett. She liked chemistry in high school as well, so the path she was starting down seemed to fit.

Hazlett also soon found like-minded people at Calvin to guide her on this path. Amy Wilstermann, professor of biology, and Rachael Baker, associate professor of biochemistry, had more recently begun digging deeper into rare disease themselves.

“It’s interesting, because when Amy and I were college students we both talked about wanting to do research in rare diseases,” said Baker. “But it wasn’t a popular area for research, so that passion got lost along the way. We’ve always been passionate about areas that are neglected, areas that aren’t as prestigious or those that don’t typically get a lot of funding, but are really important.”

So, in 2016, Wilstermann and Baker took that passion they had developed decades prior off the shelf, and started digging.

“As we explored rare disease, we realized there was a huge need. There wasn’t a lot of research being done in this area,” said Wilstermann.

“One of the most interesting things with rare disease is that patients and families are really connected to the research, to the point where researchers know them,” said Baker. “When we surveyed what was happening in Michigan, we realized a lot more could be done to help connect families with what they were looking for.”

Hazlett, as a rare disease patient herself, was drawn to Wilstermann and Baker’s personal approach.

“One thing professor Baker and Wilstermann do well is making everything patient-centered. Even in the lab, when we were talking about scientific projects, they always bring in patient stories,” said Hazlett.

She recalls a lab experience where the student researchers were working on a specific condition of a patient, and the professors brought in the impacted family to meet the students.

“Researchers sometimes get hyper-focused on the science of it,” said Hazlett. “But professors Baker and Wilstermann make it so personal, they constantly remind us that there’s a reason and purpose for everything we are doing.”

Hazlett had found her place at Calvin, but was discovering her calling would look different than she had originally planned.

Through her involvement with a couple of student organizations on campus, Hazlett found her passion to help people with rare diseases would move from research to advocacy. So, her junior year, she switched her major from biochemistry to strategic communication.

Hazlett’s scientific background, her personal experience with a rare disease, and her passion for advocacy, would make her a valuable asset to helping Wilstermann, Baker, and a team of students make a difference in the rare disease community.

In 2018, Calvin hosted their inaugural Rare Disease Symposium, a way to bring patients, researchers, and doctors together for a one-day event. The following year, Spectrum Health hosted a similar event of their own. For 2020, the two organizations decided rather than duplicate their efforts, they’d join together and invite MSU’s College of Human Medicine to the table. The event held at the Prince Conference Center on Calvin’s campus maxed out the room with 400 people.

Hazlett, who had been an attendee at the 2018 symposium, not only helped plan the 2020 edition, but also served as a moderator on one of the panels. And in fall 2020, she’d play a pivotal role in launching the Rare Disease Network—the formalization of an ongoing collaboration between Calvin University, Spectrum Health, and MSU College of Human Medicine to be the central resource for Rare Disease support and education in Michigan.

“This is a place where we knew Calvin could step up and lead. This fits right with our mission,” said Wilstermann. “The purpose of this network is to serve patients well. Spectrum has the connection to patients, MSU has connections to researchers, and we have students from multiple disciplines involved in research and advocacy for rare disease. Patients can only stand to benefit from this collaboration. They will now have a central place to find information and resources, access to multiple events throughout the year, and find meaningful community here in Grand Rapids.”

Calvin students, like Hazlett, have benefitted from this as well. From bench research on rare disease to writing K-5 curricular materials, from illustrating a children’s book to summarizing medical research so that it’s readable and understandable for patients, students from social work to nursing, from biochemistry to communications are using their skills to benefit rare disease patients.

“We probably would not have launched the Rare Disease Network without our students, and Elle played a pivotal role,” said Baker. “She pulled everything together, helped organize people, ran a social media campaign, developed a website, did online platform research. It was cool to see her come into her own and use her skills for Rare Disease advocacy.”

From February 23-27, the Rare Disease Network will host the 2021 Rare Disease Symposium, a series of events spanning five days meant to connect patients and their families with researchers and doctors—to connect the scientific and patient communities. The events are free for all attendees.

“When you have a rare disease, you have to be an advocate for yourself in order to survive in a world that you often don’t fit into,” said Hazlett. “Unfortunately, many people with rare diseases do not have a platform or are unable to have a voice to advocate for themselves. In such cases, gaps arise in understanding and empathy between the person affected by rare disease and those surrounding them—doctors, families, friends, and so on.”

The Rare Disease Network is aiming to close that gap … and so, is Hazlett.

“I would like to be a part of helping to bridge that gap by using my own voice and experiences to help those like me.”