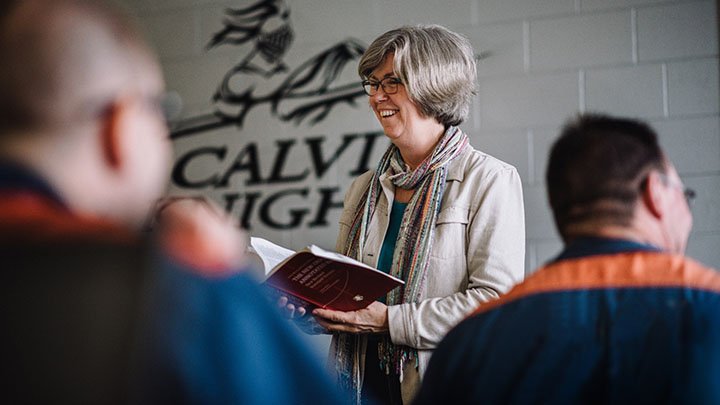 The Calvin Prison Initiative is now in its third year with a current enrollment of 57 students.

There are many resources and services in the Grand Rapids area that are available to citizens transitioning out of prison and back into society, but these are not always easily accessible or made known to such citizens. How can these returning citizens find what they need when they don’t know where to start? Where can they go for assistance, and how will they get there? Who can they call to set up appointments beforehand?

According to Calvin Prison Initiative (CPI) program assistant Julie Bylsma, returning citizens discover these resources primarily by word-of-mouth, or from their parole officers.  “Some [parole officers] tell them a lot about Grand Rapids and are interested in seeing them succeed; others just give them a document with phone numbers,” Bylsma said. “But they need something that actually shows them information and helps them understand how to get there.”

After two years of working on a solution to this issue, CPI and the Henry Institute at Calvin College have created the Returning Citizens Resources online application: a user-friendly, interactive, spatial map of resources and services in the Grand Rapids area to empower returning citizens in their transition out of prison and into society.

The process of creating the app began with an idea from political science professor and Henry Institute director Kevin den Dulk following a church discussion group meeting he attended on restorative justice. “A returning citizen joined us one evening and I asked about the greatest challenges he faced when he got out of prison. He noted the nitty-gritty problem of tracking down where to find services; information was fragmented among a variety of groups, and those groups often didn’t know what others were doing,” den Dulk said. “I realized that was a problem we could tackle through some intrepid data-sleuthing and geographical work.”

Thus, in fall 2015, the work began with den Dulk reaching out to geography professor Jason VanHorn to propose his idea. “Kevin approached me and said he was interested in issues of justice. He told me he was working on an interplay between civil service and organizations that are friendly for re-entry services,” VanHorn explained. “He then asked me, ‘Could you map those?’ And that simple question led us to the next steps of truly exciting research.”

VanHorn then approached Julie Bylsma, a senior biology student at the time, who was taking Intro to GIS (Geographic Information Systems), and who he knew was also interested in criminal justice. Bylsma had begun her work with the Calvin Prison Initiative (CPI) in fall 2015 as well, and she agreed to begin collaborating with VanHorn and den Dulk on the project. She worked on the project through spring 2016 in Advanced GIS, and with Jon Gordon, who was a research fellow of the Henry Institute at the time, gathering most of the data. Bylsma also worked with VanHorn and den Dulk the following year in a research position through the Henry Institute up until the application went live in August 2017.

From the beginning, the goal was to make the app a one-stop resource for returning citizens to find everything they might need to smoothly reenter society. The categories of resources and services included in the app are: housing, employment, food & clothing, legal assistance, counseling services, welcoming churches (and organizations), transportation, and other services. “We wanted it to be as easy and simple as possible for the users,” VanHorn said. “You don’t see technical jargon and geography vocabulary on there, which could easily be the case.”

As the director of the Henry Institute at Calvin, den Dulk believes the institute is well positioned to oversee this kind of project. The institute provides resources for scholarship; encourages citizen involvement and education; structures opportunities to disseminate scholarly work; seeks avenues to communicate and promote information about Christianity and public life to the broader public; and motivates and trains future scholars and leaders. “We have a sweet spot for projects that have research potential while also addressing real-world problems,” den Dulk said. “On this project, for example, we can serve a disadvantaged group through research, especially by using spatial analysis, or mapping, to identify ‘service deserts’ for returning citizens.”

One of the ways the Henry Institute takes on projects like these is through a program called the ‘Civitas Lab,’ which pairs students as paid assistants with faculty who have both technical knowledge and great passion. “Bylsma and VanHorn are the dynamic pair who brought these pieces together, applied the necessary technical know-how, and got the map out to the public,” den Dulk said.

The Calvin students at Handlon Prison are already excited to use the new app. “In talking with the Handlon students, a few of them have told me that their cellmates or friends in the prison who are getting out have been looking forward to using it. One person used it in his parole plan, as you have to have a re-entry plan,” Bylsma said.

“When we met with prisoners at Handlon and they saw the app for the first time, their reactions were very positive,” VanHorn added. “They indicated overwhelming appreciation for the work, and that it would be a very valuable resource not only for returning citizens, but also for their families who can aid them in the transition back into society. It was really encouraging.”

Hopes for the app

Bylsma, Den Dulk, and VanHorn each have high hopes for the app, as there has already been great feedback from the Handlon students. They hope the mission and goals of the app don’t stop in Grand Rapids, though.

“I’m hoping the project paves a way for replication across the country and places around the world, because I think it’s possible,” VanHorn said. “Our overarching hope is to enable independence and an ability to choose in these returning citizens.”

“Right now [the app] is limited to Kent County, but we are working to secure funding to grow into as many Michigan counties as we can, and perhaps inspire similar work in other states,” den Dulk added. “I am most excited by the prospect that the map becomes a go-to resource for the post-release life-planning of returning citizens and their families. I’m also excited that we can start using our data to understand why there is often a mismatch between the locations of services and returning citizens.”

Bylsma believes providing this resource for returning citizens is an important piece in pursuing criminal justice. “If [returning citizens] want to be successful, we want to give them the tools to become successful. It’s up to them to use the resources, but why would we ever handicap re-entering citizens from using them? If the resources are out there, and people are willing to give that assistance, it shouldn’t be that hard for them to find those services,” Bylsma said. “We would love to see prisoners come out and be able to get the help they need within a matter of hours or days, and the continuing help as well when they have their immediate needs met so they continue to be successful.”

The future of reentry assistance

VanHorn is working with MDOC (Michigan Department of Corrections) and other organizations to see how they can get the word out about the app. The app is the first of its kind; a few organizations have collected information for re-entry, but this is the most comprehensive resource for returning citizens with pins displayed and direct links to contact information. There is great hope from the creators of the app that their efforts will be duplicated.

“The court gave them punishment, and they served their time, so now we have to trust that they want to succeed and need to allow them to do so—we can’t tie both of their hands as they’re already walking into a terribly difficult situation,” Bylsma concluded. “It’s much different than someone starting their life over; this is often relearning adulthood. If we really gave them the chance to prove themselves without handicapping them in the first place, I believe we’d be impressed.”