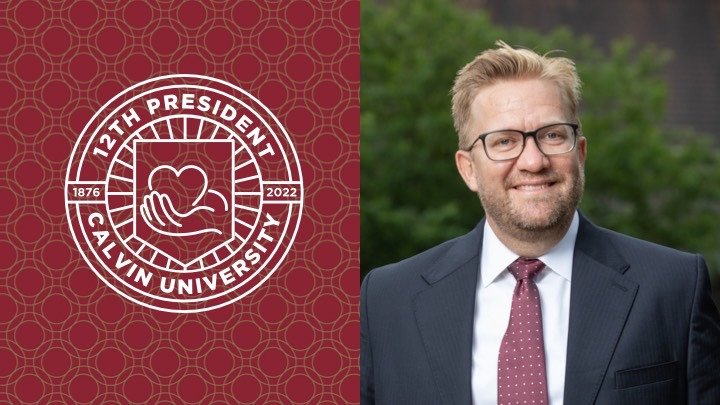 Calvin University is hosting a series of events during the month of October that will culminate in the inauguration of the institution’s 12th president. The formal inauguration ceremony for Dr. Wiebe K. Boer will take place at 4 p.m. on Wednesday, October 26, 2022, in Calvin’s Van Noord Arena.

During the inaugural ceremony, which includes an international guest list, the broader community will be introduced to Wiebe and Joanna Boer and their family. Dr. Boer will share about his aspirations for the university consistent with the ceremony’s theme: “Renewing Calvin’s Call to Global Good.”

“We are excited to formally welcome Wiebe and Joanna Boer and their family into the Calvin community this month,” said Bruce Los, chair of the Calvin University Board of Trustees. “Dr. Boer and Calvin University’s vision and values are in alignment and are intentionally woven into all of the inauguration events this month.”

Provost Noah Toly is co-chairing the inauguration committee along with Los. He says both the ceremony and the events preceding it are not only about introducing the Boers, but also introducing or re-introducing Calvin to various communities.

“Whenever there is a presidential transition it provides a tremendous opportunity for an institution to make sure its various constituencies understand its mission and vision,” said Toly. “Throughout this month’s events and the inauguration ceremony, we hope both those who are familiar with Calvin and those newer to the community, will be reminded of our compelling mission and will be inspired by President Boer’s vision for Calvin.”

Toly says Boer's vision calls the university to lean further into the work of renewal in the areas of diversity, sustainability, and strategic partnerships, and to live out what the writer of Proverbs instructs: “do not withhold good from those to whom it is due, when it is in your power to act.”

Boer’s tenure at Calvin University officially began on July 1, 2022. Since he’s arrived, the Calvin Prison Initiative has been visited by the undersecretary of the U.S. Department of Education, the university has signed a memorandum of understanding with SunFundED to pursue solar energy solutions for the campus, and Calvin has welcomed its most diverse incoming class of students. The university also opened its School of Business, developed a key partnership with Pine Rest through the School of Health, and launched an entrepreneurial incubator, the Calvin StartUp Garage.

“There’s a lot of positive momentum happening at Calvin right now,” said Los. “Calvin has been a global leader in Christian higher education for decades and President Boer is committed to working alongside talented faculty, staff, students, alumni, and partners around the world to extend Calvin’s mission and expand its reputation.”

Check out 12 things President Boer discovered about Calvin during his first 100 days as president.

Leading up to the formal ceremony, the university will host a series of events highlighting a few key priorities of the new president.

Wiebe K. Boer, PhD, is Calvin’s 12th president. He has spent the past two decades serving in the private and social sectors in four countries on two continents. His work has consistently focused on leveraging private capital to create social impact.

Boer earned a doctorate and two master’s degrees from Yale University and a bachelor’s degree from Calvin, all in history. He has served professionally in economic development, management consulting, philanthropy, and impact investing. For the past 12 years, Boer was living in Lagos, Nigeria, most recently serving as CEO of All On, a renewable energy investment fund of Shell.

Boer’s wife, Joanna Bachew ’03, born and raised in Trinidad and Tobago, holds a master’s in human resource management from the University of London and is the CEO of Empire Jane, a Nigerian soft home furnishings company. The couple have four sons: Jehan, Stephan, Gerrit, and Markus.