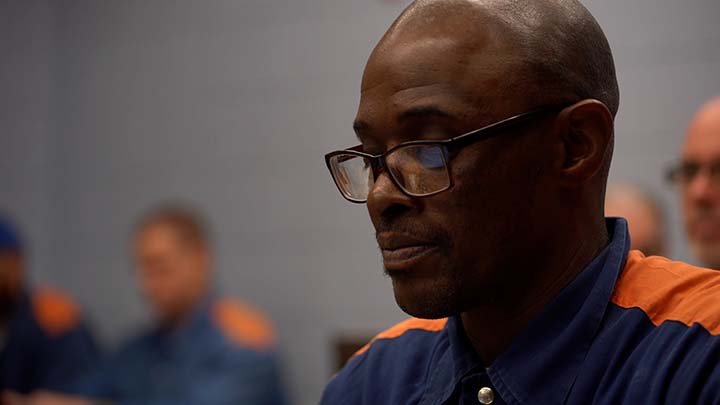 On Monday, May 9, 2022, 45 inmates will receive bachelor’s degrees behind bars. The first three graduating classes (Class of 2020, 2021, and 2022) from the Calvin Prison Initiative program will receive their bachelor’s degrees during a Commencement ceremony held inside the confines of Handlon Correctional Facility in Ionia, Michigan. The ceremony, which will also honor those in the program receiving their associate degrees, is the first-of-its-kind in the state of Michigan.

The Calvin Prison Initiative, a partnership between Calvin University, Calvin Theological Seminary, and the Michigan Department of Corrections (MDOC), was started in 2015. Faculty from the university and seminary teach courses at Handlon Correctional Facility each semester and students who complete the five-year program earn a bachelor-of-arts degree in faith and community leadership.

The approximately one-hour ceremony begins at 1 p.m. and will take place outside in the yard of the prison under a large white tent. The guest list includes faculty, families of students in the program, donors, and VIP guests from across the state of Michigan. The faculty in attendance will be in their academic regalia, and the graduates will be wearing caps and gowns.

John Rottman, professor of preaching at Calvin Theological Seminary, and Jerline Riley, whose son was a victim of one of the graduates of the program (read her incredible story here), will provide Commencement addresses. Patrick Campbell, a 2020 graduate, will deliver the student address. The presidents of Calvin University and Calvin Theological Seminary, the director of MDOC, and the warden of Handlon Correctional Facility will also be part of the program.

Todd Cioffi is the director of the Calvin Prison Initiative (CPI) program. He’s seen how having the program at Handlon has not only shaped the students themselves but is also having ripple effects.

“We know that most of the students in this program are lifers, meaning they will remain inside prison walls for the rest of their lives. What this program is doing is recognizing these students’ humanity and equipping them to be productive citizens within the prison system, helping them to reform it from the inside.”

While most graduates will remain inside prison walls, 12 students in the program have already been released—all 12 are gainfully employed and many are working for renewal in areas where they once caused harm.

“Such an outcome is no small matter,” said Todd Cioffi, director of the CPI program. “In America, nearly half of those released from prison will return to prison in three years, and two-thirds will return to prison in five. However, for those who receive a college degree in prison, the recidivism rate drops below ten percent. And so far, for those who receive a Calvin degree, the recidivism rate is zero.

“Of course, receiving a college degree in prison offers much more than lowered recidivism rates, as important as that may be. Christian education is, as we often say at Calvin, about engaging God’s world and our calling in the world,” said Cioffi, “This calling includes seeking justice, extending mercy, and loving the outcast. Coupled with Jesus’ command to visit those in prison, offering a Christian education inside a Michigan prison is simply the right thing to do. And, in turn, we ask our CPI students to seek justice, mercy, and love for those in their midst. Indeed, we encourage our students to use their gifts to engage God’s world and Jesus’ calling on their lives. The result, of course, is transformed lives and transformed prisons.”