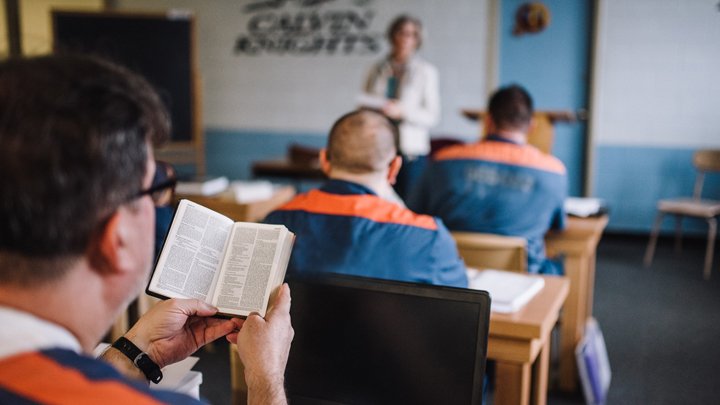 The Calvin Prison Initiative offers inmates an opportunity to earn a bachelor of arts in ministry leadership degree.

“What is justice and what is morality?” asks Corcoran.

He pauses, scans his Philosophy 153 class, then continues.

“Plato said we first need to decide what it means in a city.”

“What is the ideal city?” Corcoran asks.

A handful of students in unison reply. “Kallipolis.”

Corcoran continues, grabbing a piece of chalk, “there are three classes of people in the Ideal City.” He writes and says: “Guardians, rulers and producers.”

The students, a few with laptops, many with pen and paper in hand, eagerly record everything they can.

“I’ve been waiting 20 years for this opportunity,” said Larry, a student in the class. “I’m going to ask a million questions, want to live these ideas, want to experience them.”

“This has been something I’ve been ordained to, have a passion for, to pursue a rigorous academic education,” said David. “To have this opportunity is an answer to prayer and an opportunity to fulfill my calling.”

David and Larry, adorned in blue pants and blue shirts, black shoes and white socks, are first-year students at Calvin College. They are beginning their pursuit of a bachelor’s degree as members of the class of 2020 inside the Richard A. Handlon Correctional Facility in Ionia, Michigan.

“We live in an environment of low expectations. This program has high expectations. It demands more of us than the system does, so that’s liberating,” said David. “When you are denied something for so long that you desire so badly, when an opportunity like this comes along, it’s difficult to overestimate how important something like this is.”

The newly accredited program is called the Calvin Prison Initiative. It gives 20 inmates each year the opportunity to begin pursuing a bachelor of arts degree in ministry leadership. The students take classes in ministry and theology as well as Calvin’s liberal arts core courses. Inmates from any of the 31 prisons in the Michigan Department of Corrections system can apply to the program, and each August admitted students are transferred to Handlon.

“God is transforming lives in amazing ways in prison,” said David Rylaarsdam, professor of historical theology at Calvin Theological Seminary. “Calvin wants to join the church behind bars, not only to help it to grow but to change prison culture. It’s an exciting Kingdom project. When education equips prisoners to be agents of renewal, everyone wins.”

Rylaarsdam is quick to point out that transforming the prison culture is not a pipe dream. “It’s been [done before], so we’re hopeful it can happen in Michigan.”

Perhaps there’s been no greater example of this than what’s taken place at Louisiana State Penitentiary in Angola, notoriously known as one of the bloodiest prisons in America. Since New Orleans Baptist Theological Seminary began offering higher education to prisoners, violence in the prison has dropped by 80 percent. Angola now has 30 congregations led by inmate pastors, and these congregations offer about 400 worship services and Bible studies per month. Since 2010, John Rottman, professor of preaching at Calvin Seminary, has been taking a class of students each year to witness how the power of the Gospel has transformed Angola.

An open door at Handlon

In 2011, Rylaarsdam was made aware of growing interest for educational opportunities from inmates at Handlon who wanted to become equipped to help transform the prison culture.

So Ronald Feenstra, academic dean at the seminary, called the prison several times and then wrote a letter to the warden at Handlon asking if they could offer classes to inmates. After several weeks, a door finally opened and Feenstra and Rottman were invited to Handlon. The opened door? A recommendation by Dan Heyns, who was then the head of the department of corrections. Heyns is a grandson of Garrett Heyns, who received Calvin’s first Distinguished Alumni Award in 1965 for his national leadership in prison reform. Heyns knew of the Calvin name and recommended that the warden make this happen.

So began the Tuesday night classes run by the Seminary, which generated much interest among inmates and Calvin College and Calvin Seminary faculty.

A few years after these classes began, Heyns went with the president of the Calvin Seminary Board and other leaders to visit Angola and took notice of its remarkable transformation and asked, “Is this possible in Michigan?”

After much research and committee work, Rylaarsdam wrote a proposal for what it would take to offer a full bachelor of arts degree in ministry leadership to inmates. He then approached Calvin College about accrediting the program and the college’s faculty senate approved a revised proposal in February 2015. Shortly thereafter, Todd Cioffi, professor of congregational and ministry studies and Christiana de Groot, professor of religion, were selected to be co-directors of the program, applications were sent out to inmates and returned, and acceptance letters were distributed in early August.

“It all literally fell into place, nothing short of divine intervention,” said Cioffi.

For 20 inmates across the state, that acceptance letter gave them something that they say is in short supply behind bars: hope.

“I was wandering aimlessly with no purpose until Calvin,” said Armondo.

“This program shows that God is of second, third and fifth chances,” added Raymond.

“I had a lot of presents in my life, none as big as this one. Calvin is helping me fulfill my mission in life. It’s marvelous the act of grace that they did for us,” said Patrick.

Those faculty, staff, donors and students who have been instrumental in getting the program off the ground see this as part of the Christian calling, even though it’s something that has rarely been done to this extent. Dozens of institutions offer courses to inmates, some the opportunity to get an associate’s degree, but very few offer a four-year accredited bachelor’s degree. And Cioffi says, “Calvin College is the first Christian college offering a full degree that we know of.”

Julie Bylsma, a junior biology major studying on Calvin’s Knollcrest campus, makes the 40-minute trip to Handlon each week, bringing in books and tutoring inmates, whom she refers to as her fellow peers—a term that is not lost on those she serves.

“We live in an environment and system where we’re defined by the worst mistake we ever made. Generally, that’s how society sees us—as convicts, as felons,” said David. “So when we have people like Julie saying ‘you are a peer,’ it’s very humanizing, it’s a move towards restoring our dignity, our humanity and goes a long way in us being able to see ourselves in the image of God, as God’s children.”

De Groot approaches her students on the Handlon campus in the same way by reinforcing their identity as Calvin students in small, but significant ways, writing “Welcome Calvin students” on the chalkboard, bringing them “their” student newspaper Chimes each Friday.

“We want them to know their Michigan Department of Corrections number is not what defines them. They know they’re a child of God. That’s good news! We reinforce it saying you are now a member of this learning community—that’s meant hope to them. They are very grateful,” she said.

And de Groot wants them to know they are valued participants, as students. This past Christmas Eve de Groot drove to Handlon to hand deliver their fall semester grades.

Shawn was in the gym when he heard news that de Groot was on campus. He ran back to his unit, put on his blues, and had the group run down to the classroom. He saw her pull out the grades.

“I was looking for any letters. I saw three As in a row,” said Shawn excitedly. “You realize you can’t breathe when you take that breath, wow! I was like let’s get ice cream, let’s have pizza and celebrate.”

“This is their Christmas present,” said de Groot, who said seven students finished the fall semester with a perfect 4.0 (three courses), and the entire class had passing grades.

Bylsma says treating students at the Handlon and Knollcrest campuses equally communicates the college’s view that we are all valued partners in this educational project.

And more than the individual benefits, there are benefits to the rest of the prison community and far beyond. Administrators of the program along with staff with the Michigan Department of Corrections see the wider implications, which Rylaarsdam spent a full year studying.

Rylaarsdam says multiple studies, including one done by the RAND Corporation over the last 3-4 decades show that “education of any sort in prison will lower recidivism rates by 43%. And, the higher the degree, the more dramatic recidivism is affected. He says the recidivism rates for inmates who have gone through the best college prison initiatives in the country, such as those offered through Bard college and New York Theological Seminary, are essentially zero.

“When recidivism drops, taxpayers win, safety of neighborhoods wins, safety of corrections officers wins. And there are lots of minor benefits, too,” said Rylaarsdam. “Do you want to develop faculty? Send them to prison. It opens whole new vistas to faculty pedagogically. They take questions on texts back to their Grand Rapids’ classrooms.”

DeWayne Burton, who recently was named warden at Handlon Correctional Facility, is behind the effort to bring more vocational training into his prison. While he says it takes 3-5 years for culture change to take place, he is already seeing some fruit from these efforts.

“Only one ‘class 1’ ticket has been written on a vocational trade prisoner since October,” said Burton. “It’s nearly a minor miracle. You can’t argue with the numbers.”

Addressing the class recently, Burton said: “You guys are the base of the soup, keep adding water.”

Burton’s words reflect the purpose of the program, says Cioffi, to equip a base of leaders to be sent out into the Michigan prison system and reform it from the inside. And to prepare those who will be released someday so they are equipped to flourish as productive members of society.

For Dale, he’s looking forward to speaking to his 16-year old daughter as an educated individual, not a convict, as she makes a decision of whether or not to go to college.

For Jesse and Shawn, they’ve succumbed to the likely reality that they’re in prison for life.

“This is my world, I want to do the best I can to make this world the best, to change this place. Curve the recidivism rate,” said Jesse.

“Hopefully this program and the behavior of the guys will show MDOC that we are a resource. There’s no reason we can’t teach classes, do more than corrections allows us to do,” said Shawn.

As for the mission of Calvin College, to equip students to think deeply, to act justly, and to live wholeheartedly as Christ’s agents of renewal in the world, there seems to be no better place to see this happening.

“Working with the students at Handlon affords the college a unique opportunity to enact our Reformed vision beyond the immediate campus and to embody justice, compassion and hope as we equip students to be agents of renewal within the prison,” said Cheryl Brandsen, the college’s provost.

“There aren’t parts of creation we give up on, that’s not the God we serve,” said Rylaarsdam. “We believe all people are made in the image of God. We believe when God’s light shines in the darkest places of life, renewal is possible.” 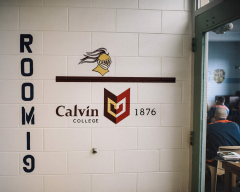 The Calvin classroom at Handlon Correctional Facility in Ionia, Michigan. 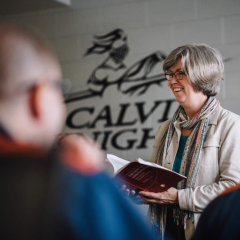 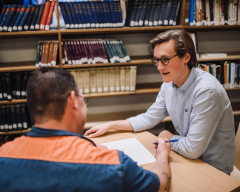 Calvin student Klaas Walhout, one of the regular tutors from Calvin's Knollcrest campus, working with a peer at the Handlon campus. 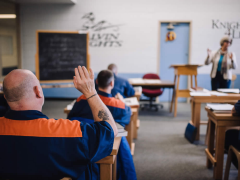 Students engage in discussion during a class taught by Chris de Groot. 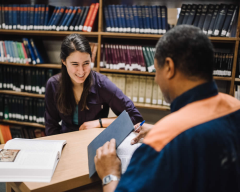 Calvin student Julie Bylsma, a regular tutor from the Knollcrest campus, works with a student at Handlon.