An unimaginable adoption story born out of tragedy 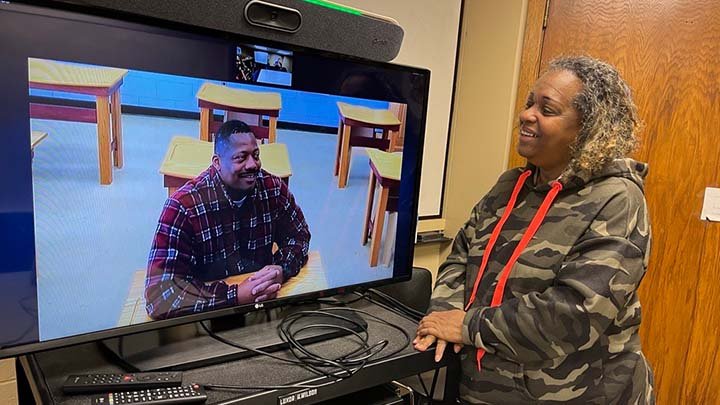 Valmarcus Jones (at Handlon Correctional Facility) and Jerline Riley (on Calvin's campus) talking to one another.

The two begin to catch up on life, just like most any mother and son would who hadn’t seen each other for a time.

This relationship is a bit more complicated. Valmarcus (Val) is adopted, well … not officially. But seeing the way the two look at each other and interact with one another, it’s clear that there is love there.

But there’s something about Val’s “adoption” that’s so far from textbook … in fact, it’s completely unimaginable. He and Jerline grew up in the same neighborhood. In fact, Jerline lived next door to Val’s aunt. And their family connection early on would bring them back together years later.

But the way they would be reunited was the furthest from what either would have asked for.

Val was a pretty good athlete and popular in high school. And those qualities led him to being a prime recruit. But other factors in life, including, among other things, the absence of a father figure, led him to take his talents off the court and instead to use them on the streets—selling drugs.

“I began to help out this guy who had a couple of houses and stores, but he was a drug dealer,” said Val.

Val appreciated this guy’s financial success and the drug dealer valued Val’s ability to move drugs quickly. This led to more responsibility, dealing harder drugs, and eventually would lead him to prison for dealing.

When he was released in 1994, he returned to the streets, not reformed, but with more street cred.

“I gained some stripes,” said Val. “I was promoted because I went to prison and didn’t name names. So, when I came home, I was the man.”

But being “the man” didn’t mean Val had nothing yet to prove.

“The streets would test you, like at school every few weeks you have to show what you learned. And so, the streets were testing me at the time, so I always felt like I had to prove a point,” he said.

Returning to the court

It was a few years later that a big federal drug conspiracy came down. Val was indicted and headed back to prison. A year later, evidence was presented that led to Val being convicted of Jeffrey’s murder.

At the trial, Jerline stood up … and to the shock of everyone in the courtroom … offered forgiveness.

“I was upset,” recalled Val of his reaction at the time. “I wasn’t yet repentant, I didn’t come to a place of repentance yet, I had a really hard heart at the time.”

“She really put it in the hands of God,” said Val. “She said, ‘I can’t do anything about it now, so I’m going to give you over to God. And my prayer is you go inside prison walls, and you get to know Him.’”

The long road back

During Val’s first 15 years in federal prison, Jerline would relay onto his family ‘tell Val to call me, I forgive him.’

What she received from Val? Radio silence.

But that silence didn’t mean things weren’t happening inside the walls of the prison and the walls of his heart.

Val had received Jesus Christ as Lord, and he was practicing living a sanctified life. He was going to church, even mentoring other inmates.

“You could tell God was working on my heart, grounding up the hard soil,” said Val.

And Jerline was hearing from Val’s family that his life was changing.

“I got news he was in the ministry, and I was like ‘wow, God you are getting to him,’” said Jerline. And then, she got word he was preaching. “Oh, come on Lord,” she was saying. “I kept praying that he would get it all right with God, get himself together.”

Then, a law came down that cut his sentence in half for the drug charges. In 2012, Val had completed his federal time and was now sent back to Michigan to serve out his life sentence for Jeffrey’s murder.

Renewal of heart and mind

After bouncing around for a few years to a few different prisons in Michigan, Val ended up at Alger Correctional Facility. There, he met with the warden who was the sister of the former boss (warehouse) he worked for while he was in federal prison.

“I saw it all as the hand of God just unfolding,” said Val.

And so too was one of the most incredible redemption stories ever told.

Val entered Handlon as the Calvin Prison Initiative (CPI) program’s first cohort was just starting. Val knew of Calvin, growing up just a few blocks from the old college campus. And when he met the warden at Handlon, the warden told Val he wanted him in the university’s next cohort. In the meantime, Val jumped into the non-accredited classes, and when the application opened up for the second cohort, he put his name in, and began.

Meanwhile, Val’s brother had just been released from prison himself and started a lawncare business in the neighborhood he and Val grew up in. He would cross paths often with Jerline and they would talk a lot, and she told him ‘Talk to your brother.’

“Well, the first time I saw my brother, and I hadn’t seen him since we were kids, was when he came up to visit me, and he said, ‘bro, it’s time.’”

“He said, ‘to talk with Mother Jerline,’” remembers Val. “And tears started to roll down.”

“I called her, and I just said Mother Jerline, I’m sorry, I’m sorry for taking Jeffrey’s life, and she just shouted, she cried: ‘you don’t know how many years I have been waiting just for you to say that.’”

“Hey, got me another son, Lord,” says Jerline of that day.

Over the past few years, Jerline has witnessed Val receiving his associate degree and on May 9, 2022, will witness him being awarded his bachelor’s degree from Calvin University during a Commencement ceremony inside Handlon Correctional Facility.

“I saw the hand of God with CPI. This is all I wanted to make things right. I wanted to get my life together. I wanted to be the man of God my grandmother and great aunt raised me to be. So, when CPI came in, I was like man, this is God-sent. I felt like it was my old neighborhood coming inside prison walls to say, ‘we haven’t forgotten you.’”

“Everything that at a young age was prophesied over my life, like I would go to college, I would be a minister or a pastor, these things actually manifested inside prison for me. And my grandmother used to jokingly say this when I was little, she used to call me doctor. ‘Um, Doctor Jones, come here boy,’ said Val. “And I believe that with my whole heart, and that may not happen while I am in prison, but I truly believe that these doors are going to open and one day it’s going to happen when I’m going to be considered Dr. Jones. I truly believe that. My heart desires to continue my education. I’m in love with learning and developing and helping others.”

“To see what he’s doing now, in college, going to get another degree, helping other people, lifting other folk up, ministering to other folk, I said, ‘Lord, this is more than I could have asked for,’ said Jerline, “and only thing I would want to happen for him right now is I live to see him come out and we out doing this together, trying to stop the violence.”

Currently Val and Jerline, though separated by barbed-wire fencing, are working together, sharing their story in many spaces, trying to help create a platform in the state of Michigan by which victim-offender mediation can happen, if desired by both parties.

“Son, we in this together,” said Jerline.