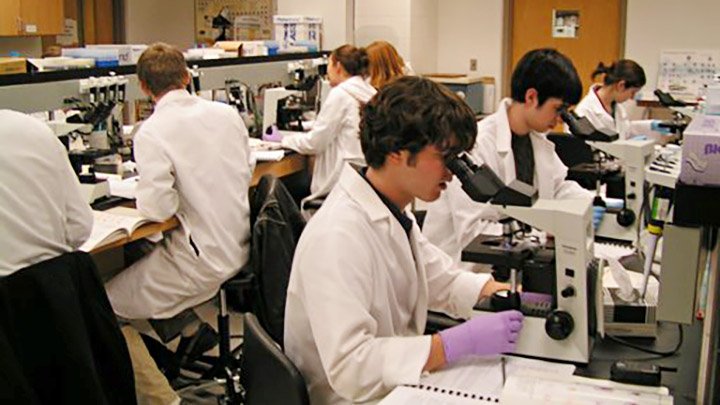 This year, four Calvin pre-med students have scored in the 99th and 100th percentiles on the Medical College Admission Test (MCAT), with scores equal to or higher than 99 to 100% of their peers across the country.

“I haven’t seen that happen, probably, for several decades, that this many students have got[ten these high of scores]” observed Kumar Sinniah, a professor of chemistry and biochemistry at Calvin since 1995. “Typically, in a given year, we might have maybe one or two students in the 90 to 100th-percentile range.”

Sinniah knows all four students, having taught a class with the four, and has done research with two of them in the past. All of the students have done research while at Calvin.

Sinniah views the college’s many undergraduate research opportunities as one of its major draws for prospective students, and a means by which students are able to go beyond typical academic expectations: “the research experience really gives them confidence, confidence in their own abilities, [and enhances] their ability to critically think about a problem.”

A well-rounded approach to education

Professor Teri Crumb, Calvin’s pre-health professions advising coordinator, was similarly impressed by the students’ 2018 MCAT scores, and shared that Calvin’s average MCAT score from 2015 to 2017 is in the 73rd percentile.

“I feel like some of our students deserve capes,” Crumb joked; “I think that’s truly the success of our MCAT scores: hardworking, dedicated students who are in the rigor [of Calvin’s science courses].”

Crumb holds that the pre-professional health program’s strength also stems from its emphasis on students gaining clinical, research, and leadership experience, as increasingly, she noted, “[medical schools] are looking for physicians-to-be that are passionate about medicine, and have empathy, and have the ability to communicate to other people.”

One of the high-scoring students, who asked to remain anonymous, said “I’ve done research at Calvin for two years, and that experience has been indispensable in terms of getting me to think like a scientist and helping me to develop self-discipline and patience. I’ve been able to help write a couple of scientific papers as well, which has been very exciting and helpful for my application.”

“I could hardly believe my eyes!” said Sam VanderGriend, another of the students, “I immediately called my parents to debrief. We were all shocked, but it was a very happy moment, too.” VanderGriend is currently working at a hospital in Washington, and hopes to attend medical school at the University of Washington next year.

He attributes his success largely to Calvin’s faculty and the strength of the science division’s various departments and interdisciplinary approach. “Without such a well-rounded academic background at Calvin, I am sure I would not have done as well on the MCAT.”