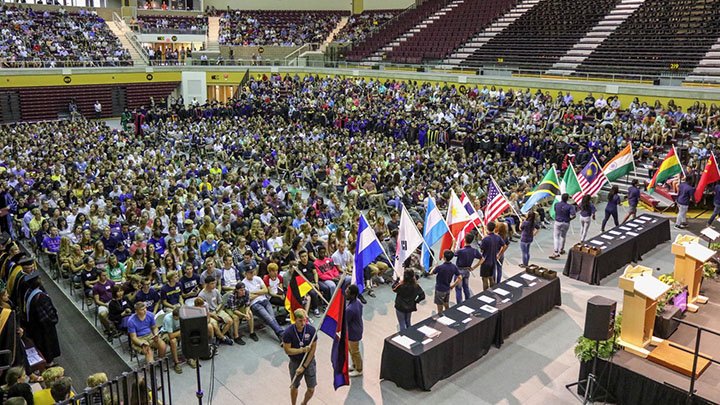 In fall 2017, nearly 42 percent of students earned a spot on the Dean's List.

Calvin College received the #1 ranking in the Regional Colleges Midwest category in U.S. News & World Report’s Best Colleges Guidebook. The college was also included in places like Princeton Review’s The Best 382 Colleges, the Fiske Guide to Colleges and America’s Top Colleges published by Forbes, to name a few.

Calvin continues to be viewed as a global institution as well. In the most recent Open Doors Report, which is published by the Institute of International Education, Calvin ranked in the top five among all baccalaureate institutions for both the total number of international students studying at Calvin, and for the total number of students who participate in a study abroad experience. That study abroad happens on six different continents and in more than 30 different countries, where students explore everything from education in Zambia to business as mission in India to issues of justice in Honduras.

In all things, Calvin remains committed to its mission of equipping students to think deeply, to act justly, and to live wholeheartedly as Christ’s agents of renewal in the world. The college prepares students for not only their first job out of college, but also for a lifetime of success and service. And the college’s new innovative Calvin LifeWork program further bolsters that claim. The incentivized, four-year, co-curricular program helps students prepare for life and work after graduation. In a recent survey, 99 percent of Calvin grads reported that they have either secured a job or begun graduate school within nine months of graduation.

Established in 1876 in Grand Rapids, Michigan, Calvin has a 2017-2018 enrollment of 3,840 students, representing almost every U.S. state, many Canadian provinces and 60 other countries from around the globe. Forty-two percent of the student body achieved Dean’s List status during the fall semester.

To request a zip code listing of all of the students at Calvin College who were named to the fall 2017 Dean’s List, please contact Matt Kucinski, assistant director of media relations at Calvin College at msk23@calvin.edu or 616-526-8935. Included for each student is his or her year at Calvin, major and high school. You might like to peruse the zip codes included in your circulation area and include this honor in one of your upcoming issues.