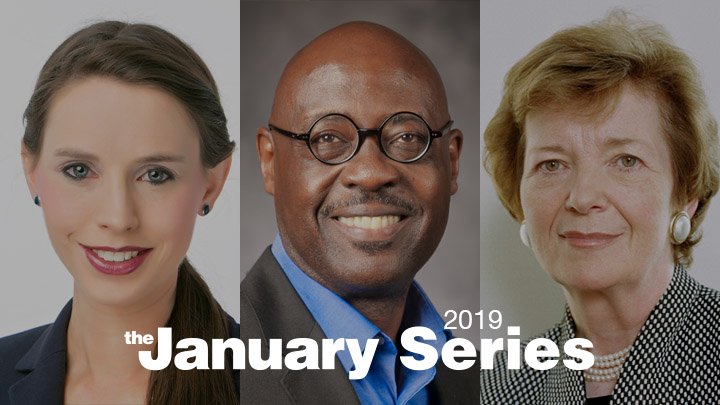 The 2019 edition of Calvin College’s award-winning January Series features a New York Times best-selling author, a two-time Pulitzer Prize-winning journalist, and a costume designer who has been nominated for multiple Oscars and Emmys. The series also welcomes a former president of Ireland, an astronaut, and the whistleblower in the Larry Nassar case.

From Wednesday, Jan. 3 through Tuesday, Jan. 23, 2019, attendees will learn from a wide range of experts leading some of the nation and world’s most pivotal and timely conversations. The 15 speakers will provide insight on issues like polarization in politics, immigration, race and America, sexual abuse, and climate justice, among many others.

“What I love about our audience each year is they come wanting to learn, wanting to be better global citizens. And they are willing to listen to some new ideas and consider them, and then find ways to act on what they’ve heard,” said Kristi Potter, director of the January Series. “And what they can trust the series to deliver are speakers who have really thought through their material and are trying to make the world a better place by what they are studying, what they are doing, what they are researching and talking about.”

Rachael Denhollander, an advocate and educator who became known internationally as the first woman to file a police report and speak publicly against Larry Nassar, is one of the featured presenters. This year, she was named one of TIME Magazine’s 100 Most Influential People in the World.

Mary Robinson, president of Ireland from 1990-1997, is also in the lineup. She is widely regarded as a groundbreaking and transformational leader who elevated the public role of the Irish presidency, helping to shape modern Ireland in a period of rapid and unprecedented economic growth. Following her tenure as president, Robinson went on to serve as the U.N. High Commissioner for Human Rights.

Nicholas Kristof, a columnist for the New York Times and winner of two Pulitzer Prizes in his 30 years of covering the world, and Barbara Pierce Bush, co-founder of Global Health Corps, co-author of Sisters First: Stories from Our Wild and Wonderful Life, and daughter of former U.S. President George W. Bush, are also in the 2019 lineup.

Potter says the January Series exists to cultivate deep thinking and conversations around the important issues of the day in an effort to inspire cultural renewal and shape global citizens.

“I want people to be smarter when they leave, to learn something new they didn’t necessarily know before, to gain deeper perspectives,” said Potter. “And we are ultimately gathering to think about how we make the world a more just place and to consider what steps we need to take in that pursuit.”

The January Series runs from 12:30 p.m. to 1:30 p.m. EST Monday through Friday in the Covenant Fine Arts Center on Calvin’s campus. And, the series is also available in more than 50 cities throughout the United States, Canada, and Europe. In 2018, nearly 80,000 people enjoyed the series live between on-campus, remote sites, and audio livestream.

To request an interview with Kristi Potter or hi-res photos of the speakers, contact Matt Kucinski at 616-307-7429 or msk23@calvin.edu.

Jennings is an associate professor of systematic theology and Africana studies at Yale University.