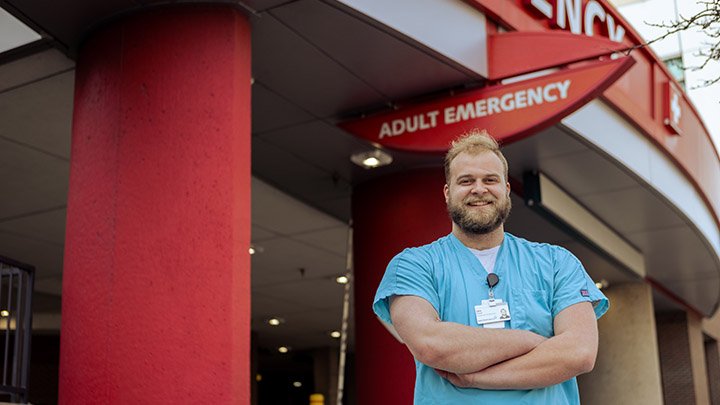 “I will be the poster child for a liberal arts education any day of the week,” said Christopher Visser with a laugh.

When talking to Visser, a fifth-year senior from Fremont, Michigan, it does not take long to understand why he would gladly agree to that. A classics and biochemistry double major, Division III track and field athlete, and soon-to-be medical student, Visser has fully experienced what Calvin’s liberal arts education has to offer.

“I still feel like a stranger in the science building. I’m a humanities major at heart.”

In high school, Visser found himself fascinated by his church history class, often reading his textbook for fun. When he entered his freshman year at Calvin, he immediately declared a double major in classics and philosophy with the goal of becoming a professor. He loved studying the ancient church and dove into learning Greek and Latin, even translating two books of The Iliad on his own during an interim.

“In the middle ages, the church struggled with a lot of corruption—it doesn’t seem like it should have survived,” explained Visser. “I love studying how the church grew through that and somehow survived with God’s hands on it, even though we did our best to screw it up.”

After taking a step back from his classics and philosophy courses during a study abroad program in Budapest, Hungary, Visser started to see that a career in academia might not be the right fit for him. Then, Visser thought back to a previous elbow injury and remembered his fascination with the rehab process. Having grown up with a mother and grandfather who practiced medicine, Visser started thinking about what that could look like for him.

“Once I studied the science of the body, I wanted to go deeper. I wanted to get into the biochemistry of it,” said Visser. “What exactly is going on in cells? How do proteins work? So, once I got interested in it, I started thinking that maybe I can actually do this.”

Visser reached out to a few of his mentors and started figuring out how to navigate the pre-med program while staying true to himself. With the help of classics professor David Noe, chemistry professor Chad Tatko, and pre-med advisor Teri Crumb, Visser decided upon a biochemistry and classics double major.

“Chris did not come to Calvin as a finished product,” said Tatko. “He was on a path, and it was winding but necessary. He found out that there were a lot of things he could do, but the thing that made the most sense—that was medicine. What I take from Chris is the hard work he put in to know himself and his place.”

“I could not have done this anywhere else but Calvin,” said Visser. “I really feel like all my advisors really advocated for me well and helped guide me to make this weird biochemistry and classical double major work.”

“I started by wanting to understand the human condition.”

Visser credits his classics major with helping him learn to think better, teaching him to trust that he can work through difficult problems, and making him a richer person overall.

“There’s a certain kind of humor and self-effacement that studying the classics cultivates,” said Professor Noe. “You take your discipline seriously. It’s a trust of information and tradition thousands of years old, but you don’t take yourself seriously because you say that ultimately, you’re not that important. You are a link in the chain and need to be a reliable link. I have the privilege of helping students like Chris learn to do something old and useless—the beautiful, true, and delightful—while they also pursue something more contemporary and useful like medicine.”

As Visser explains, “for me, the doorway into medicine was that I started by wanting to understand the human condition, and then I learned that I really loved learning the physical part as well. This is opposed to someone really interested in science, and then they have to breach into the holistic idea of a human. I’m definitely glad that I started in humanities and stumbled into medicine.”

Visser has been gaining real-life experience as a scribe at the downtown emergency room in Grand Rapids, where he works directly with doctors and physician assistants. This fall, he will be attending Michigan State’s medical school with a plan to focus on emergency medicine in his residency. Visser will also pursue a specialization that allows him to work with sick patients in the ICU.

Throughout his life, Visser has never been a person to run away from tough situations. “I’ve always felt pretty comfortable operating in heavy, sad, emotional circumstances in terms of comforting and explaining difficult things to emotional people. That’s something I attribute largely to going through rough stuff in my own life and working with the Lord,” says Visser. “I think of the book, Lament for a Son, that shows that God is sad with you. God is a God that will mourn with you. That’s an aspect of my faith that I will need to harness a lot in my future in medicine.”