The man behind the name

Born July 10, 1509 in Noyon, France, Jean Calvin was raised in a staunch Roman Catholic family. The local bishop employed Calvin’s father as an administrator in the town’s cathedral. The father, in turn, wanted John to become a priest. Because of close ties with the bishop and his noble family, John’s playmates and classmates in Noyon (and later in Paris) were aristocratic and culturally influential in his early life. 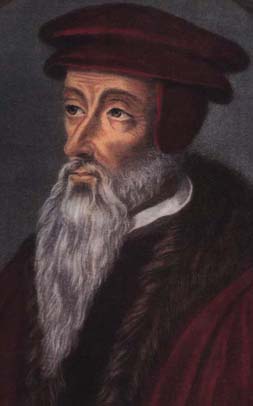 At the age of 14, Calvin went to Paris to study at the College de Marche in preparation for university study. His studies consisted of seven subjects: grammar, rhetoric, logic, arithmetic, geometry, astronomy, and music. Toward the end of 1523, Calvin transferred to the more famous College Montaigu. While in Paris he changed his name to its Latin form, Ioannis Calvinus, which in French became Jean Calvin. During this time, Calvin’s education was paid for in part by income from a couple of small parishes. So although the new theological teachings of individuals like Luther and Jacques Lefevre d’Etaples were spreading throughout Paris, Calvin was closely tied to the Roman Church. However, by 1527, Calvin had developed friendships with individuals who were reform-minded. These contacts set the stage for Calvin’s eventual switch to the Reformed faith. Also, at this time Calvin’s father advised him to study law rather than theology.

By 1528, Calvin moved to Orleans to study civil law. The following years found Calvin studying in various places and under various scholars, as he received a humanist education. By 1532, Calvin finished his law studies and also published his first book, a commentary on De Clementia by the Roman philosopher, Seneca. The following year Calvin fled Paris because of contacts with individuals who through lectures and writings opposed the Roman Catholic Church. It is thought that in 1533, Calvin experienced the sudden and unexpected conversion that he writes about in his foreword to his commentary on the Psalms.

For the next three years, Calvin lived in various places outside of France under various names. He studied on his own, preached, and began work on his first edition of the Institutes—an instant best seller. By 1536, Calvin had disengaged himself from the Roman Catholic Church and made plans to permanently leave France and go to Strasbourg. However, war had broken out between Francis I and Charles V, so Calvin decided to make a one-night detour to Geneva.

But Calvin’s fame in Geneva preceded him. Farel, a local reformer, invited him to stay in Geneva and threatened him with God’s anger if he did not. Thus began a long, difficult, yet ultimately fruitful relationship with that city. He began as a lecturer and preacher, but by 1538 was asked to leave because of theological conflicts. He went to Strasbourg until 1541. His stay there as a pastor to French refugees was so peaceful and happy that when in 1541 the Council of Geneva requested that he return to Geneva, he was emotionally torn. He wanted to stay in Strasbourg but felt a responsibility to return to Geneva. He did so and remained in Geneva until his death May 27, 1564. Those years were filled with lecturing, preaching, and the writing of commentaries, treatises, and various editions of the Institutes of the Christian Religion.

We recommend these additional reads for those interested in the life and work of John Calvin.

The Unaccommodated Calvin: Studies in the Foundation of a Theological Tradition
By Richard A. Muller.
New York, NY: Oxford University Press, 2000

The Servetus Controversy
The execution of Michael Servetus in 1553, Geneva, Switzerland.