When research on the water turns to gold 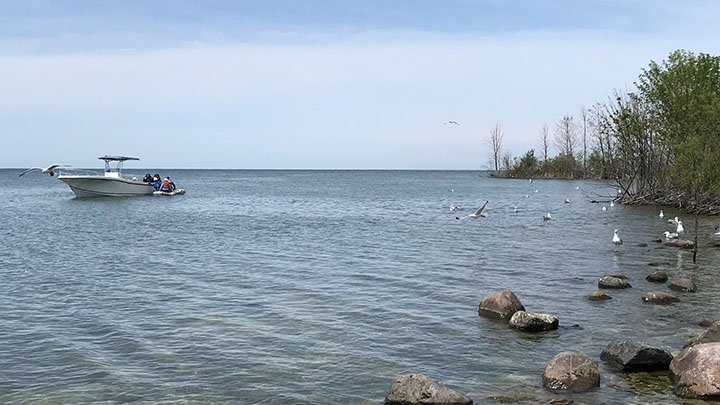 When Laura Dykstra was finishing up high school, she had research on her mind. Dykstra, from West Chester, Ohio, saw opportunity just a few hours to the north.

“There are a lot of diverse ecosystems and wildlife species in Michigan and the Great Lakes area, and I thought it would be great to study them in person,” said Dykstra.

So, she visited some schools, looking for an opportunity to get started.

Calvin was one of her stops.

“I was impressed by all of the research opportunities at Calvin – even freshmen are able to get involved in the lab or in the field,” said Dykstra.

It didn’t take Dykstra long to realize the unique opportunity she would have at Calvin to pursue her dream. So, she chose Calvin, and with the help of her professors she was plugged into research right away.

“One of the greatest things about Calvin is how much the professors are invested in their students; I feel like I’ve gotten to know my professors well and that they care about my career goals,” said Dykstra, a biology major.

In the lab, in the field

Along with two other undergraduate students, Dykstra is working in biology professor Keith Grasman’s lab. They are monitoring the impact of environmental contaminants on the health of Great Lakes colonial waterbirds.

Following World War II, industrial and agricultural activity introduced high concentrations of pollutants into the Great Lakes ecosystem. These chemicals persist in the environment and bioaccumulate in organisms at higher trophic levels, including fish-eating birds. Since contaminants are associated with poor reproduction, reduced chick survival, immune suppression, and deformities in fish-eating birds, gulls and terns are effective indicators of contamination in the Great Lakes.

“In the summer, we travel to herring gull and Caspian tern colonies at contaminated sites in Michigan, including Saginaw Bay, Grand Traverse Bay, and the River Raisin in Monroe,” said Dykstra. “At the colonies, we measure egg size, embryo viability, nest productivity, chick growth, and chick immune function.

“I appreciate that I’m involved in every aspect of the research: preparing for fieldwork, collecting data, and analyzing that data,” said Dykstra. “That’s a unique experience for an undergrad to have.”

Dykstra’s experiences at Calvin have led to some important discoveries.

“Our research has found that chicks at contaminated colonies continue to show reproductive, growth, and immunological impairments, which informs U.S. Fish & Wildlife remediation efforts at these sites.”

And these discoveries have led to bigger platform

Dykstra, in her third year at Calvin, has already presented posters at the Society of Environmental Toxicology and Chemistry’s North America Meetings in 2018 in Sacramento, California, and in 2019 in Toronto, Canada.

She also works with a group studying suburban red-shouldered hawks and recently published an article in the Journal of Raptor Research titled “Red-Shouldered Hawks Banded in Suburban Southern Ohio, 1996-2018.” And she has another submitted paper that is still under review.

These experiences have set Dykstra up for her crowning achievement at Calvin. In late March, Dykstra was awarded a Goldwater Scholarship—widely considered the top research award for undergraduate students in the sciences. Only 396 college students across the United States received this honor in 2020-2021. The scholarship, a partnership between the Barry Goldwater Scholarship and Excellence in Education Foundation and the Department of Defense National Defense Education Programs, comes with a $7,500 scholarship to support students in their research journeys.

“The Goldwater opens up opportunities for studying in the future,” said Dykstra.

For Dykstra, that means more opportunities to do what she loves: research!

And with the research experience she has had at Calvin, and the prestigious Goldwater honor, she should have her pick at where she wants to go to graduate school to study Wildlife Ecology.

“I’m most interested in wildlife conservation, I’m hoping to work in academia or in a government agency,” said Dykstra. “I’m interested in how anthropogenic activity affects wildlife, and how our work can influence policies that protect the environment and human health.” 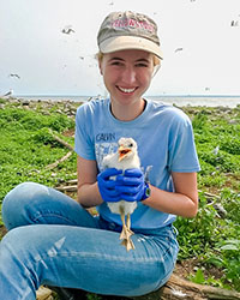