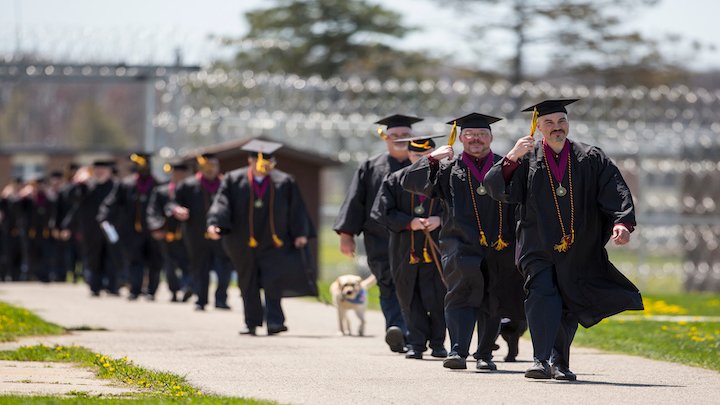 Calvin University held its first official graduation inside prison walls on May 9, 2022. "Officials say its the first bachelor's degree ceremony inside an active prison in modern history." (Detroit Free Press).

On Tuesday, August 30, James Kvaal, the Under Secretary of the U.S. Department of Education (ED), and three additional high-level staffers will be visiting west Michigan. The group will visit Handlon Correctional Facility (Ionia, Mich.) to check out the Calvin Prison Initiative (CPI) program. This will be Kvaal’s first prison visit as Under Secretary of the department.

Kvaal’s office oversees higher education; career, technical and adult education; and federal student aid—all three areas covered by CPI. Kvaal and his office are interested in how Second Chance Pell grants have impacted the program as the ED is reinstating Pell eligibility for prisoners in 2023.

State Senator Mark Huizenga, State Representative Rachel Hood, Michigan Department of Corrections (MDOC) Director Heidi Washington, Calvin University President Wiebe Boer, Calvin Theological Seminary President Julius Medenblik, and prison education leaders, will join Kvaal and other ED leaders at Handlon for a half day visit that will include touring facilities and classroom spaces, talking with students in the program, and participating in roundtable discussions around topics important to the ED. The visit is hosted by the Calvin University, Council for Christian Colleges & Universities (CCCU), and MDOC.

“The CCCU is so proud of the work of the Calvin Prison Initiative. It was a flagship and has captured the essence of how education is a service to others. God sees every individual as his son or daughter. The dignity of humankind is uplifted when individuals demonstrate resilience and persistence,” said CCCU President Shirley Hoogstra. “The fact that Calvin University, a CCCU institution, can provide a life-changing experience for so many speaks to the life-changing mission of the university. The CCCU is so grateful to Under Secretary Kvaal to take the time to visit the program that exemplifies many of the goals of the Department of Education, which is for all individuals. We appreciate the Administration’s commitment to Second Chance Pell and to students in correctional facilities.”

Now, entering its 8th year, the CPI program, a partnership between Calvin University, Calvin Theological Seminary, and MDOC, has become a statewide and national model for prison education. The five-year program culminates with inmates, mostly lifers, earning a bachelor-of-arts degree in faith and community leadership. In May 2022, the first three cohorts of inmates, 45 students in all, received their bachelor’s degrees in a “first of its kind” Commencement ceremony inside prison walls. The goal of the program is to contribute to both individual moral formation and the prison community’s reformation.

The CPI program has clearly contributed to the moral formation of the students, which is evidenced in individual story after story. But, it’s also seen in the reformation of the culture at Handlon, which was once referred to by inmates as “Gladiator School,” for its reputation for violence. Since the program started in 2015, violent incidents have decreased significantly.

Another marker of success is the unprecedented recidivism rates. The national average is 43%, which means nearly half of offenders who are released from prison will return within three years. To date, 14 inmates who began in the CPI program have been paroled—all 14 have not only remained out of prison, but are gainfully employed, many working for renewal in areas where they once caused harm.

“My story is one of the power of community in shaping someone. Until you realize that need and how great that need is, you aren’t even aware of it,” said Michael Duthler, a 2020 graduate of the program who was paroled and now works for a nonprofit that helps returning citizens with recovery and reentry into society. “Through my journey, God showed me that he is bigger than my mess, bigger than my pain. Where I was once an agent of destruction who didn’t care about anyone but myself, now my education forms me as an agent of renewal.”

The original vision of the CPI program is now becoming a reality. This summer, teams of 5-10 graduates have been transferred to other prisons throughout the state to provide leadership for academic, peer mentoring, and ministry programs.

Founded in 1876, Calvin University is a top-ranked, liberal arts institution that equips its more than 3,200 students from 48 U.S. states, 55 countries, and five Canadian provinces to think deeply, to act justly, and to live wholeheartedly as Christ’s agents of renewal in the world. Calvin offers 100+ majors and programs, including a growing portfolio of graduate-level offerings. Calvin students engage in intensive internships, community-based service learning, and significant research that results in publishing and presenting alongside world-class faculty. The university’s 400-acre campus is in the vibrant city of Grand Rapids, Michigan. Discover more at calvin.edu.

About Council for Christian Colleges & Universities

The Council for Christian Colleges & Universities is a higher education association of more than 185 Christian institutions around the world. Since 1976, the CCCU has served as the leading national voice of Christian higher education. With campuses across the globe, including more than 150 in the U.S. and Canada and more than 30 from an additional 19 countries, CCCU institutions are accredited, comprehensive colleges and universities whose missions are Christ-centered and rooted in the historic Christian faith. Most also have curricula rooted in the arts and sciences. The CCCU’s mission is to advance the cause of Christ-centered higher education and to help our institutions transform lives by faithfully relating scholarship and service to biblical truth.

Learn more about the CPI program

Understand the journey from an idea to reality

Discover the impact in story-after-story of transformation