When A Community Shapes You 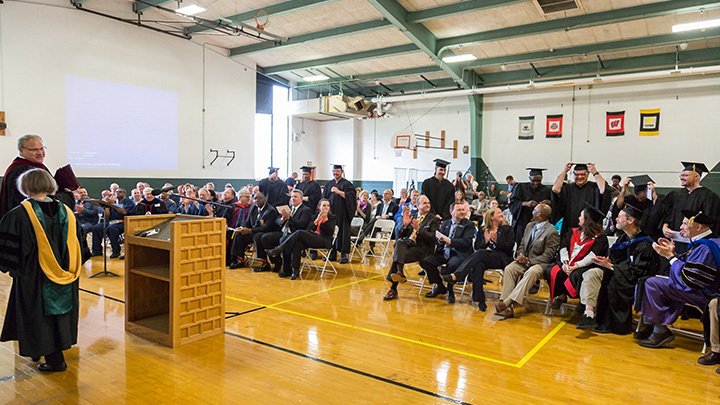 Students in the Calvin Prison Initiative are surrounded by members of Calvin University, Calvin Theological Seminary, and MDOC at the 2018 Convocation ceremony at Handlon Correctional Facility.

In 1992, police officers were staking out Michael’s home.

Bill Corner, at the time a member of the local police department, was one of the officers waiting to apprehend Michael, who would be sentenced to life in prison for second-degree murder. The two’s paths would cross again almost 30 years later.

“I was heartbroken the night of my crime. I broke a lot of hearts, people were deeply impacted,” said Michael. “I couldn’t believe I had ended a life. My humanity ended the moment I ceased esteeming another’s.”

“Hours after he committed the crime, he realized he threw his life away,” said Todd Cioffi, director of the Calvin Prison Initiative.

“My only way to deal with taking another’s life was through God’s mercy and grace,” said Michael.

Michael admits to growing up in a Christian home, with a mom who he describes as a bulwark of faith, as someone who carefully planted seeds in his life, seeds that were still there, but had not taken root.

“When he went to prison, he hit the gate wondering ‘okay what do I do? He was on a path of understanding I’m not this person, I’ve got to get this right,” said Cioffi.

Unfortunately for Michael, the soil inside the prison fences was hard, and any support system he had was seemingly gone. This was the environment where he would wrestle day-after-day with his destructive, life-altering decision.

“I wrestled with that over the years, through that lens of faith, the fact that God’s mercy and love is greater than my sin,” said Michael. “It’s a truth I needed to grow into.

“In prison, you’re living in a fishbowl of people who have done deplorable things, myself included, and you can’t get away from them, some of them are unrepentant for what they did. One of the hardest things for me is knowing the light hasn’t turned on for these guys, and then seeing them go back into society and coming right back to prison.”

“Here’s a guy who wants to become rehabilitated, you don’t have to convince him of it,” said Cioffi, “and yet, the prison setting has so little to offer, so he’s grabbing at anything they’ll give him.”

So Michael got to work. He was committed to becoming the best version of himself. And he soon knew part of that calling was so he could help his fellow inmates to do the same.

“I was present to these people in their suffering, in their mess, amidst their hurt,” said Michael of his fellow inmates. “This was my calling.”

And Michael’s pursuit of this calling was met with opportunities. He learned several vocational trades, took every unaccredited class he could find, learned how to speak Spanish and how to interpret sign language—building up his understanding and helping to remove barriers so he could care well for those around him.

“I thought perhaps the reason some of my fellow inmates were unrepentant about what they’d done is they hadn’t figured out how to deal with it,” said Michael. “My only way to deal with it was through God’s mercy and grace. I was someone they could speak with. I listened to them, asked questions that helped me gain perspective, and I offered perspective that allowed them to understand God’s grace and mercy.”

“It was an awesome opportunity,” said Michael. “I thought ‘this is just amazing.’”

Michael was admitted into the first cohort of the Calvin Prison Initiative at Handlon Correctional Facility in Ionia, Michigan. Even though he was serving a life sentence, through this program, he’d have the opportunity to earn a bachelor’s degree behind bars.

“In our Developing a Christian Mind Class, Professor Cioffi talked about this upside-down worldview – how God does that … how the least shall be the greatest,” said Michael. “I felt among the least. Though I had no meaningful chance of getting out as far as society was concerned, being given this opportunity fit with that narrative.”

Three years into the five-year program at Handlon Correctional Facility, Michael and the inaugural CPI cohort would earn associate degrees, with a ceremony being held to honor their achievement. While earning the degree served as a significant milestone, it was what Michael saw that day that meant the most.

“I was surrounded by every professor I had from that point,” said Michael. “You want to talk about the power of community that comes through. We are communal beings, we find and form identity within community, and that was rich and robust in the CPI program. And then at any milestone moment, we’d have just an incredible number of staff show up in academic regalia, giving us a sense of dignity, value, and worth for who we are. We’d have donors and staff come and celebrate with us. There are layers to this community that formed and shaped me, helped me gain a richer understanding of who I was. I am a son of God, accepted son of God, this wild shoot grafted on to this living vine – to belong to this community of Christ-hearted, Christ-loving people.”

And Michael found out just weeks prior that he would be physically much closer to this community. Twenty-six years after he stepped inside prison walls, he would take his first steps out.

“I was in a state of shock. I’m in a dream. The reality was too big for me to process as I was walking out the door,” said Michael.

His family and close friends, including a family who had walked alongside him for decades while he was behind bars, were there to greet him and to take him out to breakfast. It was a prodigal son moment.

“I couldn’t have had a softer landing, full wardrobe, a car, appliances that I’d need, bath towels, boots, winter coat, I even had a phone handed to me,” said Michael.

“When I showed up to Spoelhof Center, the Calvin community was there to greet me,” said Michael. “It was this continuity of identity.”

And one of the first people he’d see on the main campus was one of the last people he saw when he was a free man 26 years prior: Bill Corner, now the director of campus safety at Calvin University. The officer who had been pursuing Michael for his crime, was now pursuing him as a mentor.

“There’s always that fear that I’m going to be judged for the worst thing I’ve done, and I have sympathy for those who can’t get past that, but when people can relate to who I am versus who I was, that is so affirming.”

Michael sees Corner as both a mentor and friend. He’s someone he’s shared family meals with, received guidance from in encountering people from his past, and talked to about everything from sports to recently listened to sermons.

“He’s been a constant presence in my life,” said Michael. “I’m so grateful for all the Bill Corners of this world.”

And in his experience, there are a number of “Bill Corners” on Calvin’s Knollcrest campus in Grand Rapids, Michigan, where he completed his bachelor’s degree in May 2020.

“These people are on fire, they love God, they are not doing this for a paycheck, they really love what they are doing,” said Michael. “What I saw at Handlon was supersized on the main campus. It didn’t matter when or where or how; you can catch a professor so easily to have encounters and conversations. Having a PhD professor relating to you as a fellow human being, to give that to a person, like myself, whose humanity has been suppressed throughout prison, you put me in this nutrient-rich environment, I can’t help but grow.”

Michael is grateful for the many layers of community that have walked alongside him on his journey, including Calvin University and Calvin Theological Seminary faculty, staff, students, and donors, a church congregation, family and friends, and many others. With that continued support, he is passionately living out his calling.

Through his internship in the social work program at Calvin, Michael was connected with a faith-based nonprofit that assists returning citizens with recovery and reentry. Today, he has his bachelor's degree in social work, and works there full-time as a reentry and recovery coach.

“My story is one of the power of community in shaping someone. Until you realize that need and how great that need is, you aren’t even aware of it,” said Michael. “Through my journey, God showed me that he is bigger than my mess, bigger than my pain. Where I was once an agent of destruction who didn’t care about anyone but myself, now my education forms me as an agent of renewal.”