Supporting the next wave of intellectual discovery at Calvin College 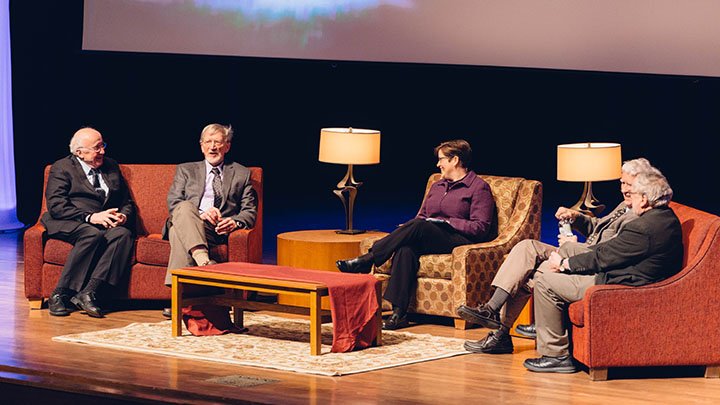 For more than 50 years, Alvin Plantinga ’54 has been making an intellectual imprint on the field of philosophy. In 2017, he was awarded the Templeton Prize for his life’s work. And with it, came a $1.4 million prize.

Now, Plantinga is donating nearly half of those winnings to what he considers his intellectual home: Calvin College. The funds will be used to support the work of an intellectual community that provided him—as both an undergraduate student and a faculty member—with the space to ask challenging questions and explore new ground in his field, leading to a flurry of impactful discoveries.

Plantinga, who left Harvard to study at Calvin College in the 1950s, values Calvin as a place where faculty and students have the freedom to integrate their faith and learning. And so the bulk of the funds he’s donated to his alma mater will work to advance the college’s thought leadership in the academy and the broader world through faculty research and student scholarships.

“Plantinga is an intellectual giant, and at Calvin he walked among other giants of Christian academia. His generation modeled the kinds of teamwork and mutual support that allow Christian scholars to thrive,” said Matt Walhout, dean for research and scholarship at Calvin College. “Calvin honors their legacy by continuing to invest in world-class faculty scholarship.”

“The Reformed tradition has always valued and championed the life of the mind as a way to glorify God. Calvin College’s holistic faith-integration model of scholarship is both intellectually fruitful and culturally winsome,” said Rebecca Konyndyk DeYoung, professor of philosophy at Calvin College. “The church needs good scholars and thoughtful members, and Calvin College encourages its faculty to use their professional expertise to bear on issues important to churches and communities of faith … Calvin has held in balance that commitment to academic excellence and that robust faith-engagement. It’s hard to keep those two things together, but here it is part of our DNA.”

“Calvin hires faculty who are experts and potential world-changers. We want them to continue with their professional work, and we hope they will “bring their work to church” in the sense of helping other Christians understand its importance. That way, our students get a cutting-edge education in their major fields, but they also get to see how their specialties fit into a much bigger picture,” said Walhout. “This integrated approach can make a Calvin education pretty exciting for students and faculty alike.”

It’s an approach that excited Alvin Plantinga enough back in the 1950s for him to leave Harvard to study at Calvin. And then later to return to teach at his alma mater for nearly 20 years. And the fruit of that decision is seen 50 years later through the dozens of rigorous writings that have revolutionized the field of philosophy.

One philosopher who nominated Plantinga for the Templeton Prize wrote: “Alvin Plantinga’s intellectual discoveries have initiated novel inquiry into spiritual dimensions. His precise and carefully developed insights have opened up intellectual-spiritual space. In the 1950s there was not a single published defense of religious belief by a prominent philosopher; by the 1990s there were literally hundreds of books and articles … defending and developing the spiritual dimension. The difference between 1950 and 1990 is, quite simply, Alvin Plantinga.”

A commitment to intellectual discovery

While the significance of Plantinga’s work cannot be overstated, it is also not an outlying exception at Calvin. Part of that is no doubt thanks to scholars like Plantinga whose work has proven the value of Calvin faculty leading important intellectual conversations in many fields.

“The types of research projects and publications that the faculty now pursue were made possible by the pioneering work Al did to make Christian scholarship professionally credible,” said DeYoung. “We can now be explicit about how our faith infuses and catalyzes our thinking and our cultural engagement—whether that’s in the areas of healthcare policy, food and animal ethics, gender and disability advocacy, urban planning and design, studies of consciousness, or Christian virtues and spiritual practices, to name only a few of the areas in which the philosophy department faculty are currently contributing to cultural and scholarly conversations.”