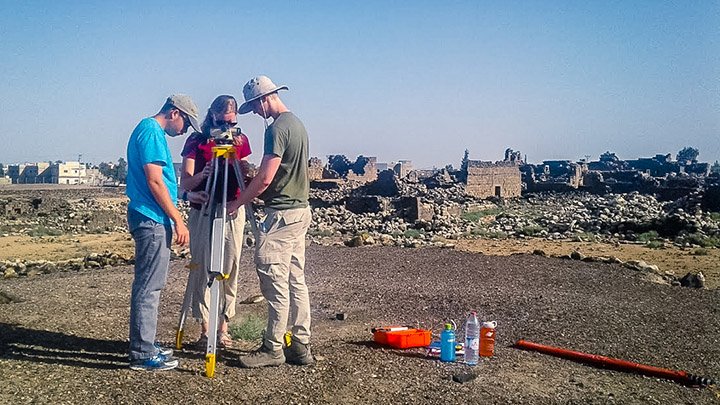 In the Jordanian village of  Umm el-Jimal, Calvin senior Sarah Cok—working through the Clean Water Institute of Calvin College (CWICC) and the Umm el-Jimal Project alongside Jordanian experts and community members—participated in a millennium-old engineering project.

Cok started at Calvin in engineering, but switched to an interdisciplinary major last fall, where she was able to combine her interests in civil-environmental engineering, environmental studies, and art history.

“When I told [engineering] professor [David] Wunder about that,” Cok said, “he was like, ‘Have you heard about this project? I think you’d be great for it.’” Wunder, who is director of CWICC, noted that Cok was “tailor made for the work.”

An ancient answer to a contemporary problem

The village of Umm el-Jimal “has seen five or six waves of civilization,” said Wunder. Local Arab residents under successive Nabataean, Roman, Byzantine, and Islamic regimes built an extensive system of channels and reservoirs, which expanded as the town grew. By the twentieth century, much of the village’s water system was filled in with sediment, although inhabitants still relied on the functioning sections for water until the 1970s.

According to Cok, the modern Umm el-Jimal community now primarily relies on deep wells for water, but recently the wells’ aquifers have begun to dry up, forcing villagers to drill deeper.

Due to the Umm el-Jimal community’s need for an additional source of water, Calvin emeritus professor of archaeology Bert de Vries—who has been working in Jordan for more than four decades—contacted CWICC two years ago about reactivating the ancient water system.

With Wunder’s encouragement, Cok applied to travel to Jordan and work with CWICC on the project, helping to assess the feasibility of restoring the system and to draw up designs to meet the needs of the Umm el-Jimal community.

A vision in harmony with history

When she arrived in June, she found that the team was living in the village sheikh’s old house. The house had “a big room where the girls slept, a big room where the guys slept, and then Bert de Vries had his own room with his wife,” said Cok; “There was also our big office space, which had giant ceiling fans, thank the Lord.

“The team members were all from different disciplines, which was really cool” Cok added, “I sat across the table from an anthropologist, a pottery specialist, Bert [de Vries, who is an archaeologist,] and a business professor.”

Cok alternated between office work, drawing up designs and writing reports; and working on-site, documenting existing channel conditions, carrying out a site elevation survey, and mapping locations for new channels. She also spent much of her time researching the appearances of both the ancient and currently functioning channels.

“It’s really important that [the new designs] are not copying the old ones, you want to be clear that you’re not trying to fake that they’re history,” said Cok. “But you also need [the new designs] to be in harmony with the history, which sounds kind of flakey and weird, but is a super important part of this project.

“A  lot of my role was to be an engineer, but be an engineer with respect towards preservation and site integrity,” she added; “So I drew up a bunch of different suggestions for what our channels could look like, and they pulled things from all these different designs while still looking clearly new and using [local] materials.”

Working towards a sustainable future

The community of Umm el-Jimal, according to Cok, is highly supportive of the project; both the mayor and the municipal engineers offered the team their assistance.

She noted that community members were also starting both an education initiative to “train teachers to teach students about sustainable water use, so that once we have all of the water system in place, people will be knowledgeable about how to best use and preserve it,” and a company to eventually oversee the Umm el-Jimal project.

“A big part of this is that it needs to be sustainable without third party people coming in; that’s just a development thing,” said Cok. “As cool as it is we all get to work on this, it should be the community’s.”

Since returning to the States, Cok has been working with Wunder on writing a scholarly paper about sensitive site design to help engineers be more effective at working in areas which are culturally, historically, and environmentally sensitive.

“Engineers, in my opinion, tend to overlook these things; if there’s a historic structure that they don't think will be useful to their purpose, they just get rid of it and build something new,” said Cok, who argues in the paper that restoring and maintaining older structures is more sustainable and allows the community to connect better with its heritage.

Although she’s enjoyed being back, Cok is effusive about Jordan: “The people in Jordan are amazing, they’re super hospitable, and I loved being there.

“I was invited to come back next summer, so we’ll see,” she said, laughing.