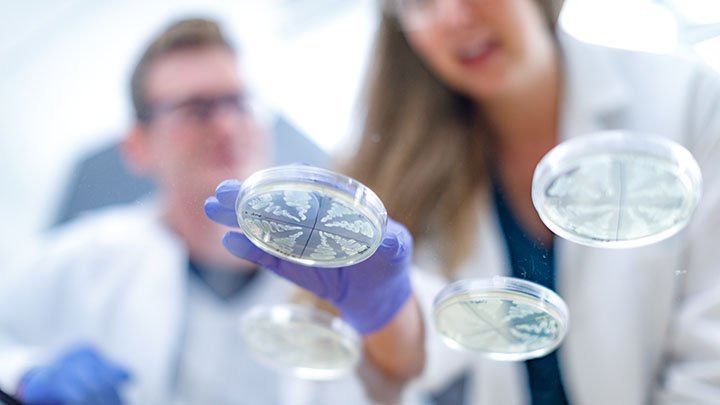 Since 2009, 20 Calvin students have been recognized as Goldwater Scholars and 14 have been named honorable mentions.

Two Calvin students have been named Goldwater Scholars for 2019-2020. Widely considered the top research award for undergraduate students, Calvin is the only private institution in Michigan to have multiple students receive the award.

Goldwater Scholars show a strong commitment to a research career in STEM, effective display of intellectual intensity in STEM, and potential for a significant future contribution to research in his/her chosen field.

Blain is studying variable stars alongside astronomy professor Larry Molnar, and her research experiences at Calvin have resulted in her co-authoring a pair of papers. Reese researches alongside biochemistry professors Amy Wilstermann and Rachael Baker. Their research focuses on rare diseases, which has resulted in Reese presenting at the 2017 Midwest Enzyme Conference, her assisting in the planning of the first-ever Rare Disease Symposium held in March 2018, and her co-authoring an article published in the American Journal of Medical Genetics.

Setting the gold standard for research

Calvin has been a national leader in producing Goldwater Scholars. Since 2009, 20 Calvin students have been recognized as Goldwater Scholars and 14 have been named honorable mentions. Student and faculty research at Calvin generates more than 125 publications annually.

“Our students have come to expect that they will receive the exemplary training and research that such a track record signifies. It encourages all of us to continue to do research that meets their expectations,” said Carolyn Anderson, a professor of chemistry at Calvin College and Calvin’s liaison with the Goldwater Scholar program.

In total, eleven students from Michigan colleges and universities were awarded Goldwater Scholarships in 2019.

The Goldwater Scholarship Program honoring Senator Barry Goldwater was designed to foster and encourage outstanding students to pursue careers in the fields of mathematics, the natural sciences, and engineering. The Goldwater Scholarship is the premier undergraduate award of its type in these fields. The one and two-year scholarships cover the cost of tuition, fees, books, and room and board up to a maximum of $7,500 per year.