No borders at Calvin University 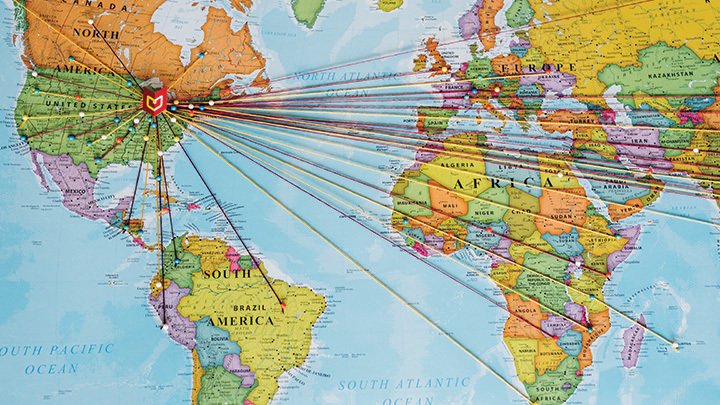 Students from more than 65 countries around the world come to Calvin University each year.

Misgana Sisay Dinberu, Omotoyosi Fasusi, and Eun Hyuk Doo all had dreams of pursuing a college degree in the United States.

Unfortunately for them and the more than one million international students who attend colleges and universities in the United States, the door to this dream seemingly closed this summer.

“I was in a position where I felt ready to go college,” said Fasusi, who is from Nigeria. “I was assigned a dorm, I had already met my roommate, but then the embassy got closed down.”

“I was depressed,” said Hyuk Doo, who is from South Korea. “I wanted to experience university life, meeting new people from around the world.”

“I thought I was going to have to defer my admission,” said Dinberu, who is from Ethiopia.

The trio was ready to come to Calvin University, an institution that draws more international students than almost any other university of its size. The population of international students at Calvin is above 13%, more than double the national average. So, when embassies were shut down and travel bans were put in place this past spring and summer, universities like Calvin had a choice to make: either accept that most of their international students would likely have to wait a semester or a full year to join their community or work to create a path for them.

“We would have done our students a disservice by making them wait a year to possibly be able to come in-person,” said Tara Braun, associate director of international admissions at Calvin University.

“In this cloud of uncertainty, we were able to collaboratively pull together an option,” said Sara Vander Bie, ESL instructor and academic counselor at Calvin University.

The option was the international online cohort, a group of 65 students who were unable to make it in-person for the fall semester, but who wanted to begin their time at Calvin online.

“I was relieved that I could still study [at Calvin] in South Korea,” said Hyuk Doo.

“I was more than grateful for the opportunity to start online,” said Fasusi.

“I was excited because I didn’t want to waste four months of my life,” said Dinberu.

In order to make this online cohort successful, it would take an army of professors, tutors, and student life workers to deliver a meaningful college experience online.

Marjorie Gunnoe, professor of psychology, was among the first group of faculty members teaching in the initial eight-week session. She realized this was the first impression of Calvin for these students, and so the stakes couldn’t be any higher.

“When I thought about how these students so wanted to be here but felt so disconnected and had all these obstacles against them, I knew I had to make them feel like Calvin students and give them a good experience,” said Gunnoe. “If their first eight weeks went badly, they probably weren’t going to continue in the next eight weeks.”

“I would make the videos the night before, and put them up by midnight or so, because I had students in Indonesia, and as I was going to bed they were getting up,” said Chris Moseley, associate professor of mathematics and statistics, who taught Calculus 1 in the second eight-week session. “If I didn’t have things ready for them at midnight, I’d get an email saying ‘Professor, I haven’t seen the email, can you put it out pretty soon?’ So, sometimes it meant staying up until 1 or 2 in the morning.”

“I’d work until 1 in the morning sometimes, then I’d go to bed, and they’d all be awake,” said Gunnoe. “Of course, I also had students in Grand Rapids, so there was no time when all my students were asleep. It was a constant barrage of emails. It was around the clock problem-solving.”

Growing as a community

It wasn’t just about delivering a quality educational experience to the first-year students, it was equally as important to help the students feel a sense of belonging to the community.

“One thing that made it successful is the way we were able to create community amongst the students,” said Vander Bie. “Once enrolled in their First Year Seminar class, they were in small groups led by orientation assistants, where they met online and talked with one another. So they had peer support in that way, and they were also meeting older students who knew Calvin already. This was important in helping students feel a sense of belonging.”

The students were surprised to see the kind of community that was being formed from a distance.

“I didn’t expect to make any connections during this period, but I couldn’t have been more wrong,” said Dinberu. “We had these small groups of 12 or 13 people. One was an upperclassman, and he was sharing his experience and just helping the rest of us through it all. So, that was really great. I definitely made connections, and I’m thankful for that.”

“At first, I thought I would never get close to any of the freshmen this year. I thought making friends virtually would be impossible,” said Hyuk Doo. “However, I was amazed that we could be friends even though we haven’t met each other in real life.”

“I saw the international cohort grow closer and closer every day,” said Fasusi. “It was one of the things where you are stuck with the same set of people for a long time, so you grow to love each of them. Connecting with people online was pretty calm, especially when they’re just a Zoom call away. It felt distant, yet close.”

The students weren’t the only ones who were pleasantly surprised by the experience.

“I saw a lot of persistence from the first fall session to the second fall session,” said Vander Bie. “We have this group of 65 students who were in the international online cohort who completed all these credits toward their degree, who feel they belong here, who want to come here, who have relationships with each other and with professors. It’s remarkable how successful it’s been.”

All 65 students who have completed the fall semester are planning to either join the Calvin community in-person or continue in the online cohort for the spring semester.

“Already from taking these online classes, I see that academically Calvin University surpasses my expectations,” said Fasusi. “And the astounding student-to-faculty ratio of 13:1 ensures personal attention from my professor. Calvin has an excellent online program; everything is set up nicely. You still get a chance to be a part of the Calvin community even without having to be on campus.”

“It’s been a pleasure to give these students that kind of avenue to join Calvin, even remotely or asynchronously,” said Moseley. “My students have been very engaged and are very happy to continue.”

“What worked with this is that we could bring campus to life for students earlier, create a sense of belonging before they come here,” said Braun. “Part of what we’re learning from this experience is what’s exciting,” said Braun. “All of this innovation is going to spark further innovation, different ways of viewing what we do, and how we do it.”

*Apply by January 1, and your application fee is waived