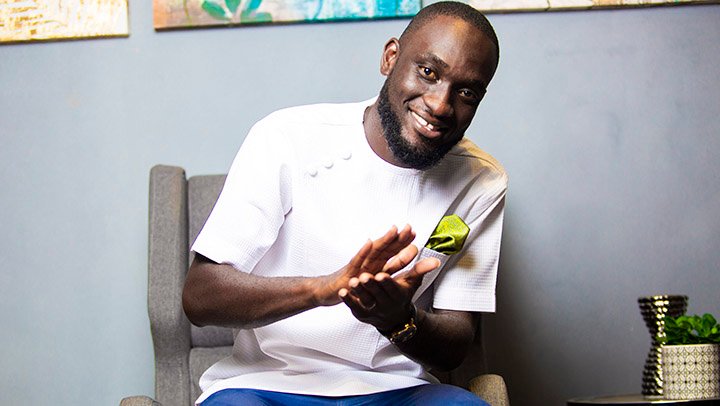 Nana Owusu-Achau, a 2012 graduate with majors in computer science information systems and business with a minor in engineering, has been striving to be an agent of change in his home country of Ghana, from using shipping containers to build luxury homes to starting Agro Kings, an agricultural company that produces local foods that are also exported globally—all while also investing in the youth in his community.

How did you decide on business and computer science as a major?

The liberal arts education at Calvin allowed me to take an information systems course in my first year which really piqued my interest. I found it so practical and saw that it could be of immense benefit to my country. In my freshman year, the engineering department organized a mentor visit to General Motors to meet with engineers. I realized that back home we were very far off from reaching that level of manufacturing and development and that it will require significant buy-in from governments and others to be at a par. With my goal to move back home upon graduation to help make a difference in mind, I decided to also study business to help round out my studies.

What are you currently up to? And what do you love about it?

I moved back to Ghana in 2012, and I’m currently the chief farmer in an agricultural firm. I started out in the real estate space where we designed and constructed buildings and handled sales and marketing of the same. In 2015, I ventured into agriculture, starting out with cattle and a maize farm—which didn’t turn out well. In 2018, while running my real estate business, I piloted a rice program in which I supported the rice production of two smallholder farmers. This was the first successful venture of my agricultural company, Agro Kings, and also one of the defining moments of my move back home. About five years later, my smallholder farmer network has grown, and this year we are working with 300 smallholder farmers. I absolutely love everything we are currently involved in, which contributes to impacting lives and making a difference on the continent.

Can you tell us more about your work with Agro Kings?

Agro Kings was founded after having discovered the under-utilization of Africa’s arable land, the abundance of resources on the continent, and the millions spent on the importation of food annually. Presently, we are working with about 300 smallholder farmers and have acquired 10,000-acres of land primarily for the cultivation of rice, alongside some vegetables, some legumes, a piggery, and a poultry farm. This helps us reduce wastage while creating a sustainable ecosystem in which the animals provide organic manure for the crops and the crops provide some food for the animals.

Currently, over 95 percent of the Agro Kings team is under 35 years old, following my fundamental belief in the capacity of the youth in Africa. Considering we are the youngest population in the world, it is imperative that we create more sustainable employment opportunities and help change the socioeconomic status of youth across the continent.

In our pursuit, we are continually innovating across the value chain and have taken active steps to add value to raw food produce. We are expanding our product portfolio beyond our flagship product “Nana’s Rice,” to include breakfast cereals, potato products, spices, and more. Some of our products are currently being exported to countries including the United States, the United Kingdom, and Belgium, with an offtake agreement to China and interests from other parts of the world. We’re also piloting a training and financing program for about 300 persons, which we believe would open up employment opportunities for over 1,500 youth across the continent. This pilot is expected to be completed by the end of 2022, and following its success, we should be able to replicate it in other parts of Africa.

What does it mean to be an agent of renewal?

Being an agent of renewal stuck with me and has been instrumental in shaping me and framing my thoughts. “Intentionality” is one word we heard frequently on campus, and I have found myself using it a lot as I work in Ghana and engage the youth, having appreciated the need to be intentional to make good progress. Being an agent of renewal, to me, means that we have been blessed by God and sent forth as ambassadors with a goal to renew whatever corner we find ourselves in. I recall the concept “Ta-panta,” which says that God has called us to be agents of change in all things, whatever we find ourselves doing. The Bible, in the book of Colossians, makes us understand that all things were made by Him (God) and for Him, and without Him was nothing made that was made. That tells us that as ambassadors of Christ, we have the responsibility of representing Jesus Christ on earth— being an instrument of change as He was while on earth. Having discovered, for example, that less than 10 percent of the arable land in Africa is utilized while we import so much food, I prompted other Calvin alumni to change the rhetoric of the continent. This made agriculture a focal area for me, and in 2015, I started taking active steps in the sector.

Was there someone at Calvin who had a big impact on you?

[Computer science professor] Patrick Bailey had a huge impact on me. One of the unique things about Patrick was his ability to bring his industry experience into the classroom. Academic advisory sessions were fun, and I always looked forward to them. We would discuss not only what needed to happen in the classroom but also what would happen after graduation and what it meant to be an agent of renewal. These were crucial for our entire experience, and he shaped a lot of my thinking.

[Business professors] Jason and Marilyn Stanbury stood out similarly to Patrick Bailey. The numerous practical case studies they brought in from their consulting backgrounds made their classes enjoyable and had an impact on me during my time at Calvin.

What is one of your favorite Calvin experiences?

One of my favorite Calvin experiences was an industrial visit to General Motors with the engineering class. The goal was to visit an actual company and meet with real people who served as mentors. This is one of the best things Calvin did for me and is something I actually practice to date. Whenever we decide to achieve something in my company, I resolve to find someone who has walked that path before and learn from them. For example, I recently embarked on a trip to Brazil in April 2022 to learn from others. While there are other countries that produce rice, Brazil has some of the largest commercial rice farms with similar climatic conditions to Africa and relatively good output.

What makes you proud to be a Knight?

What is your advice to students who are looking to make an impact?

I strongly believe like Steve Jobs said, that it’s easier connecting the dots backwards than it is connecting them forward. I do not think I could have fully predicted my impact in agriculture or sports or any of the other industries I have worked in had I been asked to. I think taking advantage of liberal arts education is key, as I find myself doing a lot more than what I majored in in school. Continuously learning and always striving to do your best are key to making an impact.