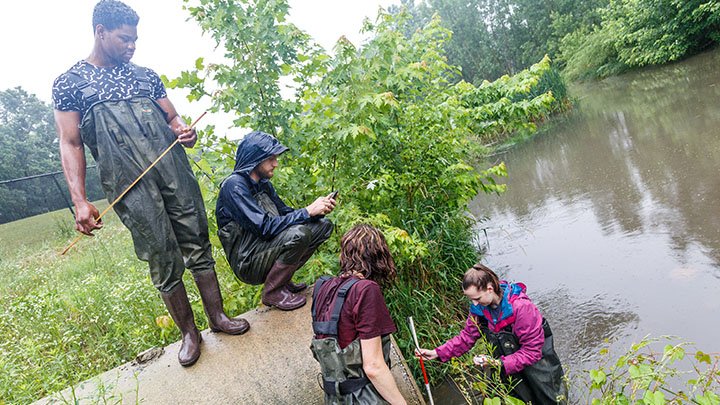 E. Coli, a largely harmless but occasionally dangerous bacteria present in animal and human feces, is found throughout the Plaster Creek watershed. The E. Coli strains present in the watershed from animal waste are likely the product of agricultural runoff. However, when it comes to the E. Coli from human waste, according to professor Kelly DuBois, “it’s really not known where that’s coming from.”

So, does DuBois, a professor of biology, intend to track down the source? “Based on how often they’re finding [E. Coli]—all over the place—it can’t be one source, so we have a really small chance of pinpointing all the sources and shutting them all down,” said DuBois.

Instead, she is working with a group of student researchers to assess if green infrastructure installations could be an environmentally safe solution. In particular, they are looking at the impact of Kreiser pond, a retention basin installed in a residential area of Grand Rapids four or five years ago, “which is essentially a U-shaped little pond,” built to slow rainwater runoff. “We know it slows the flow down, it absolutely works for that,” said DuBois, “but my question was: what is it doing with the microbes in the water?”

While according to DuBois, “it’s been shown in some instances that green infrastructure can be really efficient at removing bacterial contamination,” she hopes to prove that it’s effective in Plaster Creek’s case so that future green infrastructure projects in the watershed can be designed with microbial reduction in mind.

The project is in collaboration with the Plaster Creek Stewards, a group of Calvin faculty, staff, and students who have been working over a decade on the restoration of the Plaster Creek watershed. “It’s a fun group to be a  part of,” said DuBois, “because there’s so much collaboration, and everyone comes at it from a little different perspective.”

“As biologists, obviously, creation care is something that’s very important to us,” DuBois said, “I honestly love bench science, but it’s nice to have a project [where] it’s easier for students to see the direct connection with taking care of creation.” She added, “we can see, when we measure stuff in that water, that humans have had a negative impact on this little part of creation, and so it’s very practical to say we want to turn that around now.”

One of the student researchers, Kate DeHeer, a junior majoring in biology and biochemistry, has observed firsthand the positive community impacts of the Steward’s work: “we’ve only been out to the pond twice, but have met around five neighbors interested in our work.” She added, “they all seem to be fond of Kreiser and were happy to have it in their neighborhood.”

According to Tobe Ndika, a junior biology major with a pre-med concentration, “[this research] has made me aware of the need for stewardship towards God’s creation.” He added “I feel called to make the world a better place.”