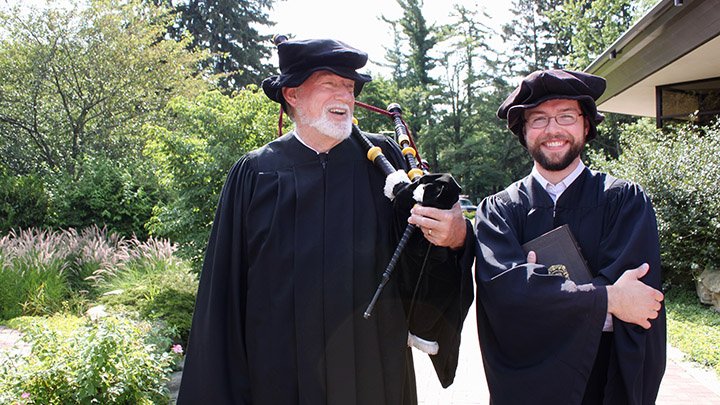 Striding forth from the leftmost chapel doors, John Calvin carried a set of bagpipes on his left shoulder as he approached Scottish theologian John Knox, his fellow reformer, friend, and apparent pipes mentor. Halting besides Knox’s podium, Calvin—played by piper Roger Billings—brought the instrument to his lips and released a salvo of bars from the doxology into the sizable audience.

This was the pinnacle of John Calvin’s 509th birthday celebration, held on the Chapel patio and hosted by the H. Henry Meeter Center for Calvin Studies. Prior to the performance, Knox—channeled by Calvin theological seminary PhD student Jacob Thielman—introduced his co-reformer, noting their shared theological connections and time in Geneva.

In the Calvin community’s more than 25 year tradition of officially celebrating the French theologian, reformer, and pastor’s birthday, this is the first celebration to feature bagpipes, although not for a lack of trying.

“For a long time, I’ve wanted to figure out a way to get bagpipes into the ceremony,” said professor Karin Maag, director of the Meeter Center and organizer of the yearly celebrations. “It can be challenging to keep this event new and fun for people.”

Typically, the birthday party features cake, drinks, and a two-minute speech delivered by a Calvin faculty or staff member in John Calvin’s stead, and is attended by around 100 community members present on campus over the summer. Maag noted that the ceremony has impressed visiting scholars to the Meeter Center, due to its strong attendance and genial atmosphere.

Maag greatly enjoys the tradition: “I like how it brings everybody together on campus; faculty, students, and staff.”