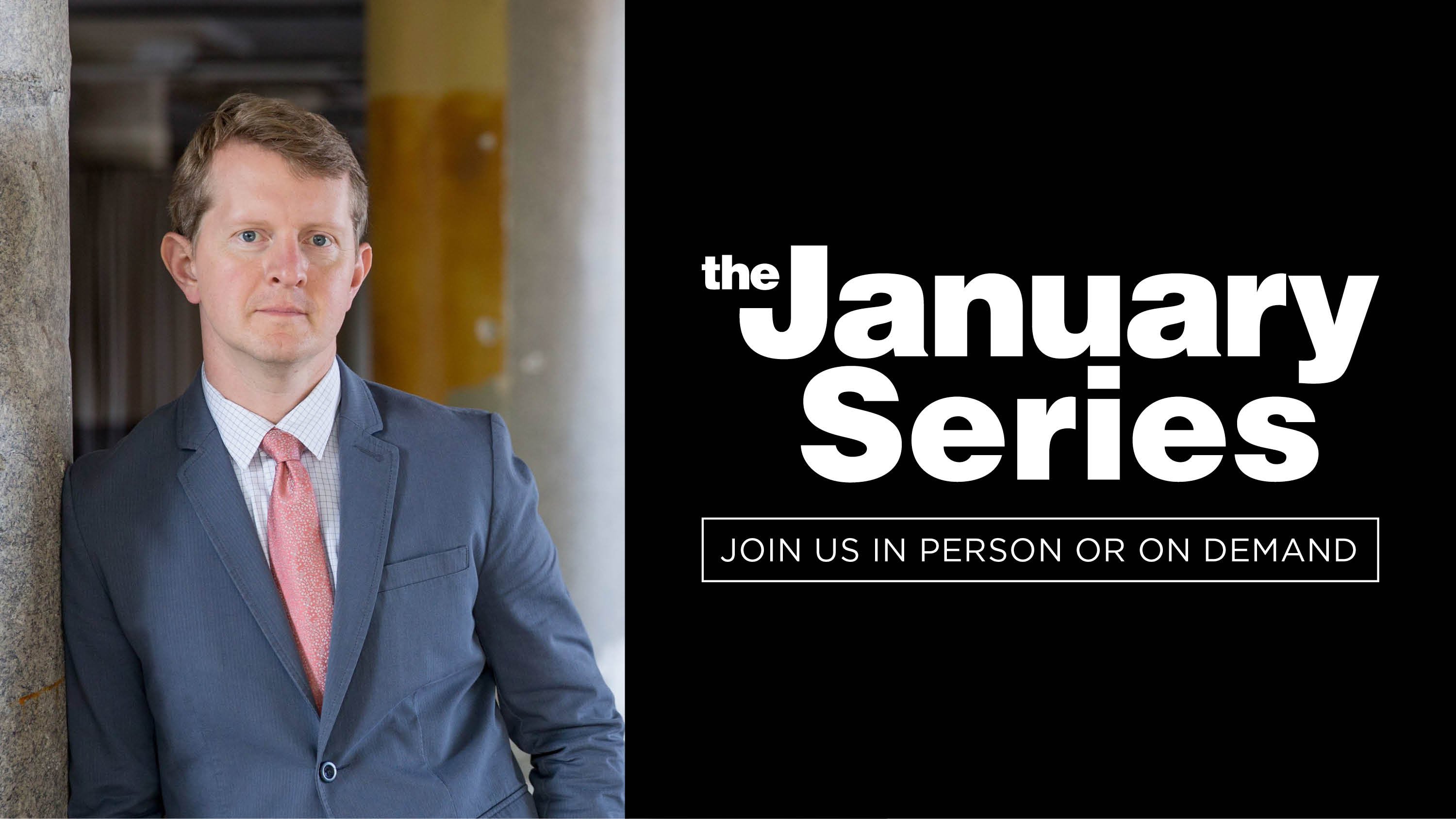 Ken Jennings, the winningest Jeopardy! player ever, will speak on Monday, January 23, 2023, as part of the 2023 January Series.

The 2023 January Series lineup is now set. A NASA scientist, New York Times best-selling authors, a former speechwriter for three U.S. presidents, and the holder of the longest winning streak on Jeopardy!, are among an eclectic lineup who will discuss some of today’s most important and timely issues.

A few of the notable names joining the series in 2023 include:

Michael Wildschut is in his inaugural year as director of the January Series. He has seen a theme organically develop for this year’s series that centers on thinking about how we can best care, engage, and connect with one another.

“We’ll learn from Ken Jennings about how having a wider range of knowledge can provide us a greater opportunity to connect with other people,” said Wildschut. “We’ll hear from Monica Guzman about how being curious can play a key role in building bridges during divided times. And we will hear from Amy Kenny, a leading scholar on disability, about how faith communities can cultivate a culture of welcome for people of all abilities.”

Join the conversation ... from anywhere

Each year, the  January Series welcomes a worldwide audience. In 2022, between in-person, remote, and on-demand virtual viewing, the series reached a record 100,000-plus viewers in 50 states and 52 countries spanning six continents.

“The number of people who are joining us speaks to both the quality of the programming we offer and the accessibility of these talks,” said Wildschut. “When we learn more about the world and discover more about ourselves, we will hopefully become a richer version of ourselves and in doing so be better equipped to make this world a better place for all.”

The January Series runs from 12:30 p.m. to 1:30 p.m. EST Monday through Friday in the Covenant Fine Arts Center on the campus of Calvin University. In 2023, attendees will also be able to watch and listen to the 15 noontime presentations virtually both live and until midnight PST on the day of each presentation at www.calvin.edu/january. Dozens of remote webcast locations will also stream the series live. Find an updated list of viewing locations on the January Series website.

About the January Series

Started in 1988, the January Series is an annual, award-winning, 15-day lecture series that exists to cultivate deep thought and conversations about important issues of the day in order to inspire cultural renewal and better equip global citizens in God’s world. The series is free and open to the public. Join this year’s conversations and revisit previous talks at www.calvin.edu/january.

Founded in 1876, Calvin University is a top-ranked, liberal arts institution that equips its nearly 3,200 students from 48 U.S. states, 55 countries, and five Canadian provinces to think deeply, to act justly, and to live wholeheartedly as Christ’s agents of renewal in the world. Calvin is proud to offer 100+ majors and programs, including a growing number of graduate-level programs. Calvin students engage in intensive internships, community-based service learning, and significant research that results in publishing and presenting alongside world-class faculty.