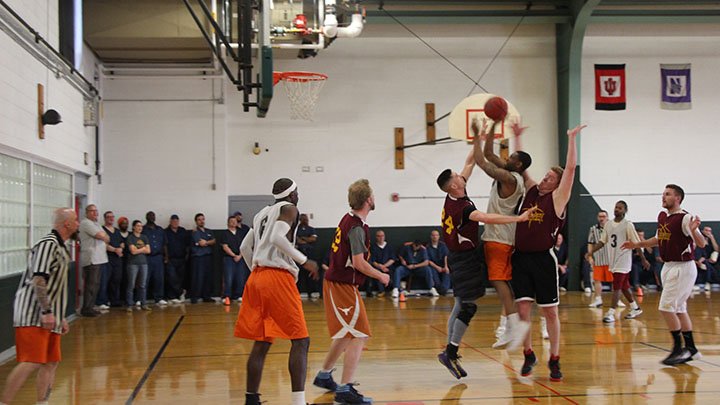 “Seeing people that actually view and treat us as human beings is like a wake-up call—it’s exhilarating.”

Larry, an inmate at Richard A. Handlon Correctional Facility, is one of the many inmates who shared this sentiment after the prison’s first basketball game on April 25 against Calvin alumni basketball players.

In Handlon prison’s gym, 50 inmates participated in the event as spectators and referees, even running the Calvin flag up and down the court. The game was complete with popcorn, occasional spurts of hip hop songs, and an announcer calling the plays over a microphone. After a hard-fought game from both sides, Calvin won 118-81.

Competition, conversation and laughter were exchanged between the inmates, players and spectators, but, as Larry expressed, this event held far more importance than the average basketball game.

A presence deeper than academics

Calvin has been in partnership with Handlon since 2011, when Calvin College and Calvin Theological Seminary began a partnership in offering unaccredited classes to inmates. Since fall 2015, though, inmates have been working toward a five-year, accredited bachelor of arts degree in ministry leadership through the Calvin Prison Initiative (CPI).

With increasing synergy between Calvin’s Knollcrest and Handlon campuses, Handlon’s Warden Burton came up with the idea for the basketball game. “The warden has a vision that prison can be not just a place of punishment, but also a place of rehabilitation, and a huge part of that is treating the inmates like human beings,” said Christiana de Groot, co-director of the Calvin Prison Initiative and a professor of religion at Calvin College.

CPI program assistant Julie Bylsma said the basketball game was just one part of CPI’s goal to bring a human touch to the prison system. “By working closely with and building relationships with the students, prison staff and other inmates, we create a presence in the facility that goes deeper than the academics. The basketball game is a perfect example of that deeper work,” Bylsma said. “These shared experiences can't be bought­—building trust and friendship between the two administrations is indispensable to the flourishing of the CPI program.”

Changing the prison system from the inside-out

CPI students are drawn from the 31 prisons which house men in the Michigan Department of Corrections system, and each summer, the admitted students transfer to Handlon. Thirty-seven inmates are currently enrolled, earning 16 credits in two semesters. In September 2017, 20 additional inmates will begin their first year as Calvin students.

Two-thirds of the students will be in prison for life, and de Groot said CPI has made a point to welcome and accept them into the program. “Our vision is both to help those succeed who are leaving prison, and also to work within the prison culture itself and make it a different kind of place. Some lifers decide the prison is their mission field. We hope that when they leave Handlon (as some will be transferred to other correctional facilities in Michigan after graduation), they will be informal pastors and change the prison system from the inside-out.”

Powerful for both teams

Nathan Drews, a senior at Calvin College, said the basketball game was a great experience. “I was amazed at how excited both Handlon's basketball team and the other inmates were to have us come and play,” Drews said. “They came out and played really hard; it was a great atmosphere to play in. So many players and inmates came up to me after the game and thanked me profusely for playing. Overall, it was a humbling experience and one I hope we can continue.”

Inmate JB said the game was an experience of a lifetime, especially as an avid fan of the men’s basketball team. “I was telling one of the Calvin players that I watch the Calvin basketball team all the time, and I’m one of the biggest Calvin fans in the Calvin-Hope rivalry,” he said. “Overall, it was a good game. It was our first time really playing with each other besides in open [recreation], so maybe next time we’ll be better. I want a rematch!”

Opportunities for CPI student involvement have been increasing, as the students were able to vote in the student senate election this past week, as well as submit content to Dialogue, Calvin’s student magazine. In addition, Handlon students also write articles for Calvin’s student newspaper, Chimes, and have created their own campus newspaper: The Calvin Sentinel. CPI administrators also hope the basketball game becomes an annual event.