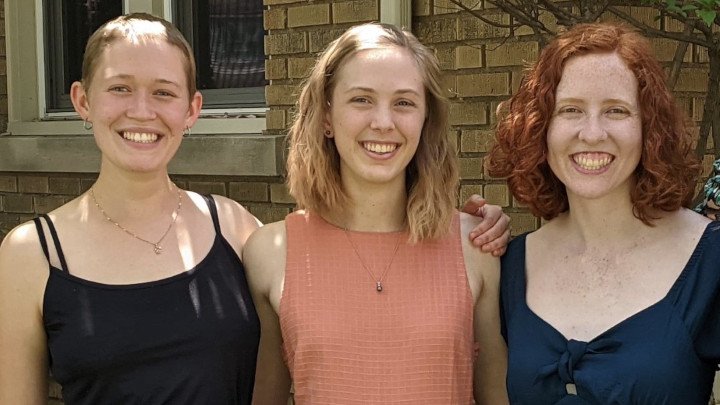 From Left to Right: Bethany Williams, Emma Tongue, and Katie Haan '21, the 2020 student residents of the Fuller Project Neighborhood House who decided to live together after graduation.

In fall 2020, then-seniors Emma Tongue, Bethany Williams, and Katie Haan joined Project Neighborhood (PN), an off-campus residential opportunity at Calvin where sophomore, junior, and senior students live together in intentional Christian communities in four different houses in Grand Rapids: Fuller, Harambe, Koinonia, and Peniel. Each house has at least one mentor. The mentors are in their late twenties and early thirties.

According to Jay Wise, Calvin's director of college housing and operations, life at PN is about “vibrant community, loving neighbors, purposeful discipleship, committed sustainability, and attentiveness to the ordinary.” Requirements include at least one house meeting, devotional time, and shared meal per week as well as one communal church service per month and twenty hours of service learning per semester.

However, there’s also plenty of “unstructured time” that helps create lifelong memories—this past year, highlights included bonfires, deep conversation, dumpster diving, game nights, gardening, sledding, wedding dress shopping, and more. Fuller House mentor Hannah Bechtold said that having “people to hang out with and be goofy and silly with” is one of the things she appreciates most about PN.

Overall, Wise says that students have discovered that “they lived out Calvin’s mission most closely when they were living in a PN house.” This was the case for Tongue, Williams, and Haan, and the reason why they wanted to continue their PN experience even after they left the Fuller House.

“It really made a difference having that shared commitment to not only living in the same space, but weaving our lives together in a way that made everything feel more meaningful,” Williams said. “It made the hard parts a little easier. And the great parts that much cooler.”

Haan says that she recommends the living-learning community to anyone who’s “remotely interested” in it.

“I just want to bring Project Neighborhood up anytime. I'm encouraging people to join,” she said. “Totally do it. It's awesome.”

Although it was hard work, Tongue, Williams, and Haan knew that they didn’t want this way of life to completely end. They eventually found a house to rent together in Eastown (a few miles from main campus) after graduation and resolved to continue their own version of the living-learning community.

Although Tongue, Williams, and Haan knew of each other before Project Neighborhood, they only got to know each other on a more personal level after living together in that community.

“Bethany, Katie, and Emma are just a testament to the fact that you can know no one or just one of the people you're living with and come out on the other side the best of friends,” Bechtold said. She mentioned how the three shared many “random, spontaneous moments” that were a lot of fun, including a pumpkin-carving dance party and some late night restaurant trips.

Since the women each came from a different academic background—Tongue in the arts, Williams in the sciences, and Haan in the social sciences and humanities—they had very minimal interaction with each other in a classroom setting during their time at Calvin. Despite their wide range in vocations, the women have discovered that they can still understand and support each other as they start their careers and embark on their next chapter in life.

“All our jobs are very different, but we're all still feeling—‘I have no idea what I'm doing!’” Haan said. “Just being able to encourage each other and know that we're all going through that together is really nice.”

“The reason that we ended up all living together and are enjoying the situation is because we recognized that we enjoyed what we had and we decided to talk about keeping that going,” Tongue said. She advised other Calvin students to do the same: “If there are people that you really enjoy being with and you don't want to lose touch with them, be intentional about that. Reach out to them and find out what they're doing for housing, because you'll never know if you don't ask.”

In Haan’s case, PN turned out to be instrumental in helping her find a job she enjoyed in her field after her graduate school plans fell through. Bechtold told her that she should apply for a case manager job at Interact, an organization that works with people with psychological disorders.

“Her encouragement to pursue that job was really helpful,” Haan said.

Bechtold also put Haan in touch with one of her friends who’s employed there. Haan emailed the friend, asked him some questions, applied, and got the job, which she says was “really exciting.”

Because the PN housing is located outside of Calvin’s campus, Tongue, Williams, and Haan had the chance to more deeply explore Grand Rapids. This proved to be helpful after they all decided to stay in Grand Rapids after graduating.

“You get to know Grand Rapids and get involved in things in the city outside of Calvin a lot more than you would like being on campus,” Haan said. “There's so many more roads that I know because of Project Neighborhood. The world opens up so much—there’s all these things that I never knew were going on.”

Although PN may have opened the door to the greater community, Tongue is “excited” to go further and get more involved.

“I've started volunteering with Circle Theatre in town,” she said. “I’m just trying to find out—what are those cool hidden things in Grand Rapids that I haven't been aware of before?”

Bechtold agrees. “I think Grand Rapids is such an amazing city. And there's so many interesting things about it. And so [I love] being able to show students how to engage in different issues, whether it's just building awareness or actually getting involved. Project Neighborhood is a really good place for that to happen.”

Embracing a New Way of Life

Perhaps most importantly of all, PN taught Tongue, Williams, and Haan admirable practices and routines that they’ll likely carry with them the rest of their lives.

“We have continued doing house meetings every week,” Tongue said. “We've continued sharing grocery bills. And we baked cookies for some of our neighbors the other week to introduce ourselves and get to know them a little bit more.”

One of their most treasured traditions is cooking meals for one another and eating dinner together.

“Eating food that your housemates cook for you, instead of just having to cook all your own food, is amazing,” Haan said. “I greatly appreciate it.”

Bechtold was “excited” to hear how the three women have embraced PN traditions in their post-grad life.

“I remember those conversations; they were trying to figure out next year: ‘what do we do?’ And then them saying, ‘let's live together and keep this up.’ It's not always easy or fun, but it's such a necessary skill to live with people. And most people want to do that. So it's great that they've kept up those habits,” she said.

If you'd like to apply to PN or learn more about it, please send an email to housing@calvin.edu. If you're interested in other upperclass housing options, visit here.