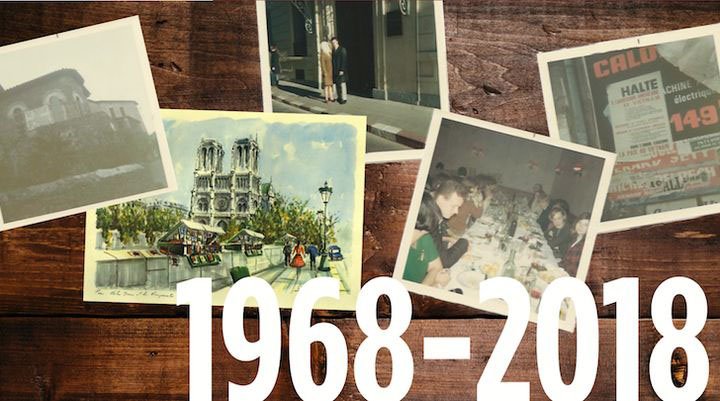 This year, the Calvin French interim celebrates its 50th anniversary. In 1967-68 Calvin College implemented a new academic calendar that for the first time included Interim—a three-week January term. Taking advantage of this new opportunity, Professor Art Otten, chair of the French Department at the time, decided to organize Calvin’s first-ever interim abroad to Paris and Montpellier.

This first interim abroad—costing approximately $500— consisted of four-and-a-half weeks in France, with a three-day excursion to the chateaux of the Loire Valley. The course included advanced language, lectures by French authorities on language, literature and culture, as well as visits to important monuments and museums.

“Last New Year’s Eve, I shared with friends that exactly 50 years ago, I was in Paris, on the Champs-Elysées celebrating New Years Eve,” said Calvin alumna Lucie Commeret Marsden ’71. “I was a 17 year old kid from New Jersey, a Calvin College freshman, on the first interim abroad offered in the new 4-1-4 curriculum.”

“Paris was pure magic. We went to the Church of Notre Dame on New Year’s Eve and then walked down the Champs-Elysées in total awe,” said alumna Barbara Schwarz Vanderkolk Gibbs Gardner ’70.

This inaugural interim trip will always be a cherished memory, said Gardner. “I will forever be grateful to Calvin College and my fellow student travelers,” she said. “It nurtured a love of the country and its people that has resulted in my taking more than a dozen trips to France. I started taking my son with me when he was only three years old. I will never forget the day he said as a ten year old to his much older step-sister, “Let me show you my favorite places in Paris!”

“In all, it was a marvelous experience. And to think how many abroad programs there are now is amazing. We must have set a very good precedent. So you’re welcome,” said Marsden.