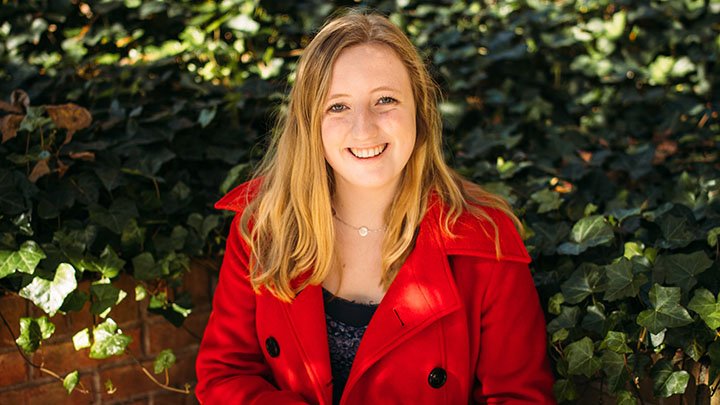 Annefleur Muller of the Netherlands is studying for a year at Calvin on a Fulbright Scholarship.

Although Calvin has an outstanding record of sending scholars out to all corners of the world through the Fulbright Program, the college has now received its first ever Fulbright scholar: Annefleur Muller, an 18-year-old from the Netherlands.

After finishing high school at Dalton Den Haag in her hometown, The Hague, Muller wasn’t sure what she wanted to study in college. “In the Netherlands, you have to decide to study one subject at university. If you don’t like it, you have to stop and start over again,” Muller said. “I didn’t know what I wanted to study yet, but the Campus Scholarship Program [by Fulbright] was offering a gap-year in America for Dutch students, so that’s what I decided to do.”

Thus, Muller wrote an essay and was interviewed for a Fulbright Scholarship to study abroad. Once accepted, she was given a list of 10 schools based on the interests she expressed in her application. She then applied to four schools, including Calvin, and chose Calvin after being accepted. She also received financial aid with the Gertrude Pott Zwiep Scholarship for freshman students from the Netherlands, Germany or Hungary.

Before coming to Calvin to study, though, she’d already been on campus. Two years ago, during a family trip to travel around the United States, her family visited her distant Dutch relatives that live in Grand Rapids, who gave her a tour of Calvin.

“I liked that Calvin was in a bigger city; I like Grand Rapids, and that you can get [downtown] by bus. I liked the classes Calvin offers, and the idea of being near family was nice," she said.

Well traveled, with many interests

This transcontinental transition to Calvin was nothing new to Muller. She lived in China from birth until 3 years old, and in Ghana between 8 and 11 years old. Besides those two periods, she has lived in The Hague, Netherlands. Since Muller’s mother works for the Ministry of Foreign Affairs, she receives a new position every four years, which is what had led her family to China and Ghana. Her family consists of her two sisters, Elske (16) and Kiki (13), her mother and her father, who is an engineer.

So far, Muller has been able to test the waters in a number of interests through Calvin classes. “At Calvin, I can try out different subjects and see what I like, but also learn about American culture and live a year abroad,” she said. “It’s a very different culture here than back home, so it’s nice learning while taking classes.”

This fall, she is taking classes in architectural history, English, psychology, American culture and photography. “I’ve never done photography before, and I really enjoy that class. I’m thinking of taking sociology or international development next semester,” Muller said.

The liberal arts education at Calvin has been helping Muller navigate her passions;  her experience in her residence hall, Rooks-VanDellen (RVD), has been formative as well.  “I’ve been having a great time being at Calvin and in RVD—everyone is very friendly and nice!” Muller said.

She enjoys being on the Social Events Team in RVD, as she has the opportunity to coordinate floor events. She has also been able to explore Michigan with friends through things like backpacking in Manistee and visiting Holland. “I’ve been to Holland a few times because I have friends who live there, which I think is funny that there’s a city named after my country,” she smiled.

Muller has come to find many differences between the Netherlands and the United States already in her few months here. “I think people are less direct and overall more excited here,” she said. “In the Netherlands, it’s also much more common to take a gap year to see what you like, and not study straight away. People here also seem to get married straight out of college, but that seems pretty young to me,” she laughed.

Muller plans to attend a university in the Netherlands after she finishes the 2016-2017 school year at Calvin, and is optimistic that she will have a better idea of what she wants to study based on her experience here.