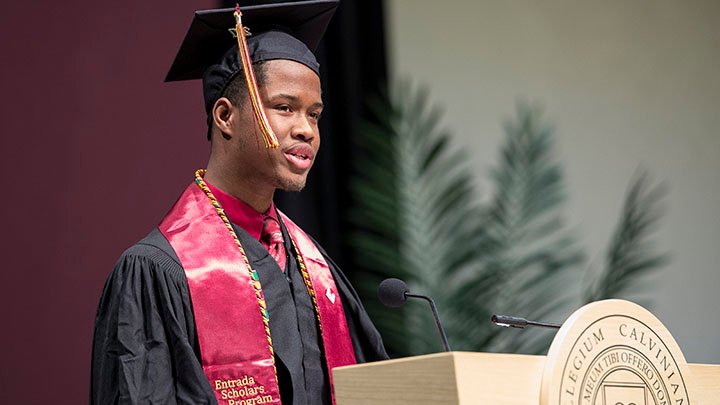 Bill Warners, a graduate of the Entrada Scholars Program, offered remarks at the 2017 Commencement ceremony as the student body president.

In January 2019, Calvin’s Entrada Scholars Program became the third recipient of the Dr. Clifton Rhodes, Jr. Community Recognition Award, conferred annually by the Baptist Fellowship of Grand Rapids to organizations whose work improves the quality of life of African Americans in Grand Rapids.

“There are a number of different organizations trying to do something for people of color or youth that may not go recognized, so we’ve come together as a fellowship of 16-plus churches to bring those organizations to the front of the crowd,” said Gaddis, who noted that the Entrada program had multiple people give powerful testimonials suggesting the program for the award.

“Ultimately, we just want to say 'continue the support, we appreciate any organizations that help to lift up people in need,'” added Gaddis.

The Entrada Scholars Program invites high school students from racial and ethnic minority backgrounds to experience the Calvin community through a month of living and learning on campus over the summer. While on campus, students take a class, have access to academic coaching, and engage in a number of community activities with their peers, including several service projects.

Nygil Likely, who has headed the Entrada Scholars Program for five years as director of college access programs, said that the program has been effective through its combined focus on bolstering academic preparedness and providing access to campus. “The opportunity to get students to Calvin early, build relationships with them, and connect them to campus is really the key to Entrada’s success,” he added.

“Receiving the award validates the importance of the Entrada Scholars Program for the larger Grand Rapids community,” said Likely. “It recognizes the impact that Entrada has had through providing minority students exposure and access to higher education.”

Beyond recognition, Likely noted the award “positions Calvin well in the community as a partner, a leader, and an organization concerned about creating access and leveling the playing field for all students to have access to higher education.”